No one on Eternia knows where THRASHOR came from or what side he is truly on. But rumor has it that Skeletor used his foul magic to bring THRASHOR back from the grave. Skeletor had planned on creating a powerful zombie that he alone could control but THRASHOR's will was stronger than Skeletor had anticipated. THRASHOR shattered Skeletor's controlling spell over him using his prized POWERGLOVE. Making a hasty escape on his skateboard, THRASHOR disappeared into the night and out of Skeletor's clutches for good.

THRASHOR now roams Eternia in search of clues to who he was and how he died. Never truly living but not truly dead, this tortured soul finds solace only in skating. THRASHOR can sometimes be seen on dark and misty Eternian nights, skating by the glow of the moon... 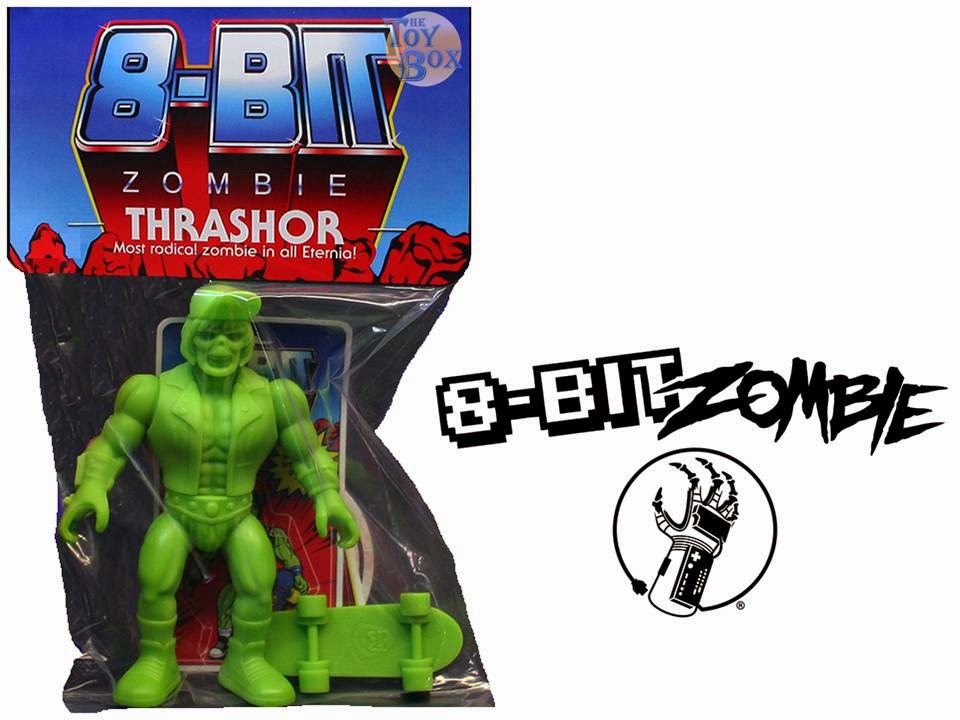 Thrashor is the creation of Alanbernard and 8bz - The curator(s) of 8-Bit Zombie. Though we wouldn't normally focus attention on unlicensed "knock-offs", there is some charm to the character Thrashor. From his well thought out back story, to the overall look and design, he brings with him something more than your typical custom, and yet strays far from being a straight up "bootleg" of an already existing figure. Thrashor does indeed feel like he could fit right in with your heroes and villains of Eternia - Nay, that he actually belongs with them.

The original Thrashor figure was produced in what appears to be a very limited quantity. It had an all green paint scheme, and came bagged. These days the figure is incredible difficult to find - In fact, we have yet to see one at all on secondary markets. Now that we type that sentence, truth be told we've never seen any versions of Thrashor on secondary markets.

With the success of the initial release, 8-Bit Zombie produced a second version, this time producing a nice cardback as well as giving Thrashor a good paint job. In addition to that, the figure was produced in two variant formats - The first, Toxic Glow Thrashor, and the second, Ghost Glow Thrashor. 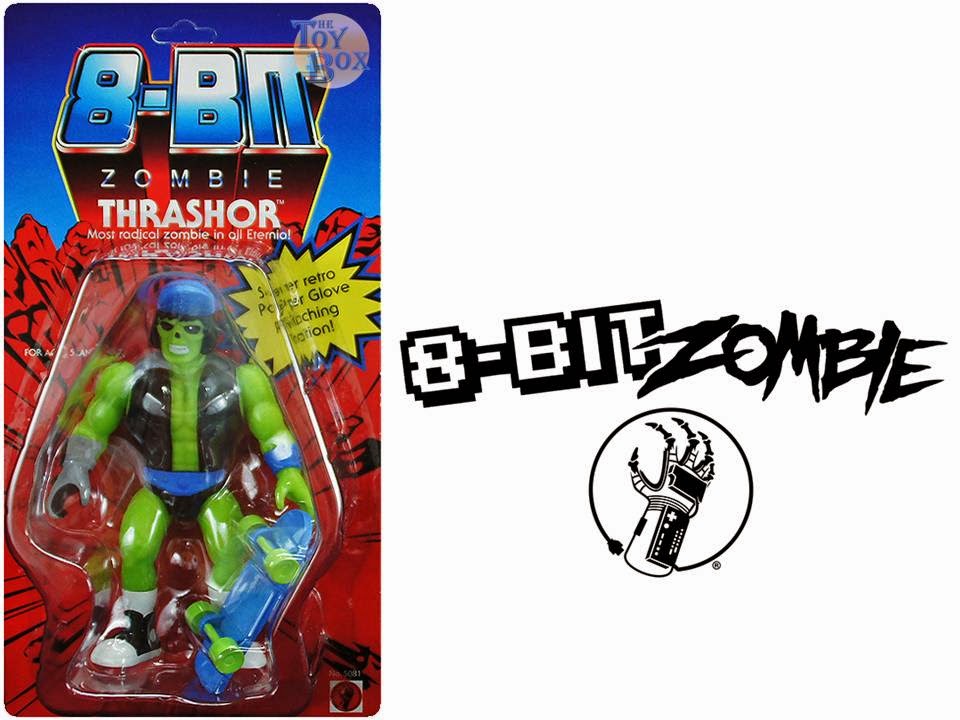 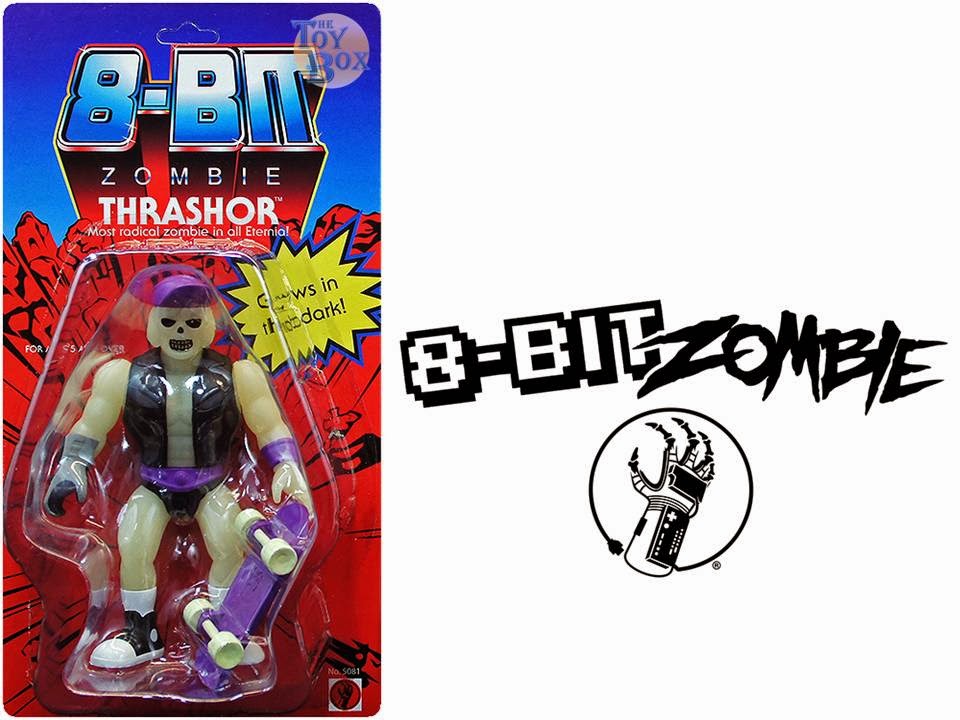 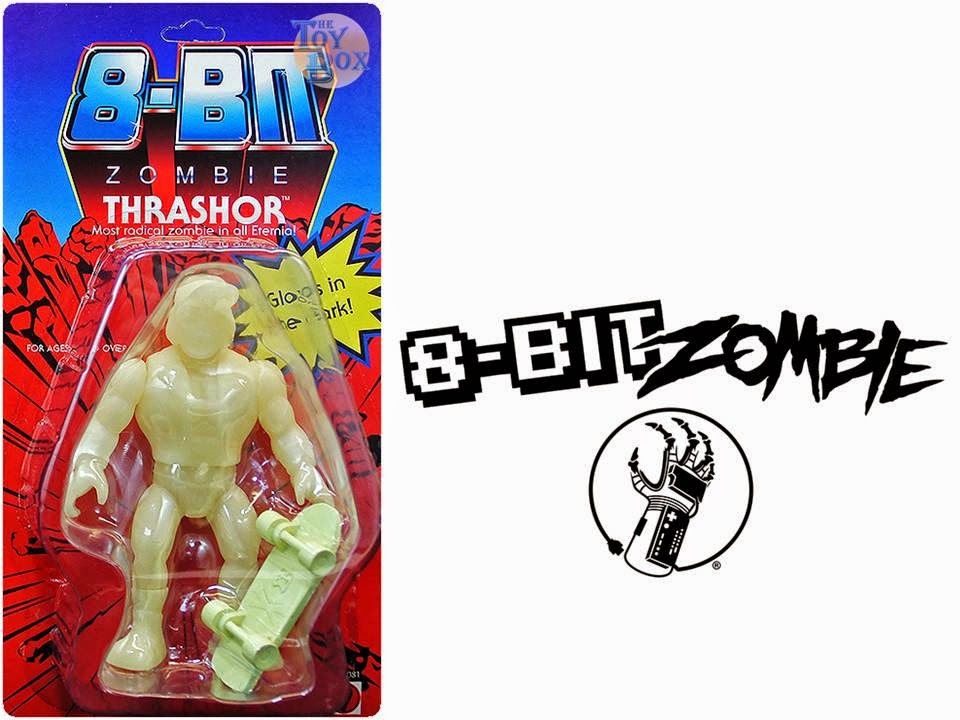 
If we had to be honest, the biggest problem we have with these figures is the price. 8-Bit Zombie is asking for $175.00 for a set of the three carded figures above (breaks down to $58.33 each). No matter what realm you live in, that's a hefty price for three action figures. Thrashor here is definitely going to be for the die hard elites that are craving everything they can get MotU related - Be it official or unlicensed.

Join us next time when we take a look at Spider-Man - Vampire Wars!


Click "HERE" to go back to the home page. For more posts related to this one, please click the labels below.
Posted by The Toy Box on November 12, 2015
Email ThisBlogThis!Share to TwitterShare to FacebookShare to Pinterest
Labels: 2010's, 8-Bit Zombie, He-Man, Masters of the Universe, Mattel, Thrashor