A Nightmare On Elm Street
Matchbox
1989

Ah, the classic hack and slash horror icons of the 80's. Michal Myers, Jason Vorhees, Chucky - The list goes on and on - And of course includes the infamous Freddy Krueger. 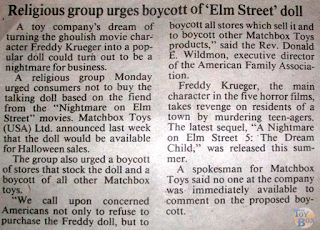 Today we're going to take a look at two separate A Nightmare on Elm Street series from Matchbox. The first is their classic Talking Freddy Krueger doll.

On today's markets, a Freddy Krueger doll would do (and has done) fantastic in terms of sales. However, in 1989 nutty groups were everywhere ready to protest the slightest thing. Matchbox found themselves in such a predicament, and after numerous complaints from the American Family Association the doll was yanked from shelve.

Unfortunately when it's the 1980's, and you create a doll based on a character that was born of a raped nun, and burned by a community for molesting children, people oddly enough have a problem with this for some reason. Despite this, many folks must have gotten their hands on them some way or another as there have been numerous dolls available both open and sealed on numerous secondary markets.

The doll measured eighteen inches high, and featured Freddy in his iconic red and green sweater - And of course the hat. On his right hand was his razor glove. In short, there was no mistaking this doll for who he was supposed to be. 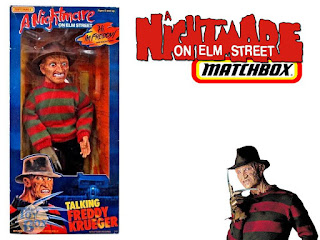 On the back of the doll was a pull string, which activated it's talking feature. Freddy would say one of six phrases - Albeit some were very out of character;

Pretty hit or miss in terms of what you would expect to hear from Freddy's mouth. 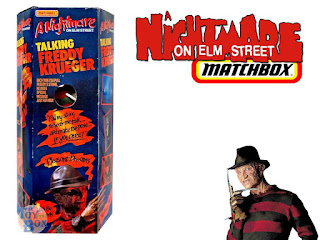 Freddy was incorporated into the MAXx FX line in 1989, and actually released prior to the talking Freddy doll. It consequently suffered the same complaints as the aforementioned one.

An entire series was planned under the banner which would have included Dracula, Frankenstein, and the awesome looking Alien from the movie of the same name. Sadly only Freddy made it to store shelves - Briefly of course. 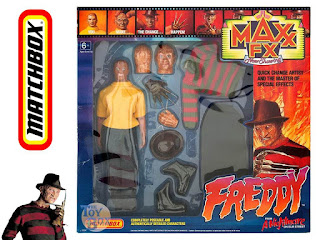 While we'd love to say more on these particular dolls, truth be told, we really can't say it better than it comes straight from the horses mouth, Mel Brinkrant. For a fuller history on these dolls, we highly recommend that you visit his site. 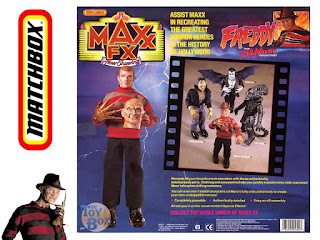 Join us next time when we take a look at Edward Scissorhands!


Click "HERE" to go back to the home page. For more posts related to this one, please click the labels below.
Posted by The Toy Box on November 23, 2015
Email ThisBlogThis!Share to TwitterShare to FacebookShare to Pinterest
Labels: 1980's, A Nightmare On Elm Street, Freddy Krueger, Matchbox, Robert Englund