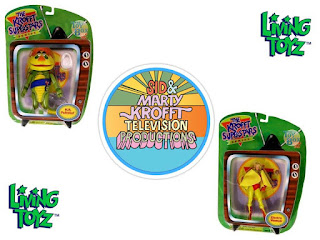 The best part of The Krofft Superstars series is that it doesn't encompass just one source for the figures. Instead, it's made up of some of the cast / characters of three television series developed by Sid and Marty Krofft's; H.R. Pufnstuf, Sigmund and the Sea Monster and The Krofft Supershow.

The 70's were a good time for variety shows. It was an easy way for networks to massively dump "talent" onto airways for massive blocks at a time. Be it Carol Brunett, Andy Williams, Dick Van Dyke, Sonny and Cher or the television family, The Brady's, there was big money involved. As such, it was only natural that variety shows would also make their way into the Saturday morning cartoon scene. Enter Sid and Marty's The Krofft Supershow.


The first half of season one encompassed a full ninety minutes of "skits" (or segments if you will) featuring characters such as Dr. Shrinker, Electra Woman, Dyna Girl, and many other. The show was hosted by the band, Kaptain Kool and the Kongs - A band which was manufactured by studio execs specifically for the show. Before the season would end, the show was shortened to sixty minutes, and dropped the aforementioned characters above in lieu of Bigfoot and Wildboy, and Magic Mongo.

During the shows 32 episode run, more changes came down the pike, including the band dropping one member for season two, and then eventually being replace in full by the Bay City Rollers - A popular Scottish pop band of the era for their hits Saturday Night, Shang-A-Lang, Summerlove Sensation, and more.

Probably the most well known character created by the Krofft duo was Mr. H.R. Pufnstuf. He was the star of the very first live action star from the brothers, and despite running for just seventeen episodes became a pop culture icon.

The series evolved around the tried and true fairy tale premise of good vs. evil, and featured a cast of puppets, actors in foam suits and live actors. The show centered around the boy, Jimmy (portrayed by Jack Wild) who has been shipwrecked on Living Island. Because everything on Living Island is alive, almost everything that could be used as a character was used as a character - Often voiced in a parody fashion of the popular actors and actresses of the early 70's.

The show featured numerous characters such as; Cling and Clang (as portrayed in this particular action figure line), Wilhemina W. Witchiepoo and of course H.R. Pufnstuf (alongside numerous others).

Fun fact - Though Jack Wild portrayed and eleven year old on the show, the actor was actually sixteen.

Sigmund and the Sea Monster 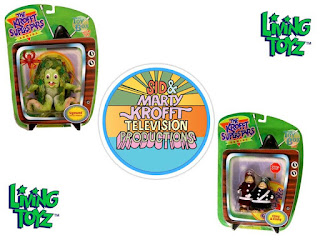 After the days of H.R. Pufnstuf, but before the Krofft Supershow, there was Sigmund and the Sea Monster.

The show centered on two brothers,Scott and Johnny, who discover Sigmund, a friendly little sea monster who has been thrown out by his family for refusing to be frightening. As such, the boys take to hiding Sigmund in their clubhouse in order to keep him safe.

(Photo: Sigmund and Cling and Clang)

Most of the episodes featured Sigmund doing something silly in order to arouse attention, and the boys working to cover up what he's done to keep him a secret. Each show incorporated songs to move the plot development along - Mainly comprising of songs to depict what Johnny was thinking.

Sigmund and the Sea Monster also became the Krofft's first series to be picked up for a second season. However, after twenty-nine episodes, the show had run its course, and was take off the air.


Join us next time when we take a look at Print Putty!


Click "HERE" to go back to the home page. For more posts related to this one, please click the labels below.
Posted by The Toy Box on July 30, 2015
Email ThisBlogThis!Share to TwitterShare to FacebookShare to Pinterest
Labels: 2000's, HR Pufnstuf, Living Toys, Sid and Marty, The Krofft Superstars Series, The World of Sid and Marty