Flaming Carrot was a character we personally got introduced to in 1993 when he was featured in a crossover with Mirage Comic's Teenage Mutant Ninja Turtles. Though we don't really recall if the story was good or not at this point, we do know that it was enough to intrigue us in the character in general, and seek out more stories. 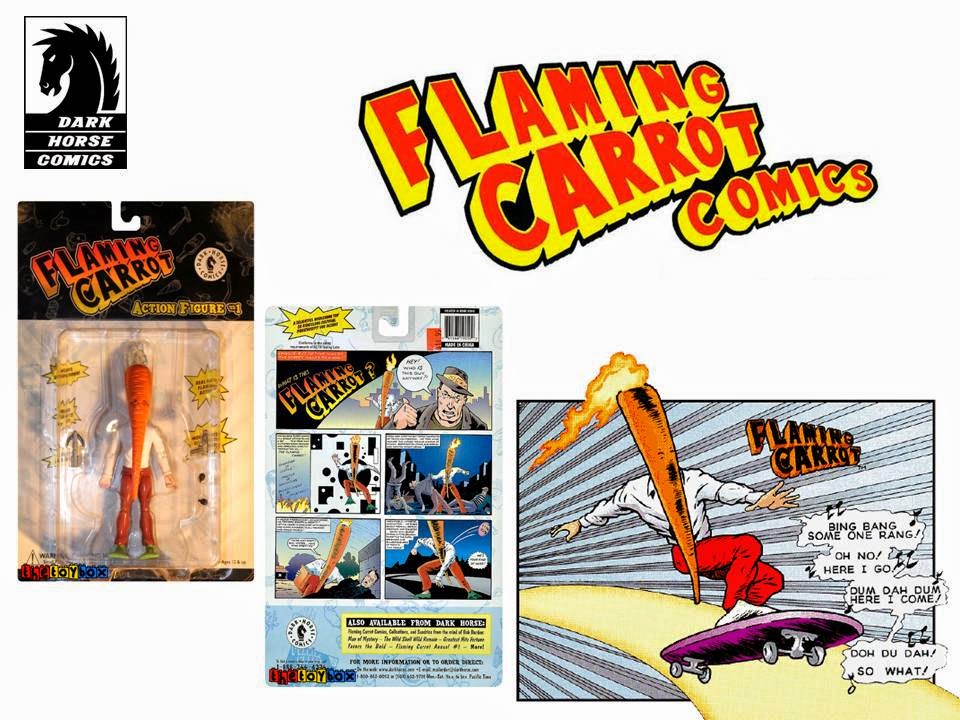 Bob Burden created Flaming Carrot back in the 1970's and his first appearance in comic form can be traced to Visions number 1 - A magazine published by the Atlanta Fantasy Fair in 1979. Since then, he has been featured in numerous volumes of his own title published by Dark Horse and Image Comics, and is even credited as a founding member for the group Mystery Men. Wouldn't that have been awesome if he was in the movie?

The "hero's" origin story depicts him as your average everyday comic book fan who on a bet read 5,000 comics back to back. Unfortunately this caused him to suffer brain damage, and thereafter he appeared directly as the Flaming Carrot. He has no super power, just a large carrot mask that lights on fire, and has a storage compartment for his nuclear pogo stick - an invention from Dr. Heller of the Mystery Men. Carrot also wears a utility belt akin to that of Batman. However, unlike Batman's belt which contains several useful gadgets, FC's is stuffed with the likes of rubber bands, sneezing powder, silly putty and random playing cards - All of which are deadly weapons in his hands. 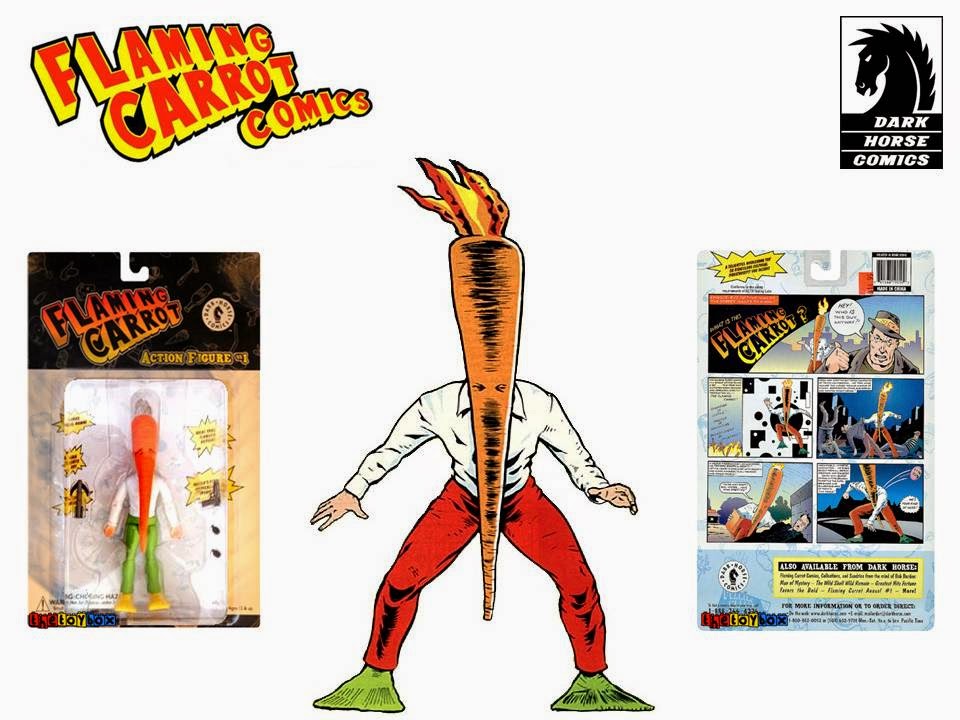 When Dark Horse Comics began developing and releasing action figures based on their own brands, one of the choices was Flaming Carrot. Though only one figure was produced, it can be found in two variations - The regular figure which has red pants, and a chase variant with green pants. The figure came packed with a few accessories; a hook launcher, pistol and two grenades. The top of the carrot also featured an LED/battery feature that allowed it to light up showcasing the flaming feature.

Though the front of the card was rather plain, a unique feature on the back of the card was that it contained an origin story under the title of "Man on the Street Wants to Know! What is This Flaming Carrot?" Because the character is so obscure to many people, this was a nice added touch. We especially like the comic book format that was chosen as the layout.

While uncommon, the red pants version can be picked up on secondary markets for $15.00 to $25.00 mint in the package. Unfortunately if you're wanting to track down the variant green pants version you're going to need two things - A lot of patience, and a lot of money. Very rarely do we see them come up for sale, and when they do they average about $120.00 mint on card. If you buy the figure loose, make sure to inquire if the LED feature is in working condition or not. Otherwise you may end up paying a premium for a non working feature.

Join us next time when we take a look at The Beatles!


Click "HERE" to go back to the home page. For more posts related to this one, please click the labels below.
Posted by The Toy Box on July 16, 2015
Email ThisBlogThis!Share to TwitterShare to FacebookShare to Pinterest
Labels: 1990's, Comic Book Toys, Dark Horse Comics, Flaming Carrot, Flaming Carrot Comics