It's as if the entire month of April is our own personal April Fool's month, and every week it's just another joke.  It seems like every time we turn around we're finding something weirder and weirder to top the last one.

Today's find are dolls based on Fran Drescher's character in the CBS show, The Nanny.  We're not sure what execs at Street Players were thinking when they unleashed these things on the public, suffice to say that nobody clearly stood up and asked the question, "Is this really such a good idea?" 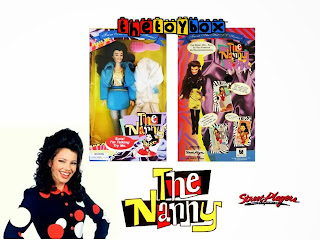 Three dolls were produced, all of the same design, but featured different tacky outfits and accessories.  If that was the worst offender from this series, it'd be tolerable.  Unfortunately it gets worse.  Each doll came with a push button talking action to make statements such as, Honey, I know what I am, but trust me, you're  a doll too."  Fortunately it didn't also come with the obnoxious Drescher laugh.

Sadly it doesn't give the impression that Street Players was necessarily trying to capitalize on Drescher herself, or even the show, The Nanny.  Rather they were trying to sell the doll based on how annoying the actress's voice was (is).  Personally Ms. Fran should be offended if that's the case. 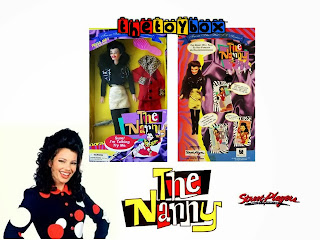 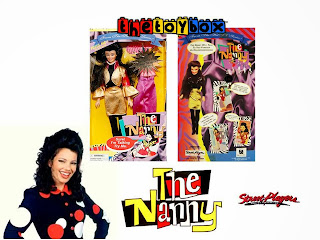 We're not sure how many dolls sold, but there are a ton on eBay these days, so sadly someone was buying it.  We dare say, or rather, hope that most purchases were made as a gag gift.

Join us next time when we take a look at something hopefully better, but at the rate we're going, it's anyone's guess at this point.

Click "HERE" to go back to the home page. For more posts related to this one, please click the labels below.
Posted by The Toy Box on April 17, 2014
Email ThisBlogThis!Share to TwitterShare to FacebookShare to Pinterest
Labels: 1990's, Fran Drescher, Nany Fines, Street Players, The Nanny