For a story based on the premise that, "There can be only one," there sure were a lot of movies and television series based on Highlander.  To be honest, with everything that's come to be the Highlander Universe, the only thing we personally think is worth watching is the original movie, and nothing more.  Everything beyond that seemed to just get progressively worse and worse - Much like the sequels to the original The Crow film.

The series ran for forty episodes which encompassed two seasons.  Despite being a cartoon aired during the day, it was considered by many to be for a more mature audience due to the mass amounts of violence, and occasional beheadings of minor characters.

In 1996, Prime Time supported the animated series with a small series of toys.  It would be the only line of action figures the company would produce to date. 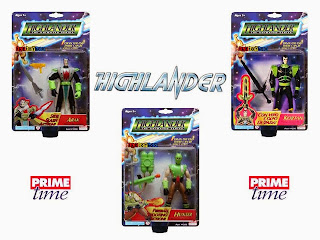 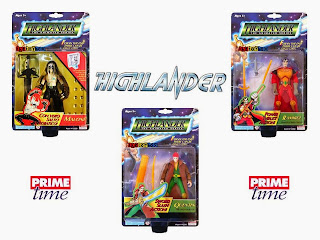 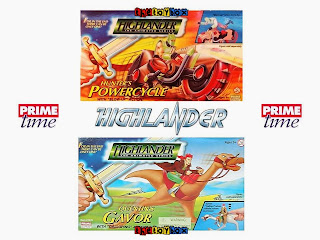 These days, Prime Time mainly focuses their production on toy guns and water based toys.

Join us next time when we take a look at Heroes of Cybertron!

Click "HERE" to go back to the home page. For more posts related to this one, please click the labels below.
Posted by The Toy Box on April 03, 2014
Email ThisBlogThis!Share to TwitterShare to FacebookShare to Pinterest
Labels: 1990's, Highlander, Highlander the Animated Series, Prime Time