Truth be told, MC Hammer was originally scheduled to be a bonus section of our April Fool's Day post which featured the 1991 THQ Vanilla Ice dolls, but unfortunately was never added.  So, since it's a (2) legit (2 quit) toy, there's no sense in not posting it now.

Hammer, much like Vanilla Ice gets a bum rap these days, but truth be told, Mattel wouldn't have made the dolls if there wasn't a market for it back in 1991.  After all, much like Vanilla Ice dolls, it's not like they didn't sell to many happy fans.  Unfortunately, said fans just moved on to other things a lot faster than many people such as MC Hammer, Mattel, and all those backing him would have liked.

Two versions of MC Hammer were released; MC Hammer Concert Doll with Cassette (purple outfit), and MC Hammer Concert Doll with Stereo (gold outfit).  The cassette featured two single, "Can't Touch This," and "Dancin' Machine," as well as eight personal messages from Hammer himself.  The stereo was just an accessory for the second doll, but the box boasts that it, "Makes real rap sounds!" 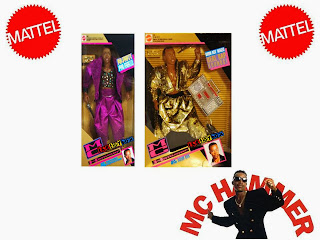 Three sets of additional clothing were produced for the doll, all of which were released under the banner, "MC Hammer Original Fashions."  None were given specific names, but are iconic from such music videos such as, "You Can't Touch This." 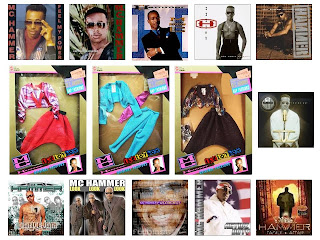 Despite continuing to release albums, MC Hammer appears to have seen his prime in the music world.  A perfect example of how he's been shunned by the music community and fans would be the surprise appearance he made at the premiere of "The Cable Show" in 2013 where after performing 2 Legit 2 Quit received all but two seconds of unenthusiastic applause.

Join us next time when we keep the music alive with our look at Metallica!

Click "HERE" to go back to the home page. For more posts related to this one, please click the labels below.
Posted by The Toy Box on April 10, 2014
Email ThisBlogThis!Share to TwitterShare to FacebookShare to Pinterest
Labels: 1990's, Hammer Time, Mattel, MC Hammer