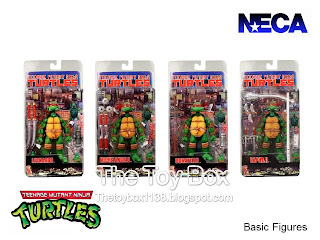 When Teenage Mutant Ninja Turtles launched in comic book form in May of 1984, the world could never have perceived the huge following such a small independent company (Mirage Studios) would build with only one title. Its initial 3,000 copies sold out almost overnight, and since then has seen numerous reprints of several issues of the 62 individual (comic) books.

Since its original conception, the series has been developed for television, film, a live rock and roll concert sponsored by Pizza Hut, and of course toys. Playmates produced the very first action figures based on the four brothers, which was in turn based on the concepts as seen in the animated series. We've touched on a few of those series in the past, but today we're focusing on the Neca series. 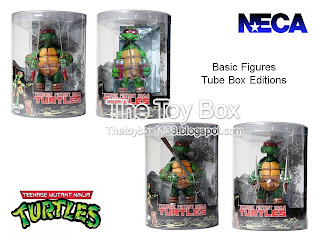 Right off the bat you can see the conceptual disgn difference between Playmates and NECA's toys. As we said, Playmates was based more on the animated show, while NECA's were based off the original designs for the comic book. This was both a pro and con for the series.

It was a pro because purist fans of the Turtles were able to get their hands on what they considered to be the "original" characters. For example, throughout the comic series, the four brothers all wore red bandanas. There was no distinguishing between the characters by colored ones as seen in the cartoon. This in turn led to one of the biggest cons of the series. People who weren't aware of this, specifically in foreign markets were confused by all of the characters wearing red bandanas, and didn't recognize the toys - Or rather, the individual characters.

Okay, these four "color" versions of the figures may be bootlegs, but in terms of quality, they're some of the best bootlegs ever produced. NECA never produced any of the Turtles with their colored bandanas. It's unknown who produced these, but they have duped many a fan and second hand dealer that they were getting a rare set of variants. 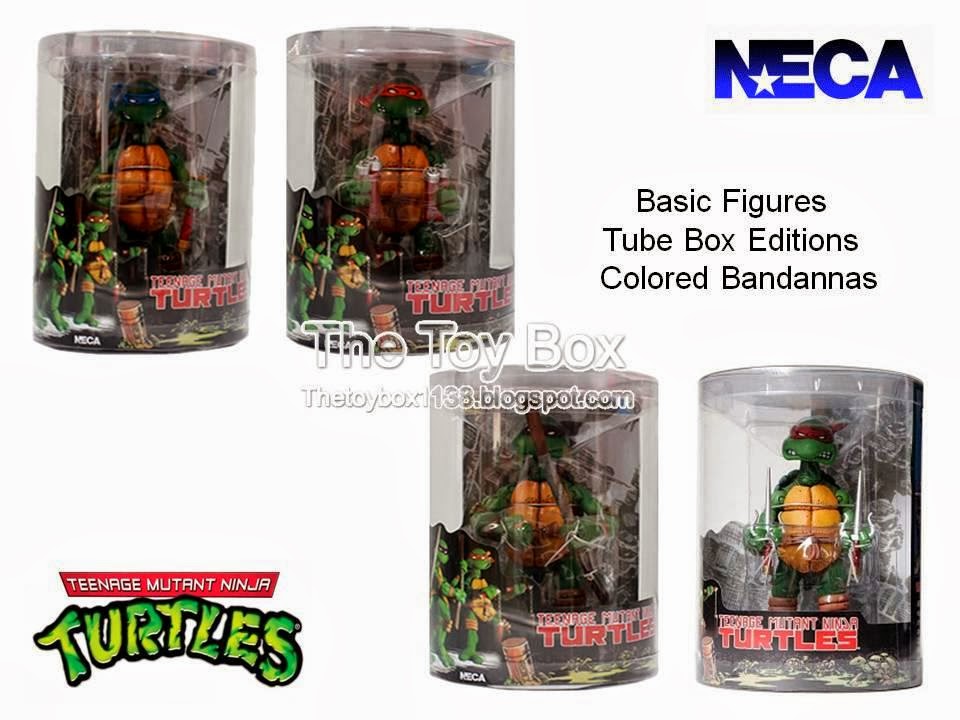 The toys contained an amazing amount of detail both to the figures and weapons/accessories. For the first series, NECA released all four Turtles both in a PVC bubble package, and in PVC tube packaging. Its uncertain why this drastic change was made between packaging midway through the series, but if we had to weigh in, we prefer the PVC bubble packaging to the tubes. 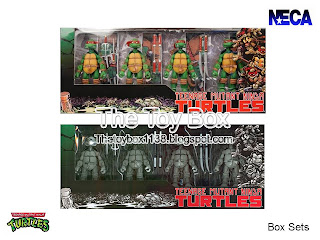 In addition to the individual packs, NECA released a four pack of the group. While the standard (full color) figures was more commonly found, it is rumored, but not confirmed that the black and white chase figure set (which was initially released at Comic Con - see below) was also made available via retail channels. The most notable difference would be that the retail version (again, if it exists) would not contain the San Diego Comic Con logo.

However, both sets were initially made available at specific conventions (again, see below). 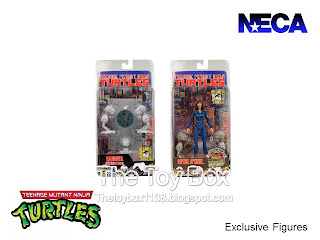 Much like the Turtles, the April O'Neil was confusing to collector's unfamiliar with the comic. In the initial story that April is introduced in, she wears a blue jump suit - Whereas in the cartoon series, the character was always seen in a yellow colored jumpsuit. For the purists, this was awesome - For the cartoon fans, again, confusing.

As we mentioned above, the four pack box sets were first made available at conventions. Both released in 2008, the full color turtles were sold at New York Comic Con, and the black and white set at San Diego Comic Con. The only difference in the packaging is the sticker adhered to the front. 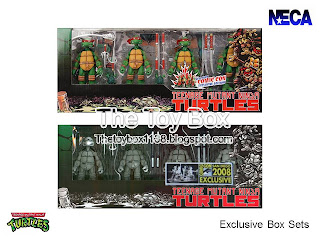 What's interesting about the New York Comic Con full color set is that it is actually harder to find one that isn't autographed as opposed to ones that are. During the convention, Peter Larid, co-creator of TMNT was on hand to sign autographs. As a result, the majority of buyers of the four packs had them signed. 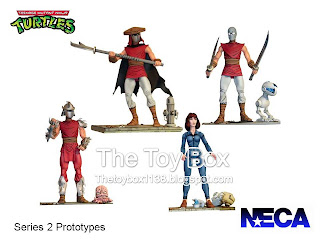 A second series was scheduled to be released, and even made it as far as the prototype phase. There are two major contributing factors as to why the series was never produced and released.

The first - Unfortunately the series was dealt a major blow when Playmates filed a claim against NECA that forbid them to sell the toys in retail stores due to their existing contract.

There were four figures set for release; Shredder, Foot Soldier, Shredder with Krang pack in, and April O'Neil. You'll notice that the prototype April O'Neil is actually the same as the San Diego Comic Con exclusive. However it was never intended for this particular version to be released. 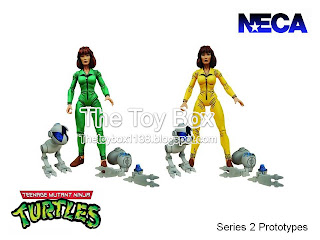 The second - As we mentioned above, foreign markets in particular were confused by what they considered to be a new look for the characters, and as a result were not recognizing the figures for whom or what they were. To see if there was a strong foreign market for the toys, NECA planned to release figures one at a time to see if sales would justify production. The first attempt would have included April O'Neil as seen above. The regular figure would have depicted her in the yellow jumpsuit as seen in the cartoon, in hopes that she would be more recognizable to fans overseas. A chase variant with her in a green jumpsuit would also be produced and sold at the same time.

However, due to the first reason above, I.E. Playmates forbidding the toys to be sold in retail stores, this concept was never tested, and the series was put on hold with no official word of cancellation yet.

For us, this series is a thousand times better than Playmates original toys. We fell in love with the Turtles from issue one back in 1984, and love the idea of having toys based on it. Not that the Playmates toys were terrible, we love them too, but NECA's versions hold a much larger piece of our nostalgic loving heart. Plus, they’re just so cool looking.

We really hope that Playmates and NECA can come to some form of resolution that these second series toys (and beyond) can see the light of day. Though with the release of new figures from Playmates based on the new animated series on Nickelodeon, we don't know how likely this is going to be.

Join us next time when we take a look at Last Action Hero!

Click "HERE" to go back to the home page. For more posts related to this one, please click the labels below.
Posted by The Toy Box on September 20, 2012
Email ThisBlogThis!Share to TwitterShare to FacebookShare to Pinterest
Labels: 2000's, Comic Book Toys, Kevin Eastman, Mirage Comics, NECA, Peter Larid, Teenage Mutant Ninja Turtles, TMNT