20,000 Leagues Under the Sea has been a fan favorite since Jules Verne published the book in 1870. Since then it has been reprinted, adapted to comic, and immortalized on both television and the big screen. 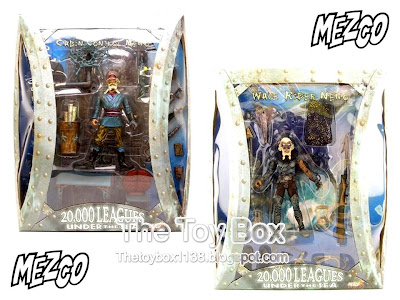 However, a classic book doesn't necessarily transfer into a hot toy line. Mezco made an odd move in 2001 when they produced two figures/playsets based on the title. Despite their fantastic sculpts and unique packaging, for obvious reasons, failed to impress toy collectors.

Cabin Control Nemo, and Wave Rider Nemo would be the only two figures produced. Each figure came packed with a mini playset which served as both a figure stand, and background display for the characters.

It was an interesting release from Mezco, and we can't quite figure out what their possible motivation could have been for producing the series, but for what it's worth, they're not bad figures.

Join us next time when we take a look at DC Direct's All-Star!

Posted by The Toy Box on September 13, 2012
Email ThisBlogThis!Share to TwitterShare to FacebookShare to Pinterest
Labels: 2000's, 20000 Leagues Under the Sea, Jules Verne, Mezco, Nemo