There's not much we can say about the show Futurama that we didn't say already in our prior post based on the Toynami brand figures.

Prior to Toynami's Futurama toy line a smaller series was released by Moore Action Collectibles in 2002. The line covered the basic of basic figures - Fry, Leela, and Bender. It also included a smaller version of the Planet Express ship, which was shrunken down to fit into the packaging size that the figures were in. It was obviously not designed to be interactive with the figures themselves. 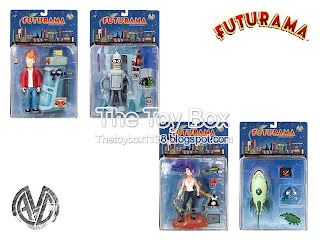 During the series, two exclusives were produced - Chef Bender (Previews Exclusive), and Leela in a swimsuit (Toyfare Exclusive). The Leela figure can be found in both a carded and boxed edition. 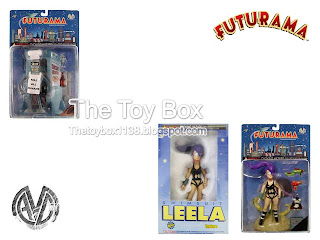 The Futurama line was discontinued shortly after the two exclusives were released. Moore Action Collectibles hasn't been heard from or seen since 2004 when the company released its final Buffy the Vampire Slayer toys. The companies lines of toys such as Beavis and Butthead, Kabuki, Fathom, and more were definitely unique, but unfortunately without a strong leading line, could not compete with today's fast paced action figure world.

Join us next time when we take a look at 20,000 Leagues Under the Seas!