"Na-Nu Na-Nu" and "Shazbot". These are just some of the silly words you'll hear in a typical episode of Mork and Mindy. The series starred Robin Williams as Mork, and Pam Dawber as Mindy McConnell, Mork's roommate, and eventual significant other.

The series itself is a spin-off of the series Happy Days, and spawned from an episode in which Mork from Ork arrives on Earth to take Richie back to his home planet for study. The episode turns out to be nothing more than a dream sequence, but audiences liked the character so much that a series was put into production.

Unlike the Happy Days episode which took place in the setting of the 1950's, Mork and Mindy was a current period series setting it in the late 1970's, early 1980's. Mork lands on Earth with the premise of ovserving humans. Mork is chosen for the mission by his superior Orson (voiced by Ralph James) simply to get him off the planet as humor is not permitted.

Mork and Mindy meet up when Mindy is stranded after having an argument with her boyfriend. She mistakes him for a priest, and is happy with his eagerness to listen to her. After going to her apartment, she finds that he is an alien, and promises to keep his secret.

At first Mork and Mindy were simply roommates, but as the series continued they formed a romantic relationship, eventually leading to their marriage in the fourth and final season.

In its first season the show was incredibly popular. However by the second season, ABC executives were eager to grab a younger audience, and began making changes. This was notable from the start with the disco based re-recording of the theme song. The second series also saw the addition and removal of key players.

With the start of the third season, ABC acknowledged its mistake of re-visioning the show after such a strong start, and returned some of key cast members from the first season. They even nodded at their error by naming the first hour long episode, "Putting the Ork Back in Mork". Unfortunately these changes failed to bring back prior viewers. Despite poor ratings the show was renewed for a fourth and final season where the two main characters marry. After 95 episodes, the series was cancelled. 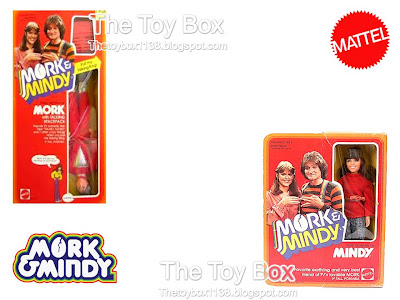 In 1980, Mattel swooped in for the license opportunity. They produced two dolls, Mork and Mindy (respectively), and no more. The dolls poorly resembled their actor counterparts, and found little success with young girls (and boys) of the era.

The figure of Mork came packaged in a large box, and depicted the character upside down to capitalize on his off the wall nature. The Mindy figure came in a smaller box typically designed to match dolls released during this time - I.E. rectangle box with equally sized tab to the left. Both packages were fairly bland even with their bright red color. 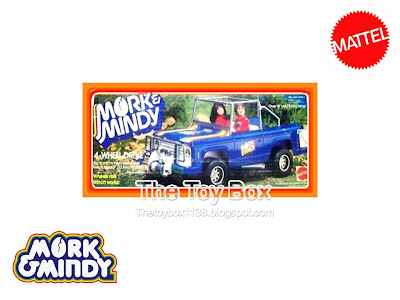 The most difficult piece to come by these days is Mindy's jeep - Respectfully known as 4-Wheel Drive on the package. Oddly enough, when found, the majority of them are either still sealed in the box, or at the very least come with it.

With rapidly declining sales, most likely due to declining interest in the series from the season two changes, Mattel pulled the plug on their dolls, never to return to them. To this day no other toy line pertaining to the actual characters of Mork and Mindy has ever been produced. This is possibly due to the cost it would incur for licensing Robin William's likeness. He's not exactly a washed up 80's television star these days.

Join us next time when we take a look at Monty Python and the Holy Grail!