Mainstay characters such as Batman, Superman, The Joker, Lex Luthor, and more have always been the bread and butter of DC Comics, making them a household name that has run strong as early as the 1940's. Despite the various twists and turns the comic world takes, or how many new series are produced, DC always circles back to the characters who have been icons for generations. 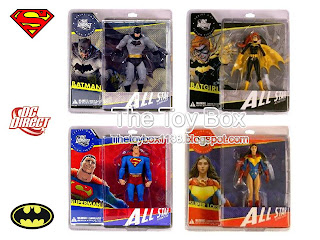 This is the same in the toy world. No matter how many different toys are produced, it's pretty much a guarantee that at any point in time you can walk down a toy isle and find your favorite superheroes on a peg in some form or fashion. Be it large series based lines, or smaller, more compact lines.

In 2009, DC Direct released a small line of wonderful figures - DC All-Stars. All-Star was an imprint of ongoing comic book titles published by DC Comics that ran from 2005 to 2008 featuring Batman and Superman, which the toy line was based on. The idea of the imprint was to bring the most acclaimed writers and artists together with top tier DC characters to present their interpretation for a modern audience that have not read these DC characters' comics previously, or had not seen them lately.

The DC Direct toy line included Batman, Batgirl, Superman, and the less heard of Super Lois from the Anttimater Universe. Each figure came packed in a sealed PVC packaging with a unique cardboard back packed in. The colors of the cardboard were designed to match the uniform of the figure's uniform inside. 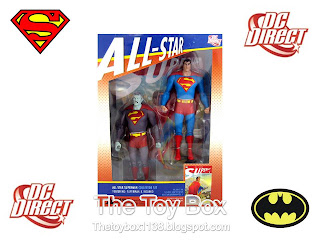 Along with the four individual figures, an All-Star Superman Collector Set which included a slightly resculpted Superman and Bizarro figures inside was released. This particular item came in a window box, and once again utilized the color scheme of Superman's costume, much like the individual figure. Packed behind the figures was a limited edition 160 page reprint of All-Star Superman Volume 1 written by Grant Morrison with art by Frank Quietly.

The line was mildly successful, and since it didn't have the flaw that most comic book based lines had - excessive repaints, it was well received by comic purists. Unfortunately DC Direct failed to capitalize fully on the line by stopping at the handful of figures released in 2009.

Join us next time when we take a look at Neca's Teenage Mutant Ninja Turtles!

Click "HERE" to go back to the home page. For more posts related to this one, please click the labels below.
Posted by The Toy Box on September 17, 2012
Email ThisBlogThis!Share to TwitterShare to FacebookShare to Pinterest
Labels: 2000's, Batgirl, Batman, Comic Book Toys, DC Comics, DC Direct, Super Lois, Superman