Our Gang, more commonly known as The Little Rascals to today's generation was a series of shorts created by Hal Roach. Two hundred twenty shorts (as well as one full length movie) were produced since the series was introduced in the 1920's, making it one of the largest serial series ever made. Characters such as Alfalfa, Spanky, Darla, Froggy, and Buckwheat quickly became household names, and to this day are iconic characters.

Due to the ever growing popularity of the show, as well as the ever growing children used for it, it became necessary to replace the children every few years with new actors. Thus when shows are run in syndication today, it can cause some confusion for viewers who aren't necessarily educated on the series background.

When the serial first began in the 20's, the films were silent. This allowed Roach to focus on letting the children act like children, as opposed to sticking to scripts, which the majority of the children couldn't read. However, when the serial was converted to "talkies", the common term for movies that made the leap from silent to sound, it forced the children actors to quickly develop their reading skills if they wanted to be a part of the show.

The series was way ahead of its time by way of casting. In an era where white males were considered dominant, it was impressive and commendable that the series cast both black children, and also females in equal lead character roles - Something that wouldn't be notable in a series until almost five decades later in Gene Rodenberry's original Star Trek series.

After years of gradual cast changes, the troupe standardized in 1936 with the move to one-reel shorts, lasting just ten minutes in length. Most casual fans of Our Gang are particularly familiar with the 1936–1939 incarnation of the cast: Spanky, Alfalfa, Darla, Buckwheat, and Porky, with recurring characters such as neighborhood bullies Butch and Woim and bookworm Waldo.

These are also the characters that Mego's 1975 line were based on. With the show in full syndication (now under the title "The Little Rascals"), Mego took the still rising popularity of the series as an opportunity to produce eight inch "dolls". Though interesting to note is that the toys produced were not under the banner "The Little Rascals", but rather the original series title, "Our Gang".

Alfalfa, Buckwheat, Spanky, Mickey, Porky, and Darla were all produced for the series. Each character came packed on a cardboard backer designed to look like the side of the gang's clubhouse wall, and contained fantastic fully painted representations of the six figures available. Each doll was dressed in a traditional garb as seen in the serials. 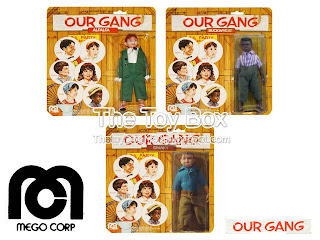 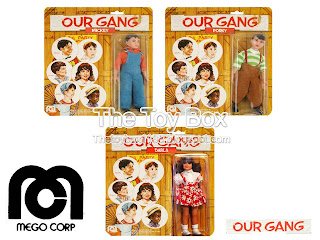 Mego also produced a Clubhouse playset which included a scooter, and two vehicles - The Orange Crate Cart, and Rowboat.

Unlike most traditional Mego playsets which were cardboard "set pieces", the Clubhouse playset was a fairly large plastic box that opened from the front on a hinge. It also included a strap at the top for transporting it.

Each piece (the playset and vehicles) were designed to look like they had been put together with planks, and complimented each other perfectly. 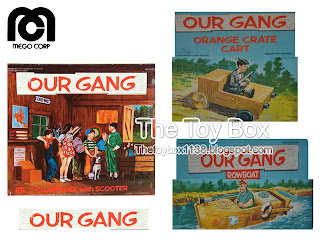 Join us on September 30, 2012 for a special announcement!

Click "HERE" to go back to the home page. For more posts related to this one, please click the labels below.
Posted by The Toy Box on September 27, 2012
Email ThisBlogThis!Share to TwitterShare to FacebookShare to Pinterest
Labels: 1970's, Alfalfa, Buckwheat, Darla, Froggy, Hal Roach, Jackie Cooper, Mego, Mickey, Our Gang, Porky, Spanky, The Little Rascals