Conceived in 1975 in between the third and fourth series of the television show, Monty Python and the Holy Grail would become the troupe’s first official movie. It would also launch the group from BBC stars to international cult film status. When the film launched, fans new and old were quick to adopt catch phrases and personas of the characters. It would also open new opportunities up to the cast which included; Graham Chapman, John Cleese, Terry Gilliam, Eric Idle, Terry Jones, and Michael Palin.

The film follows King Arthur as he searches for the Holy Grail, picking up a quirky band of Knights on the way. From angry French guards to deadly rabbits, and a Black Knight that refuses to yeild even in defeat, pretty much every minute of the film is filled with some form of quirky, or down right silly humor. Its a classic masterpiece. 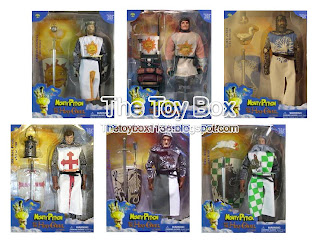 Despite the success of the troupe, and their continued hits both on television and film, it wouldn't be until almost three decades later that they would be bestowed the honor of having an action figure line. Diamond Select produced six figures based on the film The Holy Grail in 2003, and while it included the majority of the main cast, left room to grow - which unfortunately never happened.

Each figure came in a window view box, and despite the incredible detail to the characters clothing and accessories was unfortunately lacking in detail when capturing the look of the actors.

While the line found a niche in the action figure world, it didn't sell as good as anticipated, and was cancelled. Had this line been released twenty years ago, or even right after the film was produced, sales would have probably been through the roof. Sadly by the time someone finally figured out that there was a market for these figures that market had already come and gone.

But, missed market or not, these are some great figures, and well worth adding to your collection if you’re a fan of Monty Python, or simply great figures in general.

Join us next time when we take a look at Moore Action Collectibles - Futurama!

Click "HERE" to go back to the home page. For more posts related to this one, please click the labels below.
Posted by The Toy Box on September 06, 2012
Email ThisBlogThis!Share to TwitterShare to FacebookShare to Pinterest
Labels: 2000's, and Michael Palin, Diamond Select, Eric Idle, Graham Chapman, John Cleese, Monty Python, Monty Python and the Holy Grail, Terry Gilliam, Terry Jones