The Wizard Of Oz (WB Toys)

Written in 1900 by L. Frank Baum and W.W. Denslow, The Wizard of Oz wouldn't see worldwide acclaim until its best known adaption in 1939 when Judy Garland depicted Dorothy on the big screen in MGM's film. While it had been adapted several times prior to that in film form, the 1939 version offered a truly visionary look at the story, blending color and black and white film, with a fantastic cast and soundtrack featuring original music by Harold Arlen.

In the film, Dorothy is caught in a twister that lifts her home, or rather her Aunt and Uncle's home into the air, depositing it in the magical Land of Oz. The story focuses on Dorothy, accompanied by her dog Toto, trying to find their way to the Emerald City, all in hopes of finding a way home. On the way they meet some fantastic friends/characters such as Scarecrow, Tin Man and Cowardly Lion.

They also meet the villainous Wicked Witch of the West who is bent on destroying Dorothy and claiming back her sister's Ruby Slippers, which would make her the most powerful witch in the land. The shoes came to be in Dorothy's possession when Glinda the Good Witch magically removed them from the feet of the now deceased Wicked Witch of the East, transferring them to Dorothy's. The Wicked Witch of the East was of course killed when the house Dorothy was in landed on her. 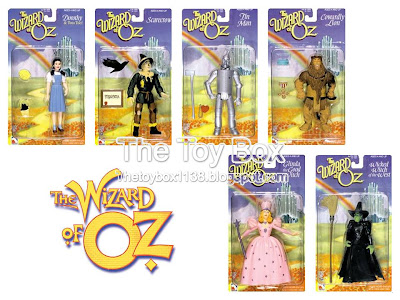 Fast forward to over 50 years after the film was released to 1998. WB Toys produced these six wonderful plastic adaptations from the film. Featuring all of the main characters; Dorothy, The Scarecrow, The Tin Man, The Cowardly Lion, Glinda the Good Witch, and the Wicked Witch of the West. They were a true Oz fan's dream come true.

The figures themselves had little to no articulation, but came with some wonderful accessories as seen in the film. From the Cowardly Lion's medal for Courage, to the Wicked Witch's broom, each figure was accompanied quiet well by an accessory.

The bright packaging depicted the Yellow Brick Road leading up to the Emerald City with each figure sealed in a plastic oversized bubble. The logo and corresponding figure's name were depicted at the top of each package.

The figures are a little difficult to track down in mint on card condition. Prices vary from five to thirty dollars per figure, but very few are ever sold on secondary markets as most collectors simply aren't looking for them. Still, if you're a fan of the film (or any other media version), these are some pretty fine looking toys.

Join us next time for our look at Batman - Hush!

Posted by OK Records 1138 on June 07, 2012
Email ThisBlogThis!Share to TwitterShare to FacebookShare to Pinterest
Labels: 1990's, MGM, The Wizard of Oz, WB Toys