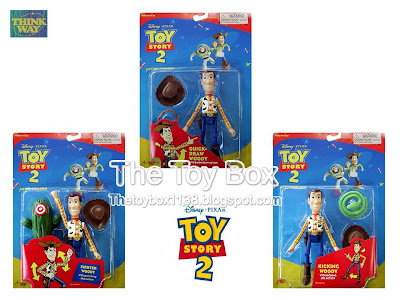 After having huge success with Toy Story figures in 1996, Thinkway Toys once again jumped at the opportunity to create figures based on the 1999 sequel, Toy Story 2. Unfortunately for them, no sooner than they began production in 1998, they lost the rights to produce anything affiliated with the Toy Story license, and the series came and went after only five figures. 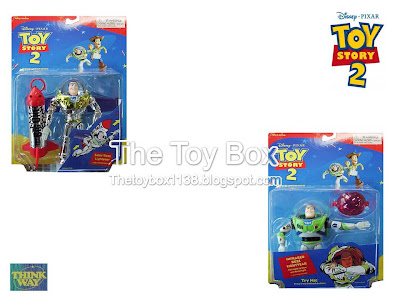 What's disappointing and questionable is that the five figures produced under the Toy Story 2 banner were all repacked figures from the first series of toys Thinkway had produced - A total disappointment to fans that were eager to see new toys. What makes it questionable is it makes you wonder if Thinkway knew they were going to lose the rights to the toys, so they quickly pushed the repackaged ones on the market in some kind of attempt to give Disney and Pixar the middle finger. This would also make sense as the figures came out almost an entire year before the new film even hit theaters. Unfortunately, we the general public will never know the answer to those questions, so we'll just have to continue to speculate.

In 1999 Mattel purchased the rights to produce the toys, and launched their own line of Toy Story 2 figures. Thinkway's toys quickly disappeared into clearance isle oblivion never to be heard from again.

Today Toy Story toys have seen three different companies take a crack at them. Though each one seems to be no more than slight modifications to the prior ones, with the only major difference being the over inflated price tags. If life was a comment page, Thinkway could at least leave a post which read simply, "First!"

Join us next time for our look at The Wizard of Oz!