Hush is a series that took place in the monthly Batman comics between 2002 and 2003 (Issues 608-616). The series was written by Jeph Loeb, and penciled by Jim Lee. The series was a major success among Batman fans, and since its release has been collected and reproduced numerous times in trade paperback format.

The series intertwines between the various villains in the world of Gotham City, and even takes readers into Metropolis for a cross over with Superman. Eventually the series climaxes in the true plot where it is revealed that The Riddler, now cured of his cancer, knows the true identity of Batman.

The story has been praised for having a lot of unforgettable moments in Batman history, and at the same time been criticized heavily for a lot of the simplistic plot points that leave Batman looking inept and unable to handle a basic situation - Such as his rope being cut in the very first pages of the series which results in him falling to the ground, and cracking his skull open. Still, the series has sold several individual books, and collected graphic novels, so the story clearly was highly received by fans.

While a sequel was planned, it never came to be. Several of the plot points were followed out and/or continued in later books by various comic alumni, but an offical sequel was never released.

In 2004, DC Direct launched a line of figures based on the series. Sixteen figures, and one (repacked) exclusive were released over the three waves of toys produced between 2004 (series 1 and 2) and 2005 (series 3).

The exclusive figure, Jason Todd, which was released through ToyFare magazine was nothing more than a figure from the upcoming second series. While this version contained the ToyFare logo at the top of the package, there are no differences between the exclusive and retail versions of the toy. 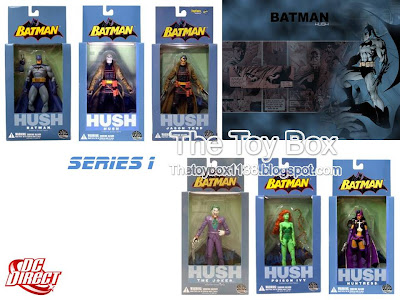 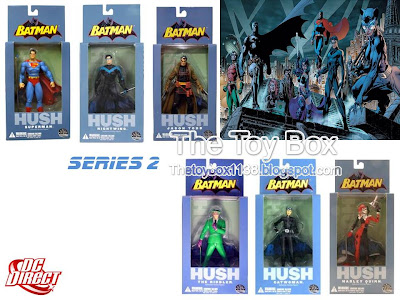 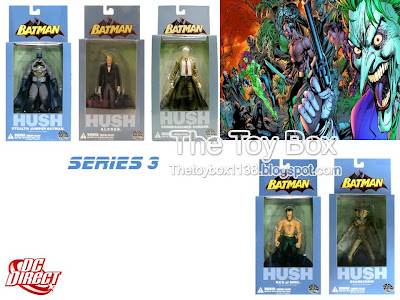 The series has some of the best scuplts available for Batman figures and villains, and therefore is highly sought after by collectors of both the comic and toy variety. It's also one of the only places you'll find a figure based on Alfred the Butler. If there are any complaints, it was that the series ended too soon. The potential for more key villains was there, such as The Penguin, Two-Face, Clayface, Killer Croc and even heroes such as Batgirl and Robin. Even if they didn't necessarily appear in the actual "Hush" story, the figures would have been great to see produced.

The majority of the figures can be purchased for between ten and twenty dollars, while some of the villains can fetch as much as forty to fifty dollars each - Such as Catwoman and Poison Ivy.

This is a great series of toys based on Batman, and ones that surely shouldn't be passed up.

Join us next time for our look at V!