Batman: Mask of the Phantasm (Kenner)

In the prime of Batman the Animated Series two things happened. The first was that an animated film was produced for the big screen. The second was that a small toys based on said film were produced.

The film, which opened on Christmas Day in 1993 delves deeper into the established animated series world bringing along with it a more in depth look at Batman's origin, Bruce Wayne's love life, and a future villain of the caped crusader. The story revolves around a new mysterious figure, The Phantasm who has arrived in Gotham and is seeking out targeted criminals to eliminate them. As the story unfolds, so to does the mystery, and eventual revealing of the identity behind the Mask of the Phantasm.

The animation is superb, the story exciting, and the voice acting, coupled with the sound effects and soundtrack, on par with any major motion picture. To say this movie is a must see is an understatement. 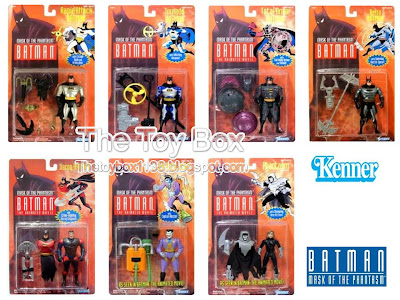 Technically a sub-series of the Animated Series line, the Mask of the Phantasm toy line did little to excite fans. With all the characters introduced in the film at their disposal, it is uncertain why Kenner decided to focus instead on yet another line of toys that was essentially nothing more than repainted Batman figures.

The only two "gems" to come from the series were the Joker and Phantasm figures, which at the time quickly skyrocketed in price on the secondary market. These prices have since subsided considerably, and in most cases you can get them for cheaper than their original retail price.

While it didn't see the success on the secondary market as the prior two mentioned figures, Retro Batman was also quiet popular among collectors who were eager to get a "regular looking" Batman figure, which was scarcely available during this time period due to the oversaturation of the market with repaints of the character.

There were no vehicles, playsets, or accessories produced for the line.

As we mentioned above, it is a shame that Kenner never capitalized on this particular series of toys as it could have. There were so many characters in the film that would have translated into the figure line - main characters such as Alfred, Commissioner Gordon, and Detective Bullock. None of these three main characters ever saw a figure in the animated series line. Then there were the second stream characters such as Arthur Reeves, Salvatore Valestra, Chuckie Sol, Buzz Bronski and more who could have been incorporated easily into the line.

There is nothing sadder to toy collectors than when they see a line that had all the potential in the world fizzle out due to poor marketing and support from the developers. What a missed opportunity for Kenner and Batman fans.

Join us next time when we take a look at Guitar Hero!

Click "HERE" to go back to the home page. For more posts related to this one, please click the labels below.
Posted by OK Records 1138 on June 28, 2012
Email ThisBlogThis!Share to TwitterShare to FacebookShare to Pinterest
Labels: 1990's, Batman, Batman the Animated Series, Comic Book Toys, DC Comics, Kenner, Mask of the Phantasm