In 1983 V was released as a two part mini series for prime time television. The series mixed a Gestapo like fascism story swirled together with a sci-fi twist. It was a match made in heaven, and quickly led to a second mini series, V: The Final Battle which brought the story to a (some what) conclusion.

In the series (or rather, the first mini series), the planet Earth is visited by a race of aliens claiming to be there on a mission of peace. They are looking to the human race for help and study, and in return offer to share with the entire planet the secrets they have unlocked about the universe, including extensive space travel. As the story unfolds, we find that the aliens who look human are actually lizards in disguise. Worse, they're goal is to suck the Earth dry of its water source, and harvest the human race as food.

Upon finding this horrible plan out, Mike Donavan (Marc Singer), joins a small resistance group determined to stop the Visitors from destroying everyone they know. With the help of the struggling resistance group, lead by Juliet Parrish (Faye Grant), and a select few Visitors who sympathize with the humans, they conduct mini strikes against the alien race, lead by the evil Diana (Jane Badler), pushing them back from the front lines of their cities.

While the story focuses itself around these characters, it is established in the beginning that the Visitors have placed "Mother Ships" in central locations around the entire world, and fighting takes place with various resistance groups against the aliens. These stories are further explored in the highly sought after paperback series which spans over several novels.

Though the second mini series (V: The Final Battle) brings the show to a satisfactory conclusion as the humans appear to finally push the Visitors from the planet, a TV show was put into production which followed it up. The series saw terrible ratings even at the height of "V" popularity, and is considered unnecessary by many fans who found the story to be bland and counter conducive to the alien's original plan.

In the series, the Visitors return once again to Earth, despite the humans finding a red powder which kills them on contact, and once again start taking humans. Though rather than taking them as a food source, they now have various camps in place to hold them as prisoners. It's the complete opposite goal that they once had in place. Apparently now the Visitors don't need food and water, they just want prisoners, and furthermore, what happened to the red dust that kills them on contact? Like we said, the series was unnecessary. It really did nothing more than ruin a once good thing. 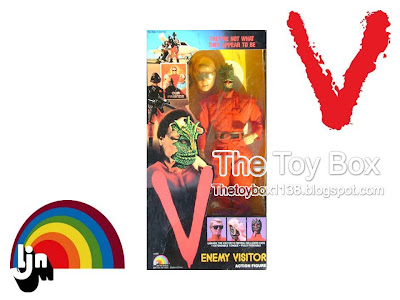 Between 1984 and 1985, LJN began production on a toy line. However, with the TV series failing to win over fans as the two original mini series had, and being cancelled as a result, production on the toy line quickly ceased.

Prior to its cancellation, LJN managed to release a twelve inch Enemy Visitor doll. Though initial sales in the 80's were poor at best, the doll stands as a cherished item to fans of the series.

With its colorful packaging, and pretty spot on sculpting, the doll is actually one nicely done piece of plastic - Especially considering the company behind it.

But, had the series continued on, what might have been? Well, to get that answer, one need only flip through the pages of the 1985 LJN catalog. There you'll find a four page spread showing what plans were laid out for the line... 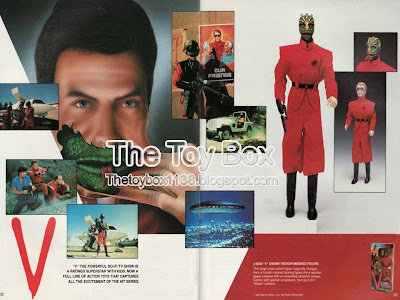 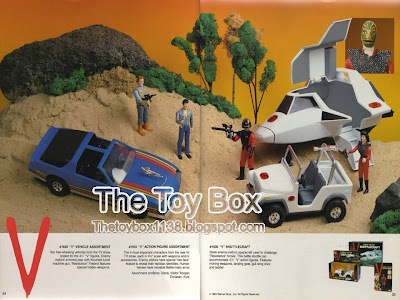 ...While pages 34 and 35 held an impressive tome of 3 3/4 inch figures and vehicles. If you look towards the bottom right hand side of page 35, you'll also see some of the items in their packages.

We can't help but feel like this was a set of toys that many collectors truly missed out on. Not only would it have sold impressively during the shows prime, but today we can imagine many collectors would be eager to add the pieces to their collections.
If only some toy company out there would revisit this series...

Join us next time as we take a look at Voltron.