We're incredibly amazed that Robocop became the household name it became among children. Let's be honest here. The movie is one of the most violent pieces of cinematic action film out there, especially for its time (1987). The sheer brutality in the scene where Murphy is murdered is stomach churning enough for the casual viewer to shut it off, and is made only worse in the director's cut.

Don't get us wrong though, in terms of sci-fi characters, Robocop is one bad...(shut your mouth). Despite the violent nature of the movie itself, the Robocop concept was ported to a children’s animated show, and action figures (as they so often do) followed. The television series itself didn't last long (12 episodes).

As we mentioned, Robocop got his start in the first film in 1987. The premise focuses on Officer Alex Murphey who after chasing down some bad guys with his partner Anne Lewis is brutally murdered. His body is reanimated as a cyborg by mega-corporation Omni Consumer Products (OCP) who has recently entered into a contract with the city to run the police department due to the high crime rate in the city. Thus, Robocop is born.

Two sequels as well as a short lived live action TV show were produced. Though they have a strong following in their own right, they are not highly acclaimed by critics and casual viewers.

Marvel Productions produced the animated series of the show in 1988, and even though it kept a lot of mature themes to it, there were changes made to make it more kid friendly. A perfect example of this is the removal of bullets, and the inclusion of laser weapons. The series also followed a more sci-fi setting as opposed to the real world Detroit setting of the film. An odd inclusion was the red light on Robocop's visor which ocassionally panned back and forth.

Despite its short lived animated life, Kenner produced an impressive sixteen figures, and nine vehicles for the line. Each figure had its own unique packaging, and even though the figures didn't have the articulation of say your average G.I. Joe figures, the design and quality seemed on par with the look of the show (and to an extent, the movies). 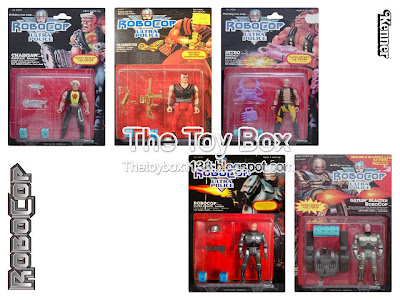 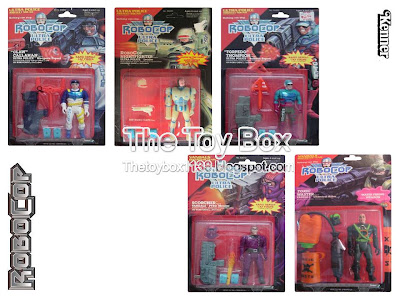 While some might find the figures to be lacking in quality, there is no denying that the vehicles, and the ED-209 "figure" were of a pretty decent quality possible for a child's toy line. Kenner really appeared to have put a lot of work and care into the items. 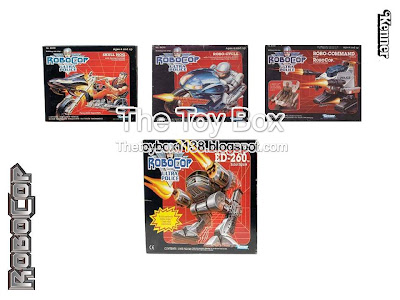 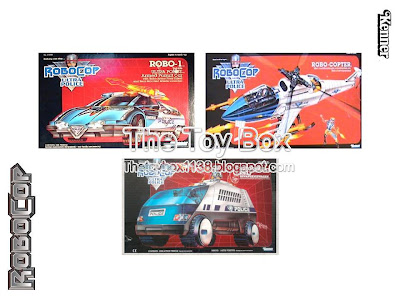 Robocop: Ultra Police may not be a toy line for everyone, but for those select few who do appreciate the toys for what they are, it's a pretty darn good collection.

Join us next time when we take a look at Teenage Mutant Ninja Turtles: Years 3 and 4.

Click "HERE" to go back to the home page. For more posts related to this one, please click the labels below.
Posted by The Toy Box on June 21, 2012
Email ThisBlogThis!Share to TwitterShare to FacebookShare to Pinterest
Labels: 1980's, Kenner, Robocop, Ultra Police