With the death of the original 12" Star Wars "dolls" occurring so quickly in the early 80's, it was a surprise to many collectors to see Kenner re-launch the series with the Power of the Force II line.

Unlike their predecessors, these new dolls showed a great amount of articulation, and were pretty impressive in detail from the figures to the clothing, and especially to the accessories.

The "official" series ran from 1996 to 2000, and while considered to be part of the Power of the Force line, it is actually known as the Collector Series - A series unto itself.

The first wave of four dolls release in 1996 include one of the most difficult dolls to find (back in the day), Obi-Wan Kenobi. This doll was packed one per case, and within weeks of its release was garnering $50.00 or more on the secondary market. Not bad considering the $19.99 suggested retail price.

The Luke Skywalker figure can be found in numerous variations. Some include the macrobinoculars on his belt, others in a bubble next to his head. Others are package variations such as gold foil logos, and dark blue backgrounds. 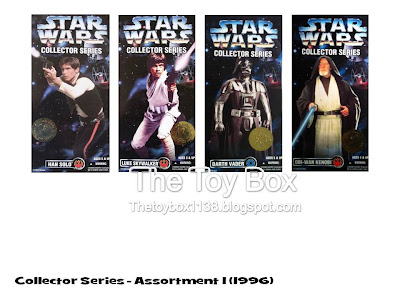 
The second assortment contains one of the two only "real" variant figures. The Tusken Raider was release with both a blaster rifle and a gaderffii stick. 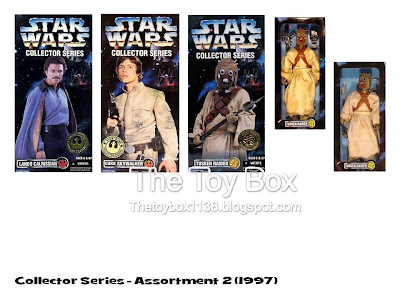 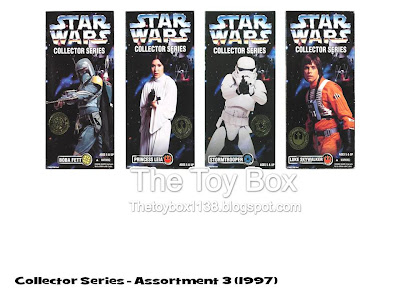 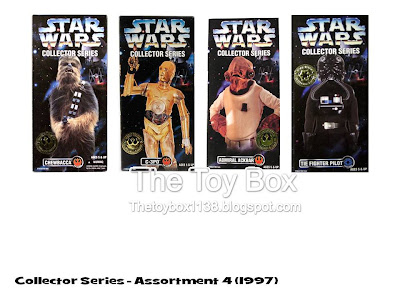 
One of the things that really pushed the series (and also in our opinion killed it) was the impressive amount of exclusives that were made available. It seemed like every retail store out there wanted a slice of the Star Wars pie.

From the three main contenders, Toys R' Us, Target, and Walmart - To the more obscure Service Merchandise, and FAO Schwarz - Everyone wanted an opportunity to sell exclusive Star Wars merchandise. 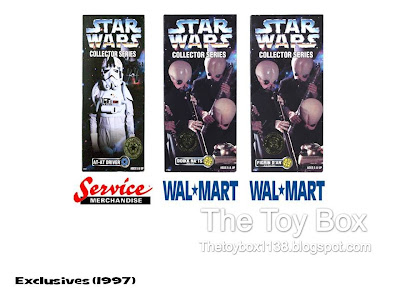 
Nothing screams "Buy Me" like the same figure released six times with a different instrument and name (we hope you caught that sarcasm). That's what Walmart went for with the release of these six dolls based on the Bith species.

A fun little fact about the six cantina band members is that for the longest time, people (Lucasfilm included) seemed to have forgotten (or simply just didn't know) that there were actually six band members. It wasn't until a letter to Star Wars Insider from a fan who claimed he thought there were six members in the scene of A New Hope, that this sixth member was finally remembered. 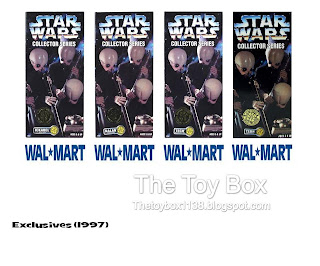 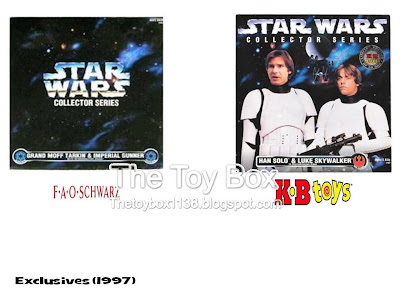 
Unlike all the other two pack exclusives, FAO Schwarz was the only company to really kick their packaging up a notch with flip up front "covers". All others were simple window boxes. This made the FAO Schwarz ones a little classy in our opinion. 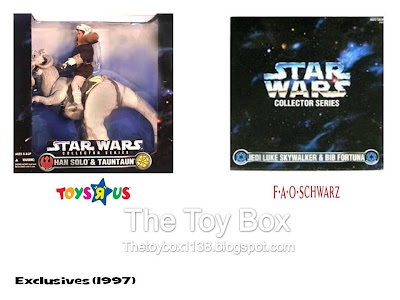 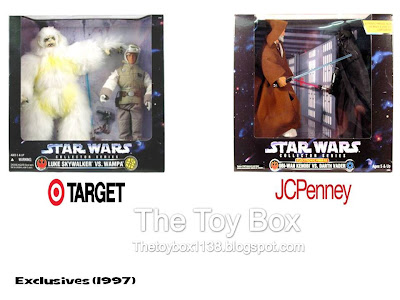 
JC Penny, a company long since out of the toy business (with the exception of their holiday catalogs) even got back into the Star Wars toy game with their 12 inch Greedo doll, and two pack Obi-Wan and Darth Vader. 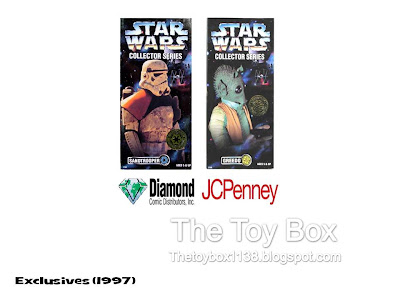 
By 1998 the line had found a fairly stable foothold in the toy isle, and several more dolls were released. To cut down on costs, the packaging was redesigned to resemble those (the majority) of the two pack exclusives. By that, we mean window boxes with no flip covers.

Some dolls can be found with a Kenner logo on the front of the package, while others have it on the back.

Oddly enough, a good amount of figures which were released the prior year as exclusives were re-released (with paint jobs) under the regular line. This in turn really killed the value of the exclusives on the secondary market. 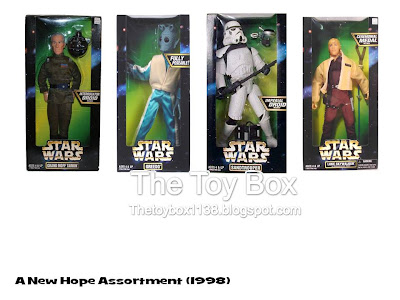 
The second "real" variant figure from the line is the Snowtrooper which can be found with both a white and blue chest plate. 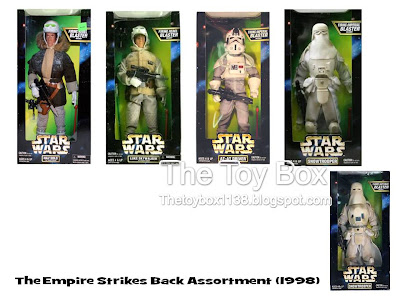 
When people saw the first edition Chewbacca from the 1997 assortment 4, the majority of them cringed. To help ease the suffering of these people, Kenner released a second Chewie doll. What someone in quality control seemed to miss was that this new doll wasn't any better. 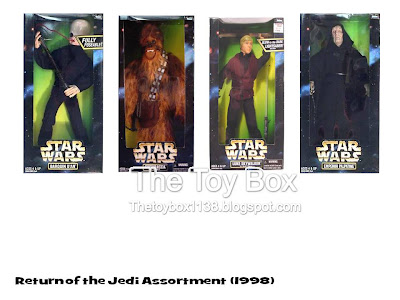 
Not all the characters stand at approximately the same height in the Star Wars universe. Thus the 6 inch line was created to compliment the line, and give these characters their chance to step into the spotlight.

In our opinion, these are probably the best "dolls" to come out of this line.

Out of the six released, three were exclusive to Walmart. 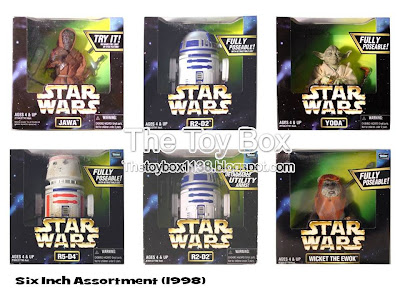 
By this time, Star Wars books had become a major staple in the expanded universe of Star Wars. This lead to the combining of both toy and literature in the Masterpiece Editions.

Each 12 inch doll was packed with a book which gave an in depth history of the character, and/or faction they were involved with. The books themselves were not a bad read.

Aurra Sing, who made a brief appearance in The Phantom Menace during the podrace was the newest character to capture the minds of fans. So it was only fitting that the character received a back story in the Masterpeice collection. She was the Boba Fett of the Prequels. 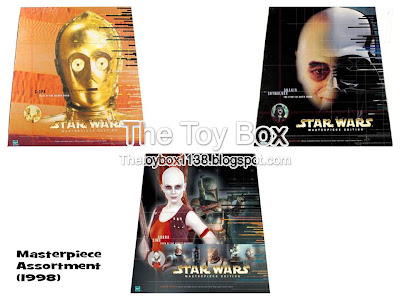 
Kenner tried their hand at two electronic talking dolls which while they found success with collector's who had endless mountains of cash at their disposal failed to impress the majority of toy buyers. 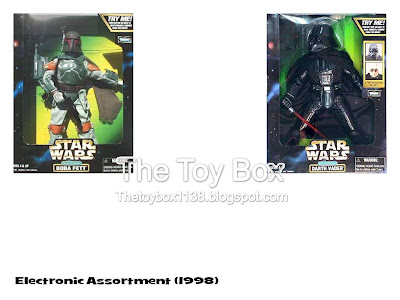 
Exclusives remained a large part of the series throughout 1998. Several stores returned with a second batch of dolls, though the majority of them were simply repacks. 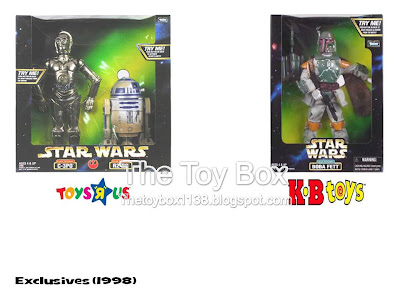 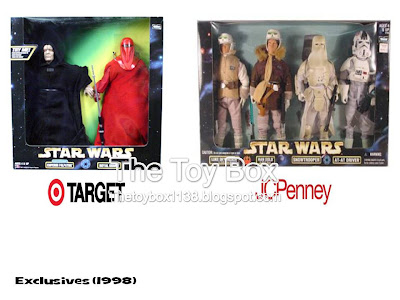 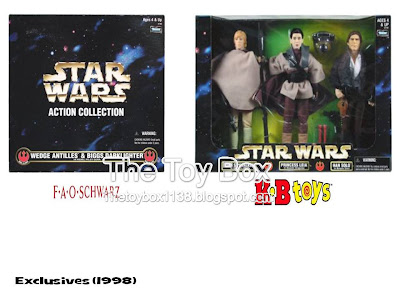 
The FAO Schwarz Princess Leia and R2-D2 two pack was the first doll released under the Princess Leia Collection. While there would only be one more doll in this particular sub series, the line would be carried over to The Phantom Menace line for Queen Amidala. 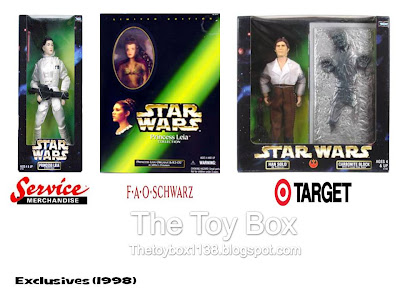 
By 1999 Kenner had sold to Hasbro, and the packaging was redesigned to closer resemble the new 3 3/4 inch figures. While this would help establish the two lines as one collection, it wasn't enough to boost sales.

1999 was the last year that single pack dolls were official released in conjunction with the Power of the Force line. 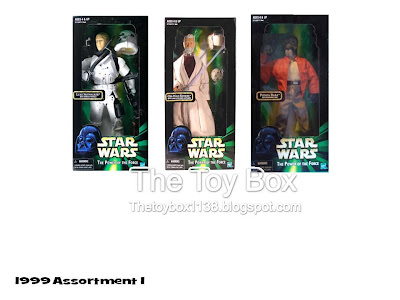 
Just when you thought Chewbacca dolls couldn't get any worse, Hasbro released this all plastic monster.

They also helped kill the collectability of the FAO Schwarz exclusive Princess Leia by releasing a single pack retail version. 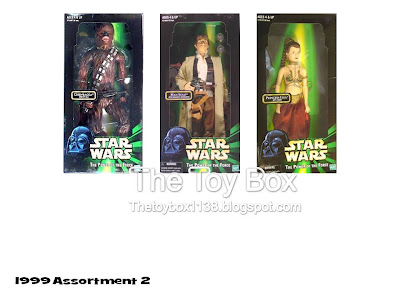 
As mentioned above, there was only one more doll released under the giese of the Princess Leia Collection. 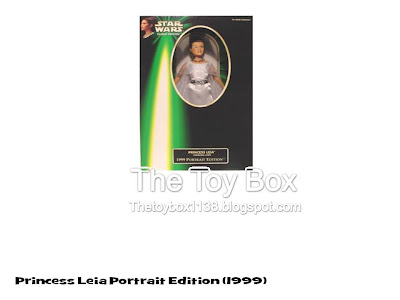 
2000 saw the final two figures released, one (in our opinion) being the best released for the 12 inch line, the Speeder Bike with Scout Trooper.  Both were exclusive to two seperate stores. 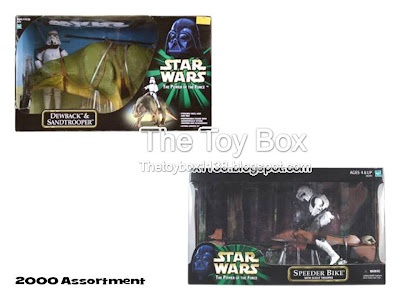 
New dolls have trickled out as sub sets to current toy lines, though to date, not in the abundance from this particular line. It seems that these days they are more of an after-thought for when Hasbro wants to get a quick infusion of cash.

While the 12 inch dolls may not be as popular as the 3 3/4 inch figures, they certainly have found a home in many a collector's hearts. Probably the biggest nod that this particular style of toy gets these days is from Sideshow Collectibles who focus on delivering only the highest quality 12 inch dolls - Though the price is often times a bit too much for the average collector.

Join us Monday as we continue our Star Wars 35th anniversary celebration with our look at Star Wars Micro Machines.

Thanks to Christopher H. who wrote in to advise us of a couple of errors, and one ommission on December 21, 2012.  We've since update this post with his additional information and corrections.  He also let us know that our opinoin of the 2000 Biker Scout with Speeder Bike was wrong, as it was not an opinion that this was the best release in the twelve inch line, but indeed a fact.  Thanks, Christopher!