We don't typically report on the most recent toys available, but when the opportunity arose to get the scoop on the latest exclusive Star Wars line - Droid Factory, we pounced on it. We hope you enjoy our look at this fantastic blend of Disney and Star Wars. 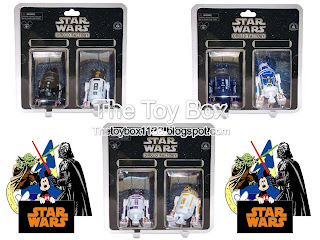 Star Wars weekends have become an annual occasion at Disney theme parks around the world. Each event brings new shows, attractions, and most importantly exclusive merchandise. With each passing year, Disney has had more exclusive Star Wars items for sale than any one vendor. Despite our personal displeasure with exclusives, this year’s items are far from disappointing.

Droid Factory allows you the customer to build your very own Astromech droid to coincide in scale with the current 3 3/4 inch line from Hasbro, complete with your own custom droid name. With over 71 different pieces, the possibilities are all but endless. These are indeed the droids you're looking for! 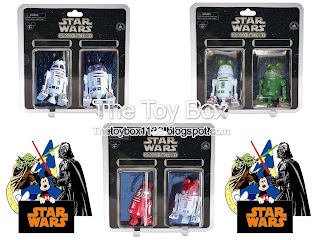 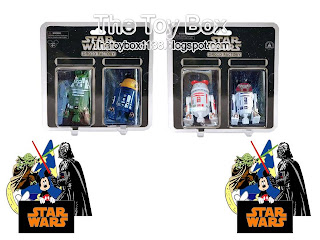 There are sixteen different dome styles to choose from (as seen below in the photo). We were lucky enough to have the various variations shared with us in mint in package form by the caring parents of Emmalee Campbell, daughter with 1P36 Deletion Syndrome. The Campbell family took great care to ensure that each droids pieces blended perfectly with the dome heads. 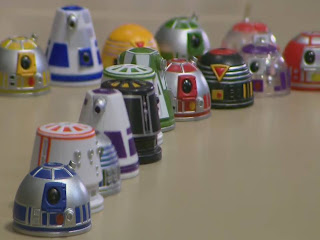 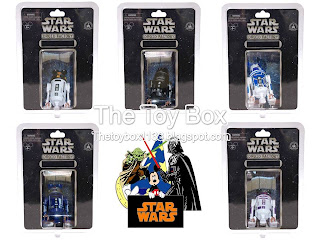 Each droid can be purchased as either a single pack or double pack. Each package flips open and close, securing on bubble grooves so that the toys can be easily removed without damaging the bubble pack itself. This is beneficial to both collectors and children who want to play with their toys, while at the same time keeping them mint in the package. Upon purchase, buyers receive a sheet of adhesive letters to create the droid's unique name. The single packs cost $11.95, while the double packs are priced at $18.95.

Out of the various droid types, three were created specifically for the Disney experience - R6, R8, and R9. To make the droids even more unique to Disney, each one can also be equipped with a removable set of mouse ears, such as those depicted on the famous Mouseketeer's show. For those wanting a more Star Wars themed hat, a set of Yoda ears will be released later down the line, as well as other fun hats such as Indiana Jones' fedora, Jack Sparrow's pirate hat, and a Goofy hat. 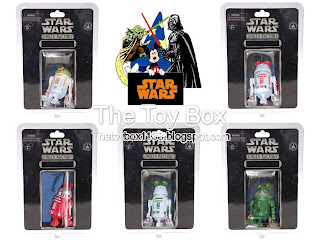 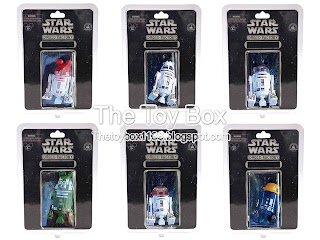 Fans have been incredibly receptive to this new line, to the point where it was being reported that most Disney locations sold out of their complete stock before the second day of the event was even over. Despite these reports, we have had several confirmations from various sources stating that these parts never sold out anywhere, and that supply is more than enough to meet demand. These sources have also confirmed that every piece of this 71 piece "set" is still readily available for customers. With that said, either someone is trying to build up a false sense of rarity, or they simply weren't around when employees refilled the bins.

Ebay has not yet blown up with Droid Factory auctions, but the handful that are up either have "Buy it Now" prices over $300.00, or are currently at a couple hundred dollars from bids. While these auctions are not for the complete 71 pieces, it's arguable that there is still some merit to the going/asking prices. One has to take into consideration that most of us would first need to get to a Disney location (plane ticket), and then into the park (admission price) to even buy the toys (price of toys). So consider all those costs when calculating the value of the current auctions.

A second series of droid parts has also been announced which is tentatively slated to be released around the time frame of the upcoming Star Wars Celebration this year.

As a final reminder, the figures that are show above are meant to depict every dome type available. One needs to keep in mind that a set like this has endless possibilities, and no two could look the same. From a monetary aspect, it would probably be more financially sound to collect all 71 pieces as opposed to trying to make every droid possible. 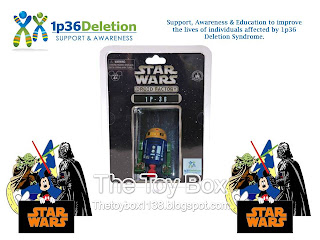 We'd like to once again thank the Campbell family for the photos, and the tidbits they shared with us. In closing, we'd like to introduce to you a special droid, 1P-36. This droid is special to the Campbell family as their daughter Emmalee has been diagnosed with the rare disorder 1P36 Deletion Syndrome. We wish her and her family all the best.

The family is currently in the works with a well known Star Wars VIP to get a petition together to have the droid created in her honor. There is no word just yet where things are in this regard, but we'll keep everyone posted on what we hear.

To read more on this rare disorder, click "HERE".

Click "HERE" to go back to the home page. For more posts related to this one, please click the labels below.
Posted by The Toy Box on May 21, 2012
Email ThisBlogThis!Share to TwitterShare to FacebookShare to Pinterest
Labels: 2010's, Disney, Droid Factory, Hasbro, Star Wars