Somewhat of a continuation of our prior post is today's post, Ewoks. Much like the Droids series, this particular cartoon/figure/comic book series seemed to come and go in the blink of an eye. 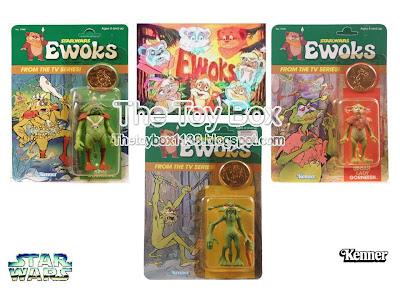 In a continued effort from Lucasfilm to re-spark interest in Star Wars, an animated series based on the Ewoks was produced for Saturday morning Cartoons. While it was much more popular than the Droids cartoon, and even managed to go on to a second series of episodes (for a total of 26 episodes), it just wasn't enough to keep the dwindling flame for Star Wars burning in a generation that was quickly growing up.

Kenner produced six figures for the line, but due to poor sales ceased production almost immediately. Each figure came packed in with a gold coin, which remains the most valuable piece of each figure. 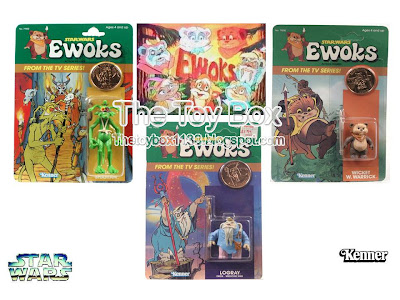 An interesting thing to note about the Ewok and Droids series is that while the Droids cartoon only lasted one season, it spawned more figures than the Ewoks series which ran for two seasons.

If you compare the figures that were produced in the Ewok line to the actual cartoon, you will note that there was certainly room to expand on the series as several of the main characters had yet to be produced. Why Kenner didn't focus their efforts on the clearly more popular show is a mystery to most people.

Lucasfilm once again was able to get Star Comics to produce a series of comics based on the show. While these too lasted longer than the Droids series, the books were cancelled after fourteen issues. 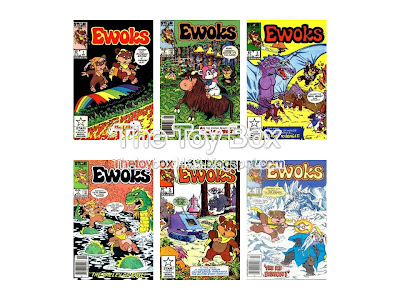 As is the case with the Droids figures, while the Ewoks figures hold a good value on the secondary market, they are not as highly sought after by collectors as other Star Wars lines.

The series ran for 14 issues between 1985 and 1986. The series stayed relatively confined to its own "world", crossing over only once in issue number ten with issue number 4 of the Droids comic series, which was also published by Star Comics. 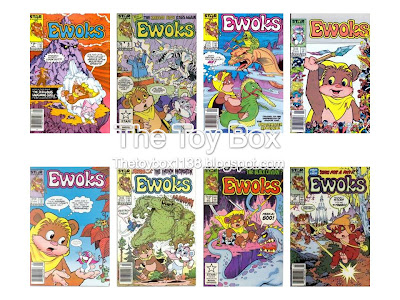 Despite being two very different series Droid and Ewoks had several similarities. They both had an action figure line. They both had a comic book series, and both shows have never been released in a complete series on any format, but are available in incomplete compilations on both VHS and DVD.

The series has its following, to be sure, and fans have asked repeatedly for Lucasfilm to produce a completed series on DVD. To date those requests have gone ignored. Much like the anti-cherished Holiday Special, we will probably never see this series as a whole unless someone is offering a bootleg or originally taped versions from the 80's.

This wraps up our month long celebration of 35 years of Star Wars, but join us this Friday, June 1, 2012 where we have another special announcement, and don't forget to join us next Monday for our look at Toy Story 2 (Thinkway Toys)!