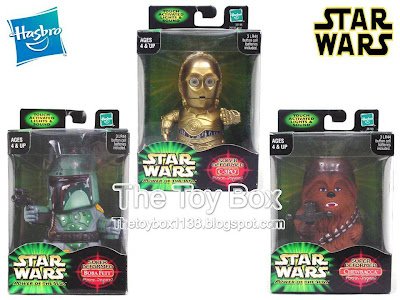 With the Power of the Jedi line up of 3 3/4 action figures running strong, Hasbro was eager to continue branching out into further Star Wars based areas. One of these extensions was the Super Deformed, or Palm Talkers.

The concept was designed to look like over exaggerations of each character, making them almost cartoony, a popular art style of this period thanks to several shows running on Cartoon Network, as well as several monthly comic book titles from independent artists. 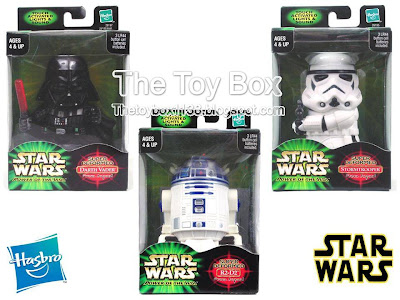 Each non-posable character had little metal studs at the bottom which when placed in the palm of ones hand would activate sounds and voices from the films.

A total of six Super Deformed characters were released under the Power of the Jedi line; Boba Fett, C-3PO, Chewbacca, Darth Vader, R2-D2, and a Stormtrooper. 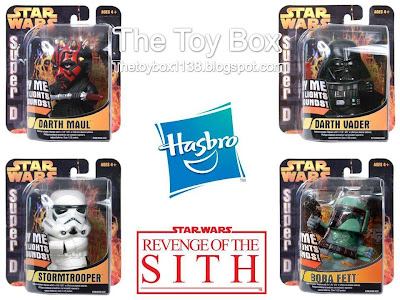 When the Revenge of the Sith line was released, Super Deformed characters made a reappearance, now known simply as Super D.

The majority of the eight characters released were simply repacks of the now first series. The only two new figures produced were Darth Maul and Yoda.

The packaging was redesigned to be a carded bubble as opposed to the first figures which were released in mini window boxes. 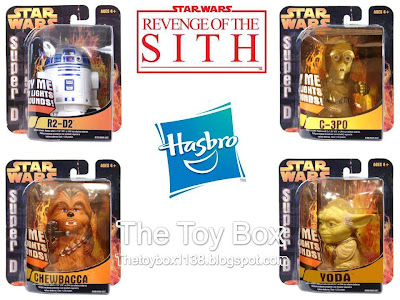 Much like the Power of the Jedi wave of deforms, the Revenge of the Sith line found little success in the toy isles. Characters like Boba Fett, Darth Vader, and occasionally the droids and Stormtrooper were picked up, but for the most part the majority of the line eventually made its way to the clearance isles.

In a world where there seems to be an overabundance of Star Wars merchandise, it's difficult to gauge which items will rocket into people's collections, and which will die a stagnant death in stores. Unfortunately Super Deformed figures were the latter.

Tomy released similar deformed characters for the Episode I Palm Talkers. They were essentially the same concept, though contained a much more Japanese look and feel to the packaging in hopes of grabbing the attention of the Otaku crowd. Much like the other retail versions, they didn't impress many. 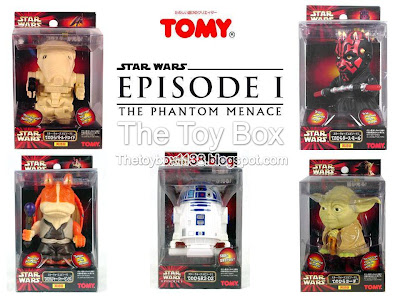 Still, much like anything, Super Deformed Star Wars "figures" have their homes in certain collections where they remain treasures. Due to their lack of collectability, or rather, the desire for them to be collected by the majority of fans, they also offer a great conversation piece for their uniqueness. They weren't bad item’s, they just weren't the next best thing.

Join us Friday as we continue our Star Wars 35th anniversary celebration with our look at Power of the Force 12" Collector's Series!

Posted by OK Records 1138 on May 07, 2012
Email ThisBlogThis!Share to TwitterShare to FacebookShare to Pinterest
Labels: 1990's, Episode I, Hasbro, Power of the Jedi, Revenge of the Sith, Star Wars, Tomy