It’s the 35th anniversary of Star Wars: A New Hope! Yes, all those years ago, back in 1977, George Lucas made movie history with his sci-fi masterpiece that has since gone on to influence decades of movie makers, and of course dominate the toy isle year after year with more toys ever imaginable. Though, it has had its share of rocky paths leading towards a fate unknown...

In 1985 the Star Wars well seemed all but pumped dry. The Power of the Force line was struggling to find sales in the toy isle, and for all intensive purposes, the days of Star Wars were over.

Despite his initial lack of success with television (in the form of the Holiday Special), Lucas cut a deal to produce two television series - One of which was Droids: The Adventures of C-3PO and R2-D2. While back then the series didn't fall into any particular timeline of the Star Wars universe, today it is noted that it falls in between Revenge of the Sith and A New Hope. Though personally, we see a lot of discrepancies with this suggestion - though the show does contain a lot of references that were later carried over to the Prequels.

While the show may have not wowed fans young and old, it was enough of a boost in interest for Kenner to produce a new series of toys. Twelve figures were produced for what was initially to be a first series (of at least two).

Each figure came packed in a bright and beautiful package with a gold coin. Much like the original Power of the Force line which had silver coins packaged in with each figure, the coins remain the most valuable piece in the collection. 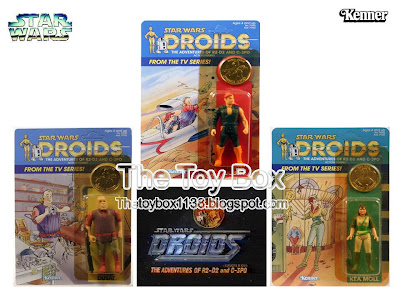 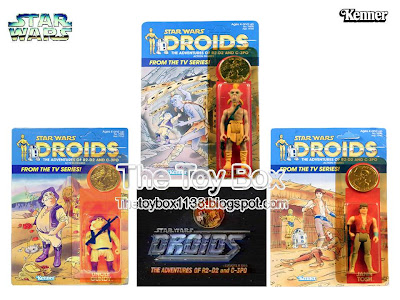 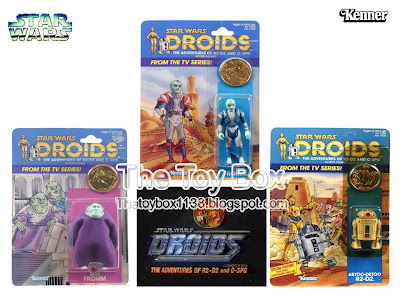 An interesting play by Kenner was to release the A-Wing Pilot in the line. It was interesting because no such character had any presence in the series, so it made little sense to produce him for the line. The figure was also released in the original Power of the Force line. This raises the question of what series this figure was initially intended for.

We didn't think that Boba Fett fit into the line either until reader Chris Pederson wrote in to tell us, "Boba Fett was in the first story arc. We even saw his racer. He captured Vlix, Sise and Tigg Fromm and was going to bring them to Jabba The Hutt." Thanks for the info, Chris! 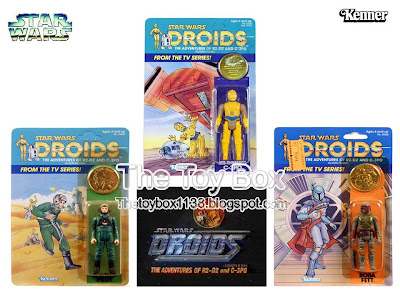 Kenner also produced a handful of vehicles from the show. What makes fans lean more towards the A-Wing pilot being intended for the Droids line is that an A-Wing fighter was also produced. No such vehicle was produced when the figure was released with the Power of the Force line. 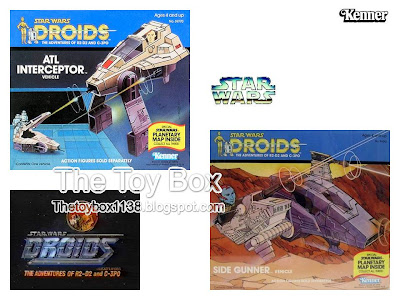 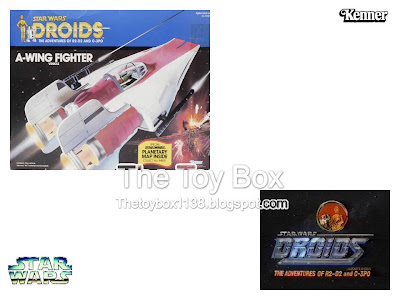 Ratings for the show were poor (at best), and after only one season (or 13 episodes), the series was cancelled. 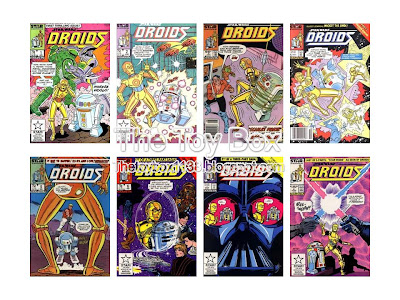 To help push the series, Lucasfilm was able to get a contract with Star Comics, Marvel Comics more kid oriented label, to produce a series of comics. They however performed just as poorly on the market as the animated series did, and were cancelled after eight issues.

The most notable issues from this series are numbers 6-8 which contain a retelling of A New Hope from the perspective of the droids. Yes, it is the same exact story you've seen and read time and time again, but to see it from a different perspective is somewhat exciting to fans. Issue four also contained a cross over into the Ewoks comics (issue 10).

Despite many fans request, Lucasfilm has yet to release a complete series on any format of the animated series. There are however compilations of the series on VHS and DVD which contain various episodes.

The toys, while not as highly sought after by fans as other vintage Star Wars line, still fetch a fair amount on the secondary market. The most valuable piece known to be in existence is the one and only version of a carded Vex which was mocked up for a potential series 2. We don't know who the owner is, or if he/she would ever sell, but we can guarantee the price would be far more than any of us here at The Toy Box could ever afford.

Join us Monday as we conclude our Star Wars 35th anniversary celebration with our look at Ewoks!