1986 was an interesting year for Ghostbusters fans. It was that moment in time where not one, but two cartoons using the Ghostbusters banner aired on network televisions as syndicated series. How did this happen? What led to this phenomenon of television events? 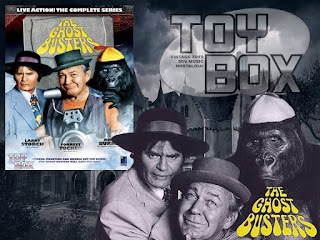 First, we must step back in time to the seventies, where CBS worked with Filmation to develop the live action show, Ghost Busters. The series starred Forrest Tucker as Jake Kong, Larry Storch as Eddie Spencer, Bob Burns as Tracy, and Lou Scheimer, founder of Filmation, as the voice of Zero.

Ghost Busters, yes, two words, made use of creatures, ghouls and ghosts from popular literature, as well as actual historical figures, and followed a formulaic trope of sending the group to a castle and graveyard, where they would essentially battle the "villain of the week". Each series also parodied a bit from Mission: Impossible, via its open credits, which saw Tracy getting the team's assignment form an inanimate object (Zero), which Scheimer would state after giving said mission, that the message would self destruct in five seconds.

Despite only running for one season, which consisted of fifteen episodes, Ghost Busters faired well in the ratings, and could have been green lit for a second season. However, Filmation instead opted to drop the series, and utilize the resources for their number one show, The Shazam! / ISIS Hour.

While the show continued to exist in re-runs for a short period, a rumor surfaced that the original master tapes of the fifteen episodes had been destroyed. Fortunately, this turned out to be an incorrect statement, and when discovered, the show was released in its entirety on DVD in 2007 by BCI.

As of 2009, BCI ceased production, and Mill Creek obtained the rights, re-releasing the DVD. However, this too is now out of print, and the series can easily set you back sixty-plus dollars. 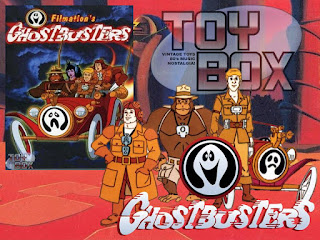 Fast forward back to the 80's.

Many fans of cartoons already know of the controversy surrounding Filmation's relationship with Columbia Pictures, the makers of the 1984 Ghostbusters film. Columbia "overlooked" the name, which Filmation had a copyright and trademark for. As is usually the case, meetings with lawyers ensured, and the matter was ultimately settled out of court.

However, things remained sour. while Columbia licensed the name from Filmation for a fee, they also agreed to pay them 1% of the film's profits. The latter never came to fruition because the studio claimed no profits from the film, a claim Schiemer refuted, but never got reparations for.

Despite this, Filmation was undeterred. Rather than take it on the chin, they instead sought to capitalize on the popularity of the film by revisiting their original, and unrelated, 1975 television series. This time, however, they would go the route of an animated series.

Filmation was already experiencing great success in the 80's with hits such as He-Man and the Masters of the Universe, She-Ra Princess of Power, and in general were no strangers to action adventure cartoons. Prior successes included series based on popular DC Comics characters, Superman, Batman, and Shazam, as well as popular fictional characters, Zorro, The Lone Ranger, and Tarzan. To state it directly, they already had the experience and formula down to a science, running their operations like a well oiled machine. All of this made it relatively easy for them to develop a series. Despite this, success was not to be had. 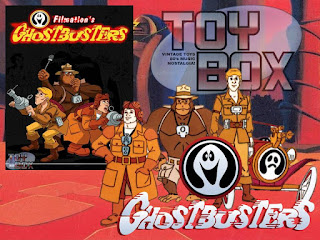 Many people, including Lou Scheimer, like to say that Filmation's biggest misstep was to create a show that would directly compete with The Real Ghostbusters, citing that it caused confusion for viewers who couldn't differentiate between the two. I suppose in hindsight, this is probably a true statement. I myself remember seeing the Filmation iteration in spurts, and being confused in my young mind about who these characters were.

Ultimately, fans seemed to pick a side, and Filmations version was not the popular choice. Much like Go-Bots, which were considered the, "poor-man's Transformer", so too were those who opted for Filmation's Ghostbusters over The Real Ghostbusters. Not only did the cartoon series falter and fizzle out, but so too did the toy line which served to support it.

Filmation's Ghostbusters ran for a single season, consisting of sixty-five episodes, and ran from September 8, 1986 through December 5, 1986. If you think about it, in all honesty, this isn't necessarily a failure. Most cartoons of the 80's only lasted this long. In fact, it was more rare for a cartoon to get a second (and beyond) season, than not.

Much like the live action series, BCI released the series on DVD, and this was followed by Mill Creek re-releasing it after it went out of print. However, also like the original show, these two volumes are out of print. Further, volume two remains far more scarce than the first, making it not only expensive to purchase both sets, but also difficult due to limited availability. 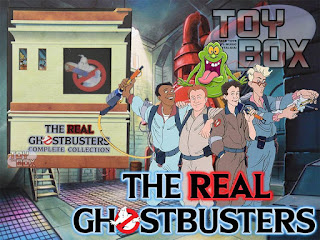 Released on television a week later, The Real Ghostbusters aired from September 13, 1986 through December 5, 1991, making it one of the longest running cartoon series of all time. The show continues the adventures of the four famous Ghostbusters from the 1984 film, and takes a clear shot at Filmation by way of adding and emphasizing the show as "THE REAL" members of the popular paranormal team.

In 1988, the series was retitled to Slimer! and the Real Ghostbusters, with episodes being extended to one hour to feature a full length Real Ghostbusters story, along with several Slimer shorts. The popularity of the show was amplified by a fantastic action figure line, with even Hi-C getting into the game with the kids drink of choice, Ecto Cooler.

When The Real Ghostbusters came to an end, it was with seven seasons under its belt, which comprised of a whopping one hundred forty-seven episodes. Since then, the show periodically makes its way back to syndication, and even had a stint on Netflix's streaming service in 2017, which was removed in 2019.

Obtaining this series on DVD can be a bit of a challenge. While you can find a ten volume set for relatively cheap, this is missing twenty-nine "stories", which includes several episodes, as well as all the Slimer shorts. As such, the only way presently to get the entire series is to purchase the now out of print complete box set, released by Sony. However, this can cost you anywhere from four hundred to one thousand dollars! 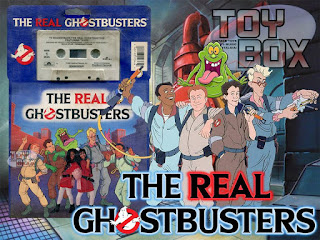 There's no doubt that there's money to be made on the Ghostbusters franchise. In fact, the cartoon series proved so popular, that the show even garnered a unique item for its time, a soundtrack!

Yes, sir (and ma'am), you could get a cassette in 1986 which featured ten full length songs. The album was released by Polydor Records, and featured lead vocals by Tonya Townsend, and Tyren Perry, AKA, the duo Tahiti.

Don't feel bad if you don't recognize the names. With exception of Perry, who released the album, Don't Rush It, in 1989, the girls have not done much in the music industry.

I've honestly never seen one of these cassettes in the wild, but as an 80's music aficionado, it's on my list. I want this album, and I want it a lot. Not because it's any good, but because it exists.

Here's the part where I will probably find myself on the unpopular side of town. I personally favor Filmation's series as an adult. For me, it's a lot of fun. This is mainly based on its lighter tone, and often "silly" premise, which also makes it more relaxing to watch. Filmation is also the producers of some of my all-time favorite cartoon shows, so in that regard, it also feels familiar to me.

The Real Ghostbusters, on the other hand, are deeply laden with story, and continuity. While they definitely have a more fleshed out universe to play in, the darker, and more serious tone, doesn't really appeal to me. Truth be told, I was never really that big of a Ghostbusters fan to begin with.

But, to each their own, right?