Phil Collins. Singer, songwriter...Actor? Sure, okay. Why not? He doesn't scream "leading man material" to me, but I suppose my opinion is only one of millions. 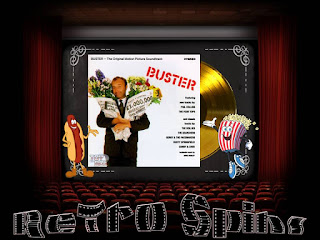 It's a tough life being a small-time thief with a heart of gold. But Buster Edward's dream of the good life for him and his family fast becomes a reality when he pulls off the greatest train robbery in history: a heist of over $7 million in used bank notes! On the run from the law, Buster and family take flight to Acapulco where it's sunshine and champagne all the way. But even paradise has its problems; the money is fast disappearing and his wife June misses their old way of life. Leaving Buster in Acapulco to return home, he soon realizes that all the money in the world can't take the place of the women he loves. If he goes back, he faces a harsh prison sentence - but for Buster, that sacrifice may be what life, and love, is all about. - Back of the original VHS

The soundtrack to Buster really threw me off guard, and messed with my OCD. It was all over the place musically.

It launches at you with the Phil Collins hit, Two Hearts, then proceeds into the realm of the sixties with The Hollies Just One Look before jumping back to a second Phil Collins track and then dives into a score / instrumental song. This consistent bouncing around continues for the remainder of the album. Just as you're getting into a style, it shifts. It's kind of annoying.

I suppose in the long run, had I done a bit of research, I wouldn't have included this album in my Retro Spin. It deviates more so than not from the realm of the 80's.

It's not all for loss though. The inclusion of the great tracks from Collins certainly makes up for this. It's difficult to hate it with the likes of Two Hearts and Groovy Kind Of Love contained within in. Naturally, these two tracks got added to my 80's shuffle mixes.

The Four Tops weren't about to sit the 1980's out. They'd been contributing new material to soundtracks (while also producing studio albums) throughout the decade, and it was nice to see them do so again here. Their track, Loco In Acapulco is a pretty good song and even charted in other countries.

Overall, it wasn't what I expected, and it got annoying with its consistent shifting of styles, but I didn't hate it. For the most part, the tracks encompassing the album weren't bad songs. Just somewhat out of place with each other.

Click "HERE" to go back to the home page. For more posts related to this one, please click the labels below.
Posted by The Toy Box on October 20, 2020
Email ThisBlogThis!Share to TwitterShare to FacebookShare to Pinterest
Labels: 1988, 80's Album Review, 80's Music, 80's Music Review, Buster, Music of the 80's, Retro Spins