For being such a classic in the world of animation back in 1981, it's interesting that Heavy Metal never saw a retail release on VHS until 1996. Believe it or not, all of this came down to the soundtrack as the problem. With so many artists contributing to the film, legal issues surrounding their songs delayed the home video release. This was because many of the tracks were initially only licensed for the original soundtrack and theatrical release with no home video rights.

You can thank Kevin Eastman, yes the one and only of Teenage Mutant Ninja Turtles, for  saving the film from obscurity. He bought the publishing rights to the magazine in 1992, and was able to obtain the rights to the music from the film for use in a home video release from there. Way to go, Kevin! 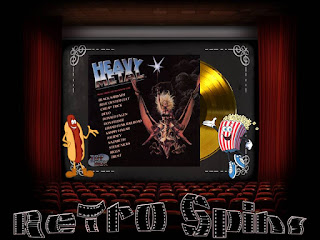 Based on the fantastical illustrated magazine HEAVY METAL, producer IVAN REITMAN enlists the help of some of Hollywood's animation masters to create the otherworldly tale of a glowing green orb from outer space that spread destruction throughout the galaxy. Only when encountered by its one true enemy - to whom it is inexplicably drawn - will goodness prevail throughout the universe.

Well, the back cover certainly sums up a lot of this soundtrack, now doesn't it?

When the film saw its debut on VHS in 1996, it opened up not only a great new world of animation, but also introduced me to the soundtrack. Admittedly, there were really only three songs from the album that I really enjoyed back in the day; Blue Oyster Cult's Veteran Of The Psychic War, Reach Out from Cheap Trick and The Mob Rules from Black Sabbath.

But is there something else the soundtrack can offer that I may have missed from back in the day? Are there great songs my young mind didn't appreciate at the time, but today my more mature self would? Only a Retro Spin would answer those questions.

The album is still pretty boring to me, but I did find one additional Cheap Trick track I enjoyed, I Must Be Dreamin'. However, I don't think I enjoyed it enough to add it to my shuffle lists. Oh well. At least I gave it a try.

With a running time of over one hour, it's interesting to note that the soundtrack still has omissions. Two songs to be exact. Through Being Cool by Devo and E5150 by Black Sabbath. Fear not though, you can get these songs on these bands respective studio albums from 1981. Respectively, those are New Traditionalists (Devo) and The Mob Rules (Black Sabbath). Additionally, there was a second track from Blue Oyster Cult entitled Vengeance, which was written for the film, but not used. This song is also available via their studio album, Fire Of Unknown Origin, also released in 1981.

Click "HERE" to go back to the home page. For more posts related to this one, please click the labels below.
Posted by The Toy Box on March 31, 2020
Email ThisBlogThis!Share to TwitterShare to FacebookShare to Pinterest
Labels: 1981, 80's Album Review, 80's Music, 80's Music Review, Heavy Metal, Music of the 80's, Retro Spins