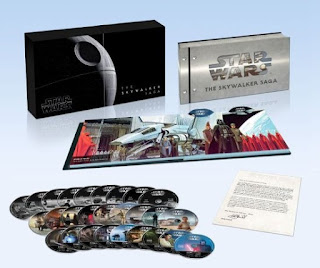 I admit it, I got a bit excited when the announcement of Star Wars being released in 4K was given. However, as the day of release, March 31, draws closer and closer, I found myself wondering if this $249.99 set would truly be worth every penny spent. Boy, I'm sure glad I looked into this further before taking the plunge, because it turns out this set may not have been worth my money.

There's no doubt that true 4K is a great way to watch films. However, as far as Star Wars is concerned, none of the movies were filmed in a manner to take advantage of this. Some of the films were created using 2K Masters, while others only 1080p. So what does this mean? Turns out, quite a bit.

To help walk you through what I learned, let's break each Trilogy down respectively.

While the original 35mm prints of A New Hope, The Empire Strikes Back and Return of the Jedi could be scanned in at native 4K, since this set does not include the original theatrical cuts this won't be happening. This release is utilizing the multiple re-released and updated versions of the Special Edition which were initially digitally restored from the original prints to 1080p. Meaning these too will never look any better than the Blu-Ray releases.

The Force Awakens, The Last Jedi and The Rise of Skywalker are all 2K Masters. Meaning, much like The Phantom Menace, they could be upgraded to native 4K.

So now you know that we know the formats each of the films are in, let's dig in further.

2K has 2,211,840 pixels on the screen. However, in order to be 4K, it needs 8,294,400. In order to achieve this, 6,220,800 additional pixels need to be digitally created. Essentially, the program being utilized to complete this process is filling in gaps, adding pixels in the same color next to the one it would sit next to. In this process, it hopefully builds a puzzle that doesn't have any blemishes when complete - i.e. colors that don't belong next to each other.

This release of the films also doesn't utilize Dolby Vision, which is essentially what makes the 4K format worth while. Dolby Vision adjusts the picture scene-by-scene, sometimes frame-by-frame, allowing you to see more detail with better color accuracy. It is constantly making adjustments so that each image on the screen is optimized. While the Disney+ streaming versions utilize Dolby Vision, Disney has withheld this from this home video release.

With all of this information in hand, I essentially came to the following conclusion - Why bother? I'm already paying for Disney+, and truth be told, haven't bothered to sit down and watch the Star Wars films. So why would I spend more money to get a lesser product?

Click "HERE" to go back to the home page. For more posts related to this one, please click the labels below.
Posted by The Toy Box on March 24, 2020
Email ThisBlogThis!Share to TwitterShare to FacebookShare to Pinterest