Skeleton Warriors is one of those series we've been trying to get around to for the longest time...Well, that and Bionic Six, AD&D, Tiger Sharks, the last few years of vintage TMNT....Sorry, this list could go on for a while. Needless to say, we have a lot of toy lines left to cover to keep us busy for a while. Vintage Transformers (which we've only looked at 1984 so far), Batman Forever / Batman and Robin...Sorry. Again, this list could go on and on.

Skeleton Warriors began their brief impact on the world with the 1994 to 1995 CBS cartoon which ran for just thirteen episodes (aka one season). Though it overall wouldn't pan out to be widely popular, many companies lined up to invest in it via products.

Marvel produced a four issue comic book mini series and Neversoft created a console game for the Sega Saturn and Playstation. Of course, the biggest support the series got was the 1994 Playmates Toys action figure line.

There were eight figures in total released, and two creature / vehicles. Overall, it's not a bad series - Despite the lack of major popularity. Playmates definitely brought their "A" game (as they so often do), developing a very well put together line featuring both quality figures and fun accessories. Not only that, but check out that awesome packaging! They don't make them like that anymore. 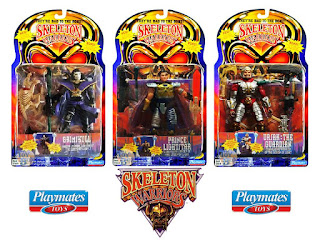 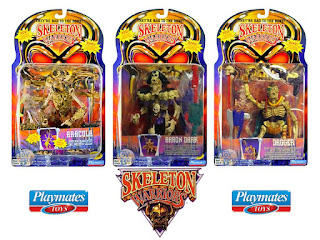 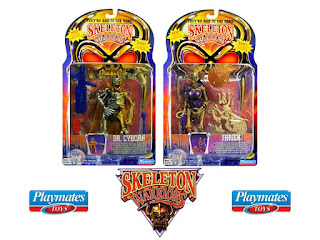 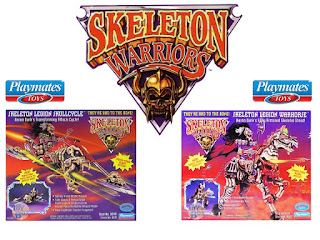 For now, these are not difficult figures to track down, nor are they all that expensive. You can pick them up here and there for as little as $5.00, mint in the package. While the vehicles go for a little more, at $30.00 each they're not necessarily bank breaking. If you're looking for a cheap line to add to your collection, check them out.

Click "HERE" to go back to the home page. For more posts related to this one, please click the labels below.
Posted by The Toy Box on April 24, 2017
Email ThisBlogThis!Share to TwitterShare to FacebookShare to Pinterest
Labels: 1990's, Playmates Toys, Skeleton Warriors