Bandai unfortunately doesn't get much love around here at The Toy Box. We hope to make up for that soon. We'll start with today's round - Big Guy and Rusty the Boy Robot.

The duo began their climb to fame in the 1995 series of the same name by Frank Miller and Geof Darrow. Frank Miller is of course well known in the comic book industry for his gigantic ego work on Batman, 300, Ronin, and many other iconic stories. Darrow's most notable work includes Hard Boiled, Shaolin Cowboy, and of course, Big Guy and Rusty the Boy Robot. 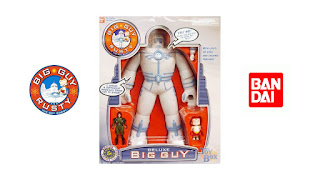 The series of figures we see here today are the ones based off of the 1999 adaption of the character for the Fox Kids cartoon series which ran for twenty-six episodes between September 1999 and March 2001. One of the most notable actors attached to the project was Tim Curry as the voice of Dr. Neugog.

Not too many toys were produced for the series - Which is disappointing considering the volume of characters that were featured in the show. What we got was a Deluxe Big Guy (shown on the left), Flying Big Guy, and Talking Big Guy (both below). 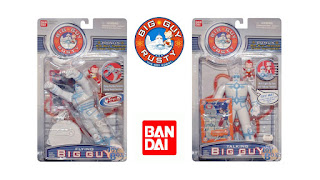 A Deluxe Targo was scheduled for release, but got cancelled before going into production. 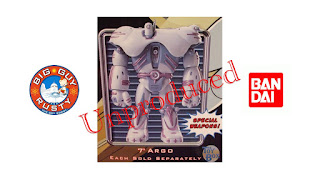 It's not difficult to find Bandai's line of BGaR "figures" on secondary markets. In fact, they seem more so in abundance than when they were on store shelves. You can easily nab the two smaller figures for around ten bucks, while the Deluxe one will set you back around $35.00.

Click "HERE" to go back to the home page. For more posts related to this one, please click the labels below.
Posted by The Toy Box on April 03, 2017
Email ThisBlogThis!Share to TwitterShare to FacebookShare to Pinterest
Labels: 1990's, Bandai, Big Guy, Big Guy and Rusty the Boy Robot, Rusty the Boy Robot