Admittedly we don't know much about Iggy Pop - Well, beyond his appearance in the awful sequel, The Crow: City of Angels. We do know that he's been around forever, and has been one of the most influential individuals in the punk scene. We also know that he has a fair amount of albums - Which we've heard a total of zero times.

So why would we choose to talk about Iggy Pop, a man we know absolutely nothing about? Toys, of course! 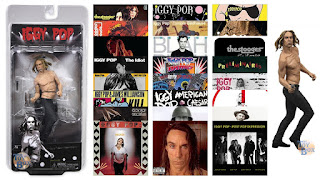 In 2011 NECA produced Iggy (along with other iconic musicians) in plastic form. Even if you don't like or know his music, there's one thing for certain - You could pick him out of a lineup. He's so iconic in the world of music that despite not knowing his music he's got name recognition. In other words, place this figure on your shelf, and most people would still be able to point at it and say, "Hey, Iggy Pop!"

The sculpt is spot on, and despite lacking articulation, the figure is pretty awesome. The look of no shirt with long black pants goes as hand and hand with Iggy as Michael Jackson does with a sequin glove.

Finding one is relatively easy these days, and if you're patient you can even get one mint in the package for less than the original retail price.

Click "HERE" to go back to the home page. For more posts related to this one, please click the labels below.
Posted by The Toy Box on April 10, 2017
Email ThisBlogThis!Share to TwitterShare to FacebookShare to Pinterest
Labels: 2010's, Iggy Pop, Iggy Pop and the Stooges, NECA, The Stooges