Good grief. Who would have thought that tracking down a Devo figure would not only prove to be incredibly difficult, but also expensive?

Today we visit another NECA music based line, and if you couldn't deduce at this point that it is Devo...Well, it's Devo. 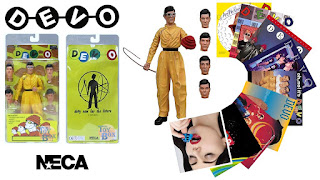 Many people of course know of Devo for their 1980 chart topper Whip It, which was featured on their third album, Freedom of Choice. Unfortunately for the band, not many people know them for any other songs beyond that with the exception of Working In A Coal Mine - Which was included as a 7 inch bonus single in their 1981 New Traditionalists album, and later used in the film Heavy Metal, released that same year.

Though many would consider the band a one hit wonder, the fact is that much like so many "odd" bands of the 80's, they have a strong cult following. Devo has released nine studio albums since 1978, with their latest being 2010's Something for Everybody.

In 2005, NECA produced a unique Devo figure that featured five heads - One for each band member. One could of course buy five figures to ensure a head for each member was always attached to the body - and of course have twenty additional heads in the process. Or, you could purchase the (below) five pack which featured one of each member, body and all. The added perk to going this route was the inclusion of an autographed mini poster. 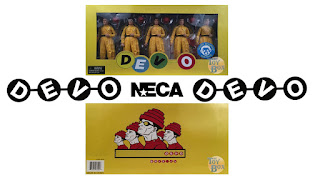 Of course if you missed the boat on getting these when they were initially released you're not going to find yourself in a very good spot. These days the single packed figure will cost you upwards of $60.00 with the five pack ranging between $150.00 and $200.00. Do any of you see these prices a problem? If so, then you must whip it!

If you'd rather skip on the plastic, and see the real deal, Devo has you covered. The band still tours, and yes, they even continue to wear the yellow jump suits and red energy dome hats.

Click "HERE" to go back to the home page. For more posts related to this one, please click the labels below.
Posted by The Toy Box on April 17, 2017
Email ThisBlogThis!Share to TwitterShare to FacebookShare to Pinterest
Labels: 2000's, Devo, NECA