What a sad day this is for fans of Carrie Fisher. Whether it's for her work in films such as Star Wars, Blues Brothers, When Harry Met Sally, and so many more, or her famous books such as Postcards From the Edge, Wishful Drinking, and like her films, so many more, one thing is for certain - Carrie Fisher will be missed.

As many of you know, Carrie Fisher passed away at age 60 today of a heart attack. The news was shocking to fans across the globe who had just recently heard that she was in stable condition after a medical emergency just days earlier. When all seemed to be righting itself, tragedy loomed its ugly head. 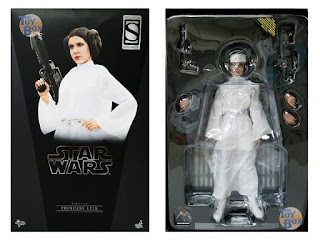 Though we will miss her deeply as the Princess of a galaxy far, far away, we can take with us some solace that she will forever be immortalized on film, paper, and even plastic. Though she is gone from this Earth, we will always have a part of her with us.

We'd like to take this moment to remember Ms. Fisher with a look at one of the best renditions of her we've ever seen - Hot Toys 2016 Princess Leia. The "doll" was released in 2016, and much like the many Hot Toys products captures the look of both Carrie Fisher and Princess Leia to a "T". It'd definitely an item we recommend to any fan of Ms. Fisher or Star Wars. 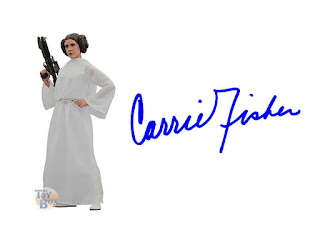 No, we know that no toy will ever replace having the real Carrie Fisher in our world. Nor would we even suggest it possible. Carrie Fisher will forever be missed.

Click "HERE" to go back to the home page. For more posts related to this one, please click the labels below.
Posted by The Toy Box on December 27, 2016
Email ThisBlogThis!Share to TwitterShare to FacebookShare to Pinterest
Labels: 2010's, Carrie Fisher, Hot Toys, Princess Leia