Now the rest that nobody seems to know....

Guy Fawkes and his companions
Did the scheme contrive,
To blow the King and Parliament
All up alive.
Threescore barrels, laid below,
To prove old England's overthrow.
But, by God's providence, him they catch,
With a dark lantern, lighting a match!
A stick and a stake
For King James's sake!
If you won't give me one,
I'll take two,
The better for me,
And the worse for you.
A rope, a rope, to hang the Pope,
A penn'orth of cheese to choke him.
A pint of beer to wash it down,
And a jolly good fire to burn him.
Holloa, boys! Holloa, boys! Make the bells ring!
Holloa, boys! Holloa, boys! God save the King!
Hip, hip, hooor-r-ray!

It's an old English folk verse which was written in 1870, and mind you the above is one of many translations that exist.

The first portion of the poem is of course widely known for its use in V for Vendetta. While we didn't personally care for the film, there are many out there that appreciate its strong political story, and themes of anarchy. The film retains a 73% on Rotten Tomatoes, which leaves it at about average. 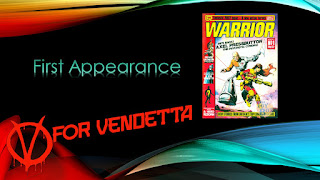 What many people seem to not know about the movie is that it was actually a comic book series first. It was written by renowned comic author Alan Moore, and first published in the black and white pages of Warrior - A British anthology comic published by Quality Communications which ran from 1982 to 1985. Unfortunately V was one of the least popular stories in the strip based books, and when Warrior was cancelled, so to was the remainder of Moore's story.

Though many publishers tried to convince Moore to let them publish his whole story, it wouldn't be until DC Comics made an offer that this would actually happen. DC produced ten issues of the series between September 1988 and May of 1989 which also included the republishing (now in color) of the original Warrior stories. Actual new material wasn't printed until issue number 7, which is where the story would have picked up in Warrior number 27 and 28 had that series continued. 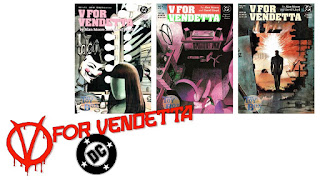 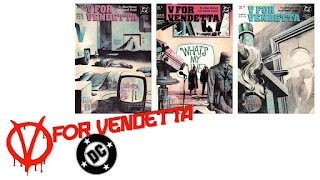 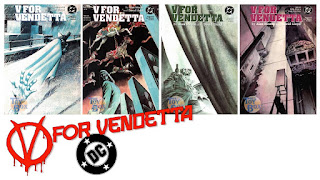 Since then, the mini series has been printed numerous times in trade paperback fashion, only boosting its popularity more. This of course led to the film in 2006, which in turn lead to the NECA toys / products in 2007.

NECA produced four items to coincide with the film's release; a seven inch figure, a twelve inch talking figure, a reproduction of V's dagger, and a 12 inch resin statue. As per NECA's typical ventures, all the items are of great quality, and each is unique in its own way. Admittedly, the talking V is fairly annoying because he doesn't so much say various phrases as he just prattles on for about a minute. Thank goodness there's an on / off button. 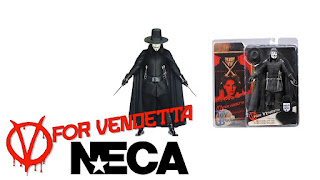 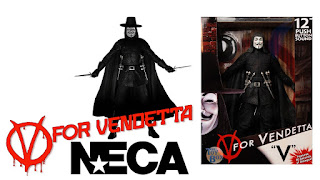 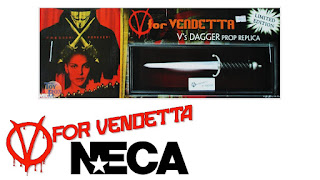 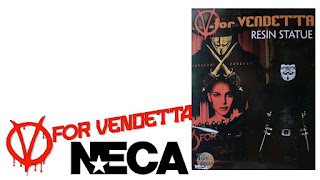 Prices are kind of all over the map for these items. For example, the seven inch figure can sell for $40.00 one day mint in the package, and then $60.00 a few days later. The resin statue has been known to sell for as much as $150.00, and then not sell at all when listed for half that, yet in the same condition. These fluctuations of prices continue on for the rest of the items as well. There really is no rhyme or reason to it. Suffice to say that patience could garner you them all at a fairly cheap price, or really high if you're not.

Click "HERE" to go back to the home page. For more posts related to this one, please click the labels below.
Posted by The Toy Box on December 12, 2016
Email ThisBlogThis!Share to TwitterShare to FacebookShare to Pinterest
Labels: 1980's, 2000's, Alan Moore, Comic Book Toys, Comic Books, DC Comics, NECA, Quality Comics, V for Vendetta