Valve is definitely a company known for producing quality titles. They don't release many, and thankfully so as this allows them to deliver what many consider to be perfect games. Left 4 Dead is no exception to the rule. It offers players 4-player co-op online, as well as versus modes while balancing all of this finely in a survival horror setting. With heavy focus on cooperative play and massive replay value, it's no wonder that the title quickly became such a critical success in the gaming world.

With such high praise for the game, it's disappointing that NECA's action figure line never really took off. Some could say that part of this blame would fall on NECA for not really trying. Unlike most action figure lines that launch with a strong lineup of characters - I.E. main characters, NECA released the Boomer and Smoker "zombies"...And then nothing else. Not even at the time of its launch was there any word that any other characters were on the horizon, so it's no surprise that overall the series was met with a whimper. 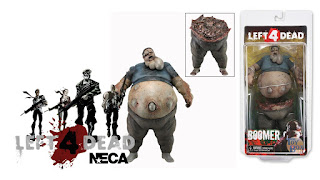 We can't help but feel like this was a majorly missed opportunity. Had NECA released two of the main characters alongside the Boomer and Smoker it not only would have give fans incentive to buy, but also two remaining main characters to push a second wave alongside other antagonists such as the Witch and Hunter, and even a deluxe Tank. The marketing potential seemed so obvious that we can't fathom how NECA missed this one.

This seems to be a general flaw of the company. They often times give the impression that they're so eager to launch a line that nobody at their headquarters takes the time to ask, "How can we do this right?" The company is notorious for launching lines that feel abandoned before they even start. 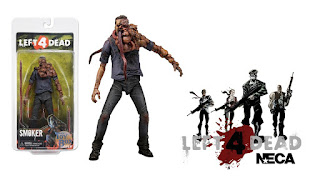 We won't deny that the two characters produced aren't spectacular in terms of sculpt, paint and overall design. In those departments, quite frankly, they're fantastic. Which only makes it more of a shame that this is all we got. There was so much appeal and draw for this series based on how popular the game franchise is that it's really disappointing to see how this line fizzled so fast.

Though we're sure the license has long since expired, if NECA would open their eyes they would see that there is still a lot of potential for Left 4 Dead figures. This is obvious by how the Boomer and Smoker sell for upwards of $35.00 to $40.00 a piece. We often wonder why toy manufacturers in general don't have a focus group that analyzes secondary markets for pricing to see which lines they should resurrect. We suppose if they haven't gotten it by now, they're probably not going to.

Click "HERE" to go back to the home page. For more posts related to this one, please click the labels below.
Posted by The Toy Box on December 19, 2016
Email ThisBlogThis!Share to TwitterShare to FacebookShare to Pinterest
Labels: 2010's, Left 4 Dead, NECA, Valve, Video Game Toys