He-Man (AKA The New Adventures of He-Man) (Mattel)

This post comes from a request from our Facebook The Toy Box reader Gregory Jackson. We hope you enjoy this, Gregory.

He-Man, AKA The New Adventures of He-Man was an animated series released by Jetlag Productions and Mattel in 1990. The series was developed as an expansion to the original Filmation series, He-Man and the Masters of the Universe, yet at the same time took the show in a whole different direction.

The premise involved He-Man being summoned from Eternia to the planet Primus to aid the Galactic Guardians in their quest to defend the citizens from the Evil Mutants of the neighboring planet Denebria. Rather than hang behind and pounce on the opportunity to take over Eternia in He-Man's absence, Skeletor instead chooses to follow He-Man, and leads the Evil Mutants in his new quest to conquer the entire galaxy.

While the quality of the show was highly regarded as superior to that of the original series, the characters were deemed so bland that most episodes failed to entertain viewers. These issues even carried over to fan favorites He-Man and Skeletor who acted so differently in terms of their tone and demeanor that the show had a sense of discontinuity.

Naturally the show was spearheaded by a massive toy production marketing plan. Depending on which region you lived in would dictate which figures you saw. Some were exclusively released in North America, while others were exclusive to Europe. Even those released in both regions sometimes saw a name change. To put it bluntly, tracking down an entire set of this line can be a rather big pain.

Though the animated series lasted only one season (65 episodes) in 1990, the toys were produced and released from 1989 to 1992. Unlike the show itself, the toys seemed rather popular among He-Man fans resulting in this much longer life. 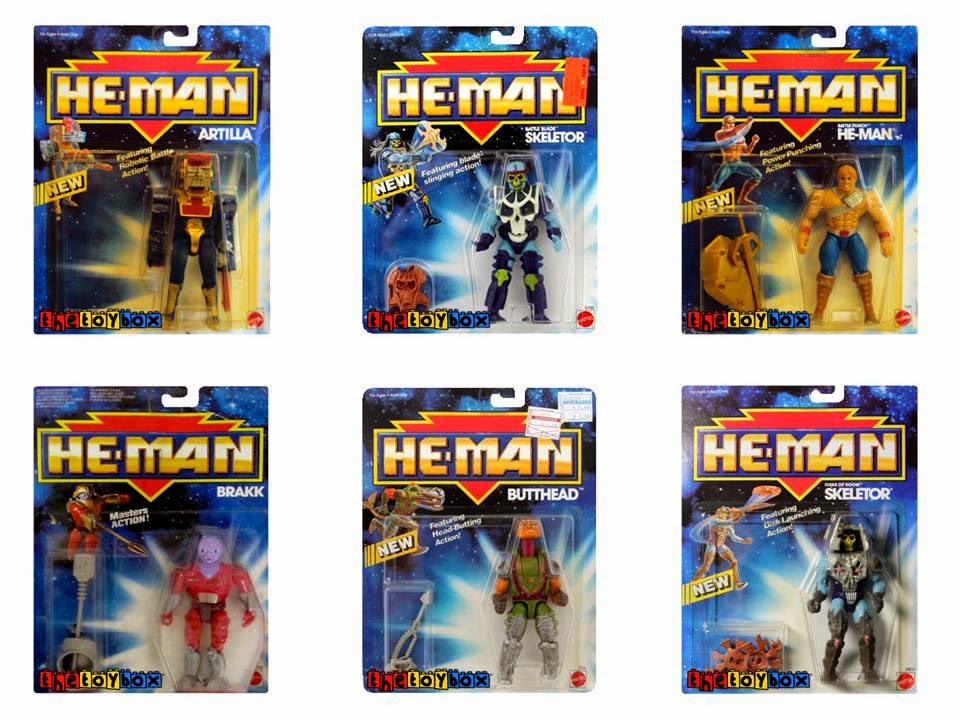 Hook Em' Brakk, known as Hook Em' Flogg in the USA, but never released as such in the States is going to be your most difficult and most expensive figure to track down. Loose figures will set you back between $100.00 and $200.00, while mint on card versions sell for $1,000.00 or more. 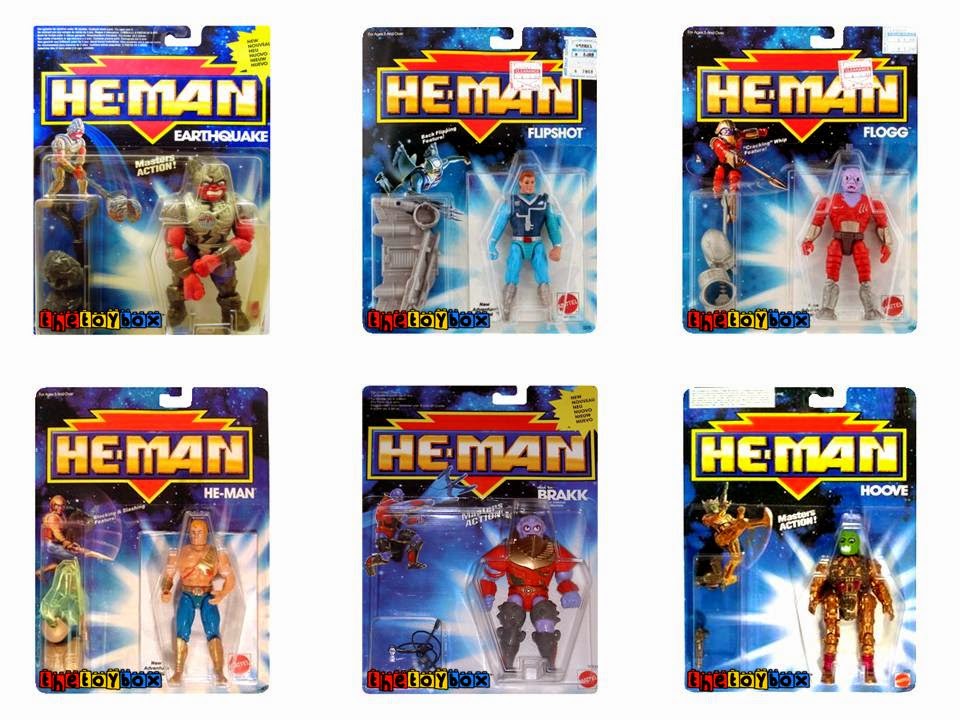 Fans of the toys refer to the Kalamarr figure below as Slush Head. Though the card does indeed refer to the character as Kalamarr, the name was changed to Slush Head for the Classic Masters of the Universe release of this figure. 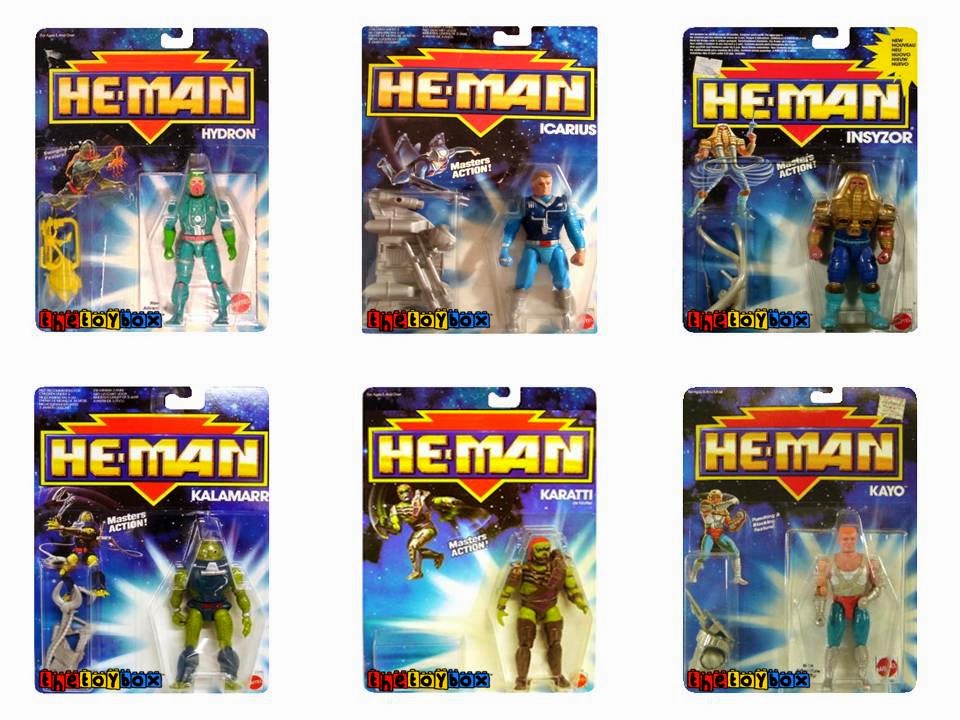 Quakke (below) and Earthquake (two photos above) are perfect examples of name changes between North America and Europe releases. Though they are both the same figure, they're known as two completely different names in each continent. European cards can always be denoted by the bilingual "explosion" bubble at the top right of the card. 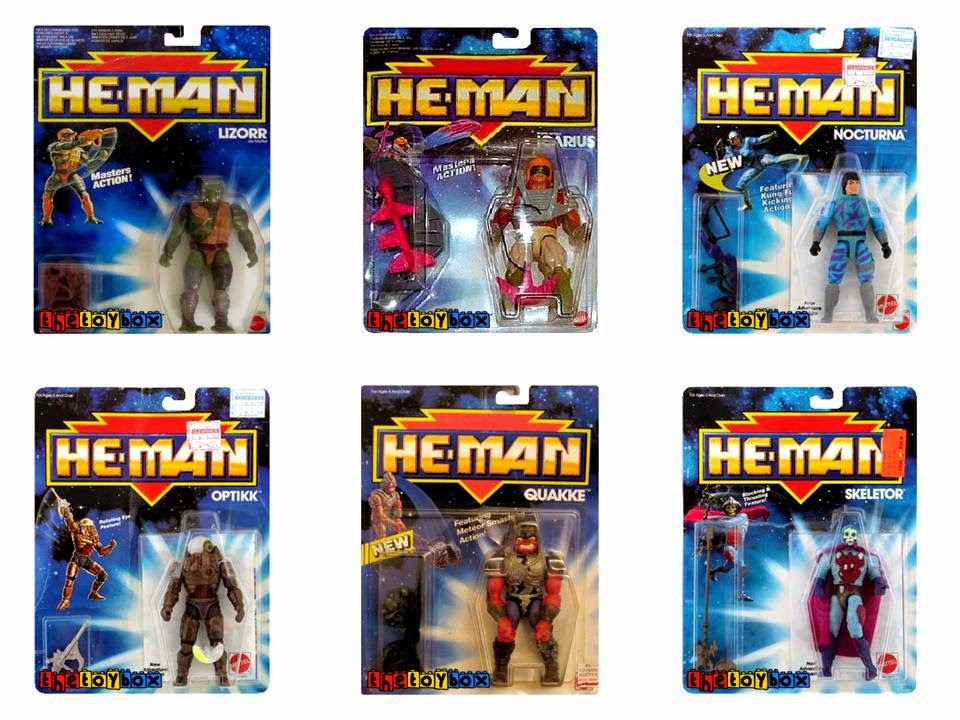 Thunder Punch He-Man was one of the very few "recycled" names/characters from the original series of toys for this line. 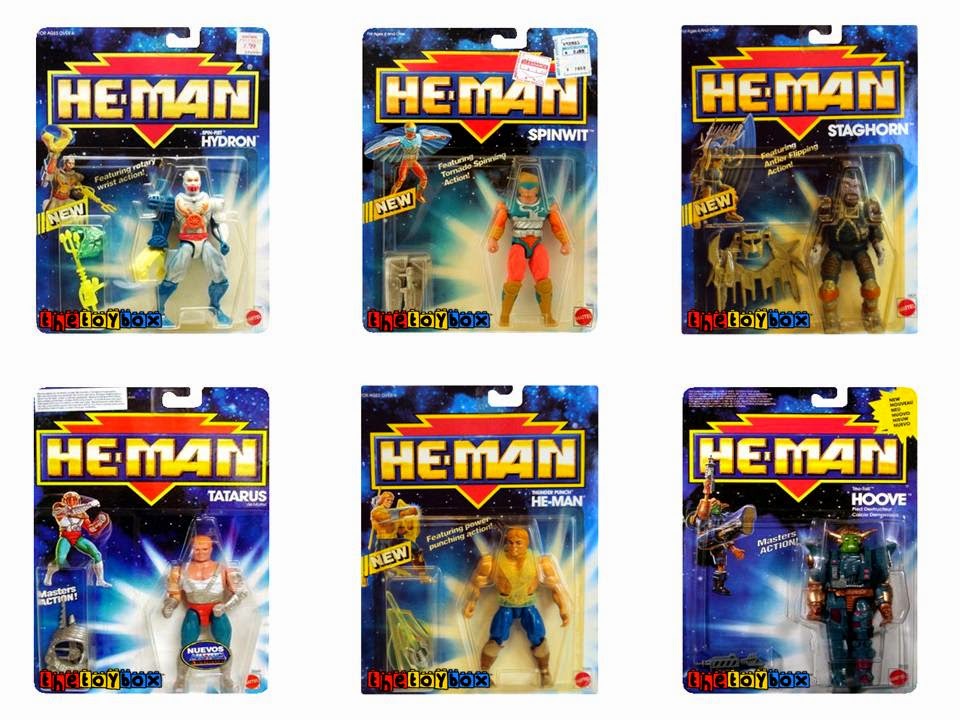 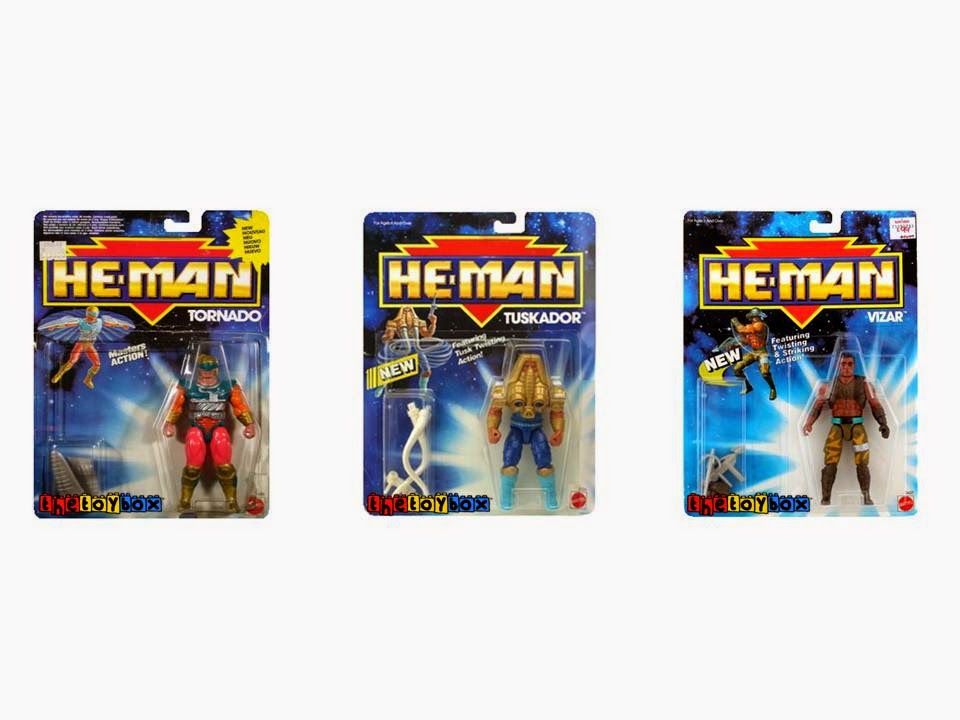 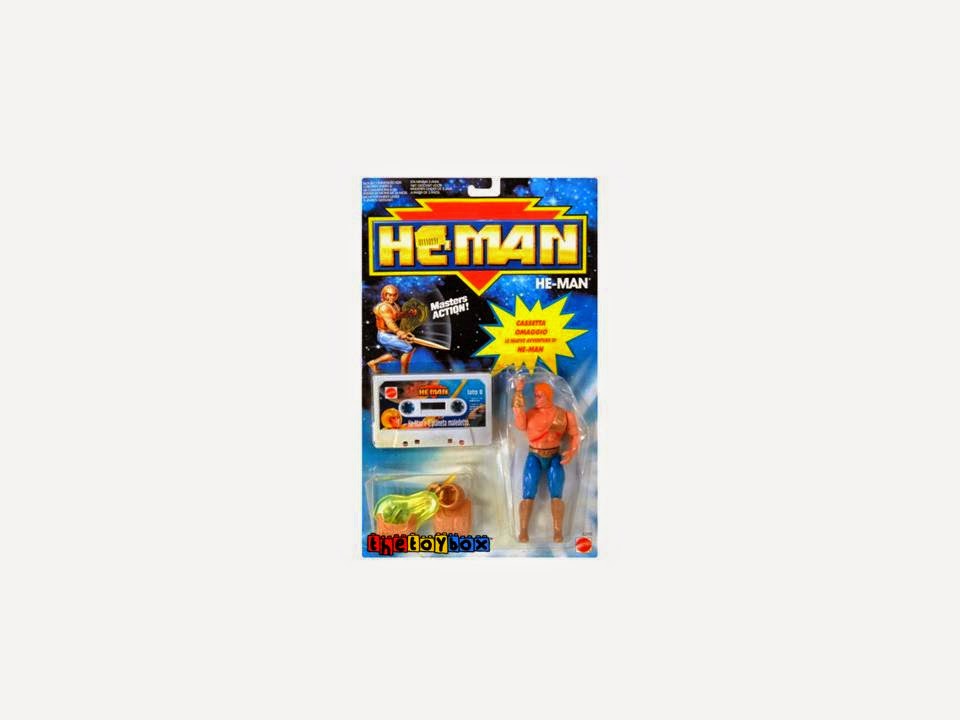 Mattel produced two backpack accessories which would fit on most of the figures. 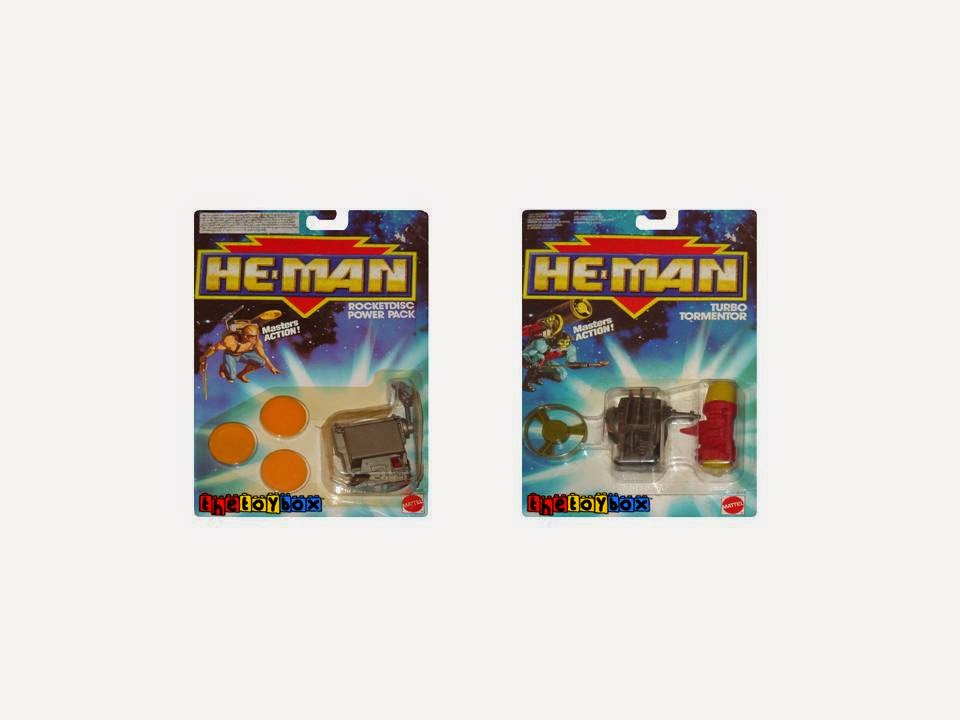 In addition to selling single packed figures, Mattel also produced a handful of multipacks. Each one boasted that it was a buy one get one free deal, however no matter which pack you purchased you were getting He-Man as he was packed in all of them. The villains were also only referred to as Evil Mutant, and not by their name. 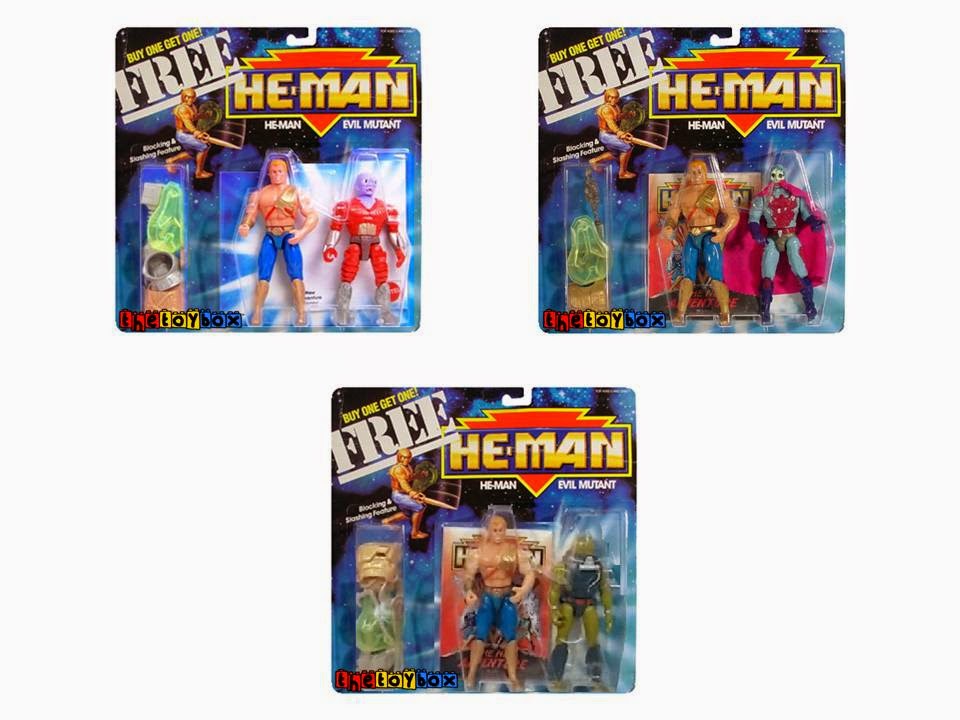 Vehicles and playsets were a big part of the series, and much like the figures could range in names depending on which region you lived.

Sagitar (below) is technically the one and only beast released in the series - Not a vehicle or playset. 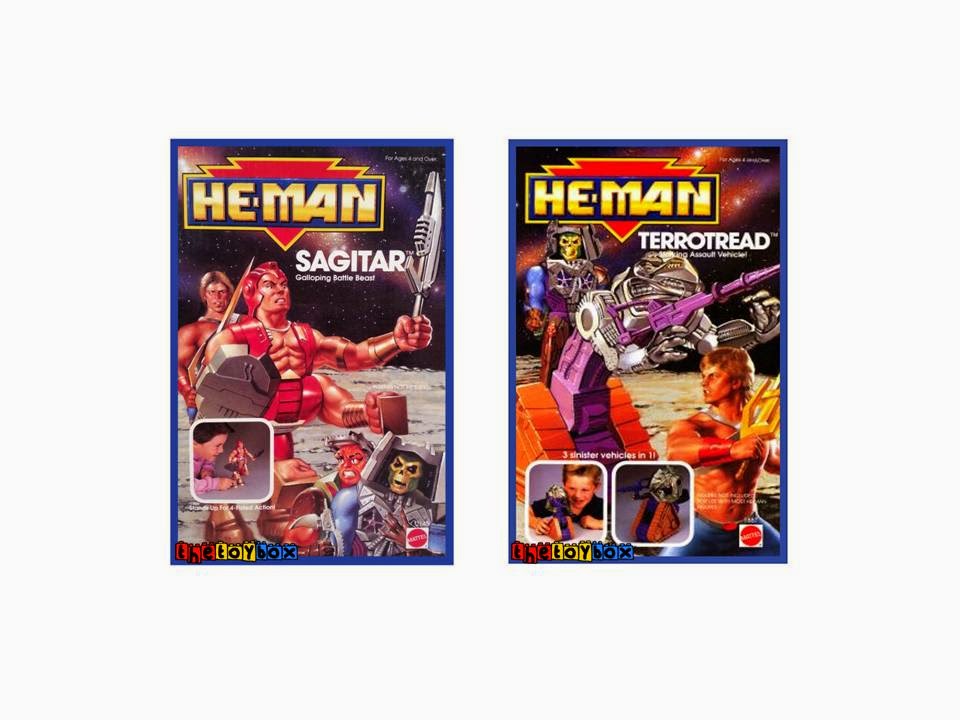 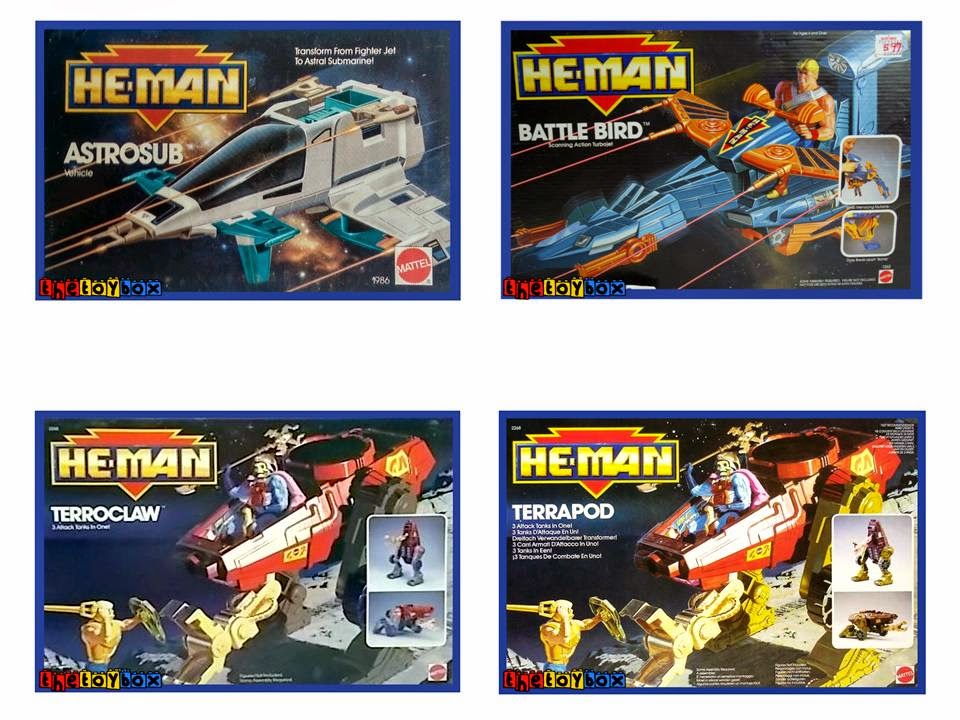 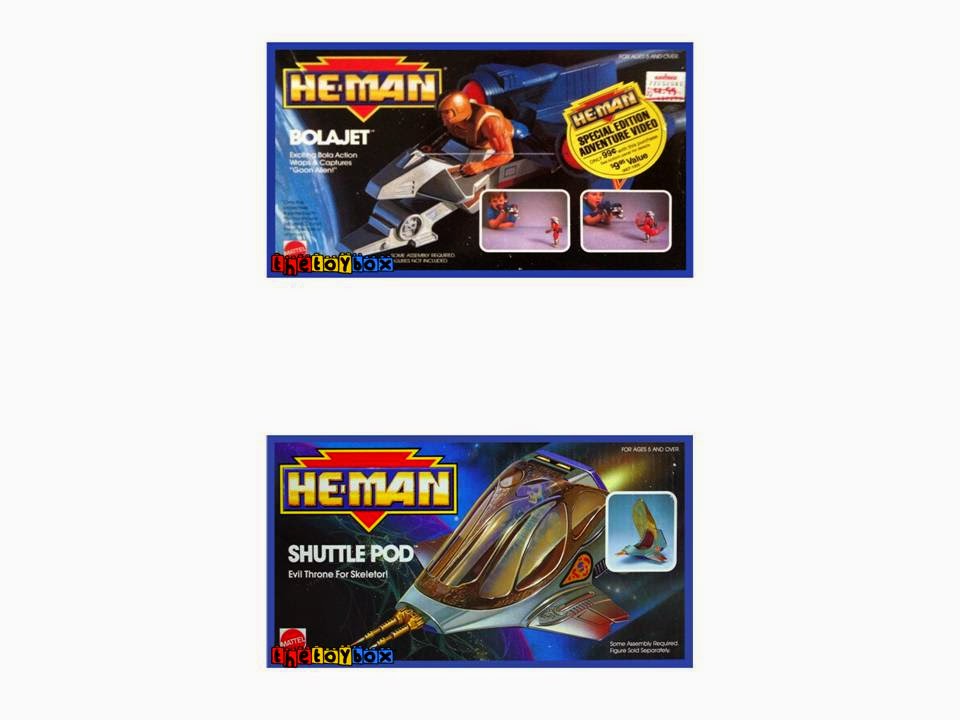 Another example of vehicles with name changes - Doomcopter (Norther America) and Skullcopter (Europe). 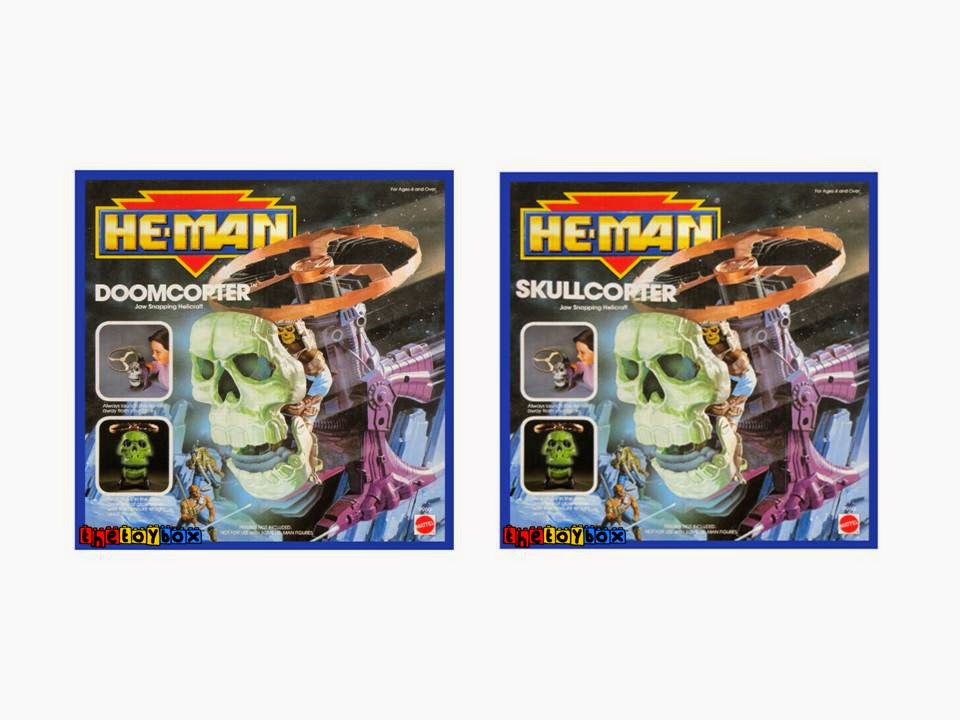 The massive Shuttle Eternia is large enough to not only blow kids minds away with the sheer size of the box/toy, but also all the fantastic play features built into it. The vehicle is boasted on the box as being able to, "Transform it 12 Different Ways!" 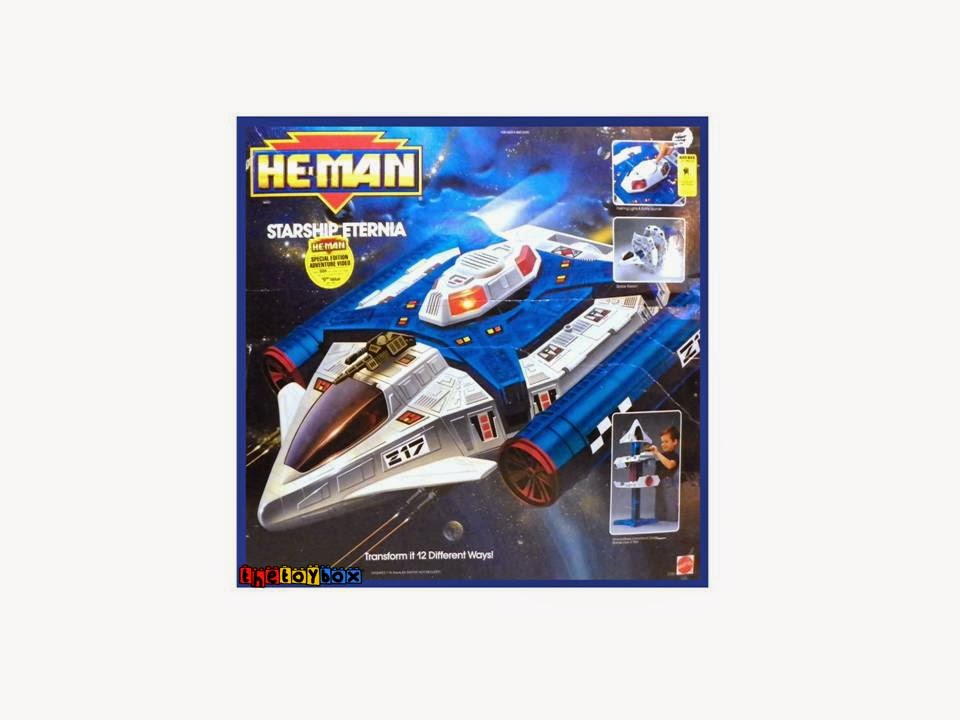 The last playset produced for the series was sadly a Europe exclusive. As such, many fans in the USA will have a difficult time getting their hands on one even today as prices range between $400.00 and $500.00 for ones sealed in the box. Loose ones can be found here an there for between $75.00 and $100.00) 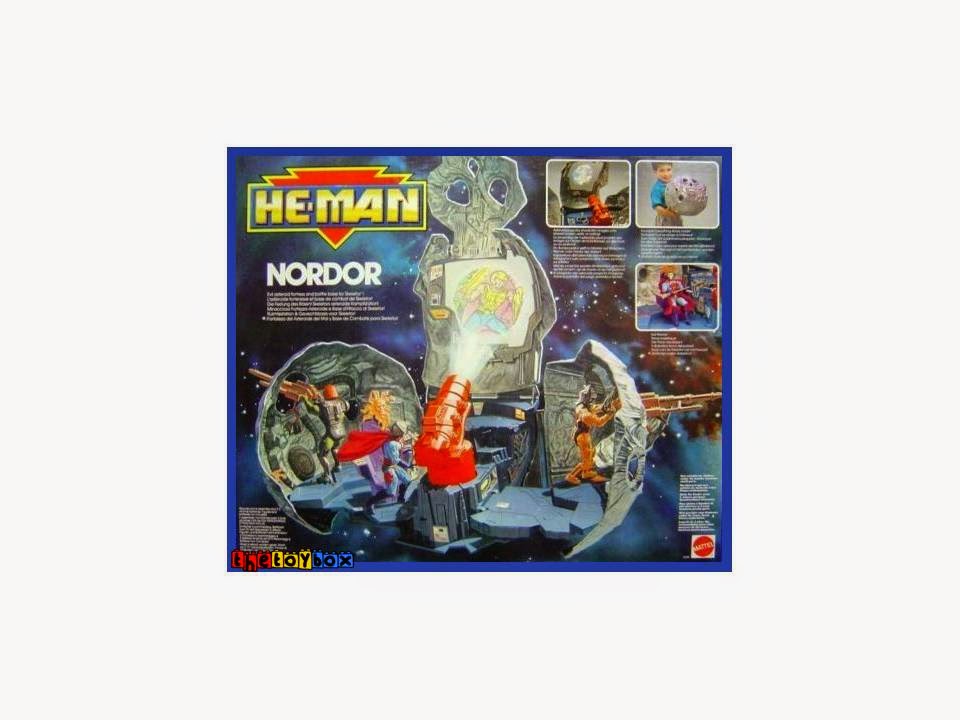 We have to be honest and admit that tracking down this series turned out to be more of a pain than fun, and as such we suspect many collectors out there feel our pain, and are quite possibly going through the same thing. Between the exclusives to various countries, and the name changes, this was a rather challenging post to compile.

Join us next time when we take a look at Batman - The Dark Knight Collection, and don't forget to add your entry for the first Bloggers United contest below for a chance to win a great mystery box of collectibles!


Click "HERE" to go back to the home page. For more posts related to this one, please click the labels below.
Posted by The Toy Box on February 26, 2015
Email ThisBlogThis!Share to TwitterShare to FacebookShare to Pinterest
Labels: 1980's, 1990's, Evil Mutants, Galactic Guardians, He-Man, Masters of the Universe, Mattel