Its impressive to say Scooby-Doo has been a mainstay on syndicate television since 1969 when the Mystery Inc. appeared in their first animated series, Scooby-Doo, Where Are You? Since then, the group has appeared in numerous re-visioned television series, full length animated films, quest appearances (our favorite being in Johnny Bravo), and live action / CGI films.

Though it doesn't technically say it anywhere on the package, these particular figures from Equity Toys are from the live action / CGI film released in 2002 staring Freddie Prinze Jr., Sarah Michelle Gellar, Matthew Lillard, and a couple other folks.

The line is fairly compact, and doesn't offer much beyond Shaggy, Scooby and a handful of "villains". Which is a shame considering many fans wanted to complete their collection of the entire "gang". You'll also notice that the two aforementioned characters produced weren't based on the film iterations, but rather the cartoon ones. 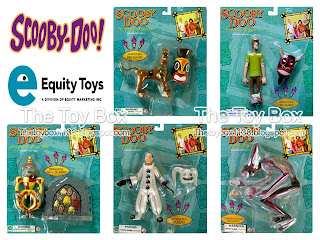 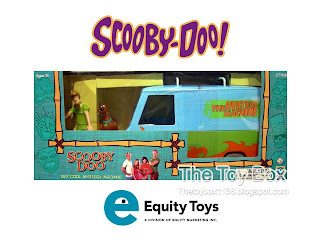 Mystery Machine with Scooby-Doo and Shaggy﻿

Several Scooby-Doo related toy lines have come and gone over the years since this line was released(as well as a handful of live action / CGI films - one of which was a direct sequel). It's a safe bet to assume even more will come in the near future as there's no doubt Scooby-Doo is a classic icon of pop culture.

Join us next time when we take a look at Demolition Man!

Click "HERE" to go back to the home page. For more posts related to this one, please click the labels below.
Posted by The Toy Box on March 21, 2013
Email ThisBlogThis!Share to TwitterShare to FacebookShare to Pinterest
Labels: 2000's, Equity Marketing Inc., Scooby-Doo, Scooby-Doo The Movie