Both Sylvester Stallone and Wesley Snipes were big names in the early 1990's, so it made perfect sense to "team them up" for the film Demolition Man. The premise of the film revolves around Stallone (the cop) chasing down Snipes (the criminal) in the present time. When things go wrong (we'll say that as to not ruin the plot for anyone), both men are convicted and sentenced to a prison of being cryogenically frozen.

Fast forward to the future where Snipes manages to escape, and Stallone is brought out of his status to go after him. Sprinkle in Denis Leary and a fairly unknown Sandra Bullock, a joke about seashells, explosions, violence and bunch of typical action film one liners, and you get the gist of what Demolition Man has to offer.

Mattel produced a line of toys to coincide with the film which found little success in toy isles. The majority of the toys comprised of versions of Phoenix and Spartan, and a couple vehicles. Coupled with the film really not being geared towards children, and the over saturation of the two characters could have been the driving force of toy line suffering as it did. The end result was the majority of items being shifted to clearance bins rather quickly. 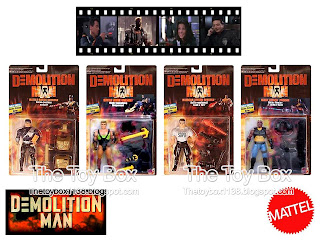 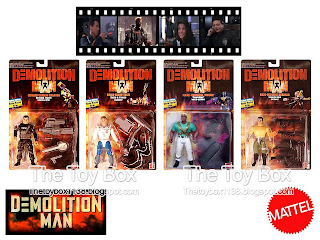 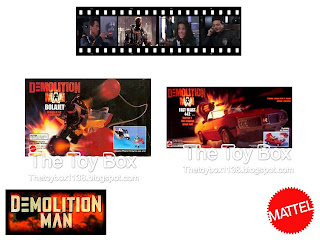 Join us next time when we take a look at Indiana Jones!

Click "HERE" to go back to the home page. For more posts related to this one, please click the labels below.
Posted by The Toy Box on March 25, 2013
Email ThisBlogThis!Share to TwitterShare to FacebookShare to Pinterest
Labels: 1990's, Demolition Man, Mattel, Sylvester Stallone, Wesley Snipes