The first Blade film was proof positive that when done with care that people would not only see comic book movies, but enjoy them. In a way, the 1998 film was what helped to usher in the likes of X-Men, Spider-Man, the Fantastic Four, then the Fantastic Four again (because clearly nobody got the memo on the first two stinking), which of course led to the Marvel phases we have with the Avengers universe.

Blade stared Wesley Snipes, and (one of our favorite's) Stephen Dorff. Fans of Gotham will also notice a very young Donal Logue (AKA Harvey Bullock). Adult film fans will also notice Traci Lords in the opening scene at the club.

Toy Biz produced the very small, but very awesome Blade figures seen below to coincide with the film's release. Unfortunately they were not as popular as the company's prior Marvel Universe line, and quickly got shuffled to clearance bins. 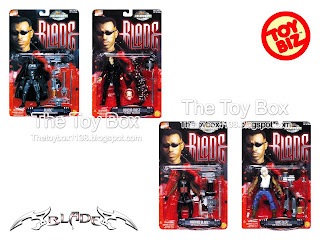 Though they're not too common, when found a complete set mint on the card can usually be obtained for $40.00 to $50.00. That's not too terrible of an asking price if you passed them up back in 98'.

Join us next time when we take a look at Barnyard Commandos!

Click "HERE" to go back to the home page. For more posts related to this one, please click the labels below.
Posted by The Toy Box on March 04, 2013
Email ThisBlogThis!Share to TwitterShare to FacebookShare to Pinterest
Labels: 1990's, Blade, Kris Kristofferson, Stephen Dorff, Toy Biz, Wesley Snipes