Believe it or not, since we first started this blog, we've always wanted to do a post on the Toy Story series, but the figures are so hard to get your hands on. Most people didn't collect these back in the day, but instead purchased them for kids. Mint in package toys are not only hard to find, but some people ask a pretty penny for them - Especially for the rarer ones.

Right, so, Toy Story. Everyone knows what it is, Pixar's 1995 breakthrough movie. Everyone has seen it. Everyone loves it - Great movie, great characters, and great voice acting. Like bread and butter, some movies and toys just go hand and hand, and toys there were. Between the three films, and various cartoons, Toy Story has spawned enough toys to create its own plastic army. 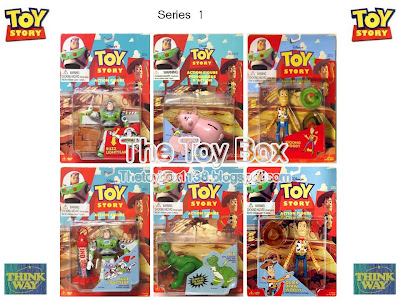 Think Way produced six figures for the initial series (and several other Toy Story related items). To be sure, 1995 was Toy Story's year. For Christmas and birthdays, that's all you saw. As an employee for Toy R' Us at the time, I remember vividly that we simply could not keep the shelves stocked with Buzz and Woody toys. We couldn't get them in stock as fast as they were selling. It was a Tickle Me Elmo type of nightmare of biblical proportions.

The figures were almost perfect counterparts to their big screen portrayals, and the packages were bright, and eye catching. A great combination if ever there was one for toys.

This didn't leave room for disappointment - Specifically in the ratio department. Because the line was strictly geared towards figures, characters like Rex and Ham showed no size variation when compared to the other figures. Simply put, they should have been larger - Much larger.

Despite this flaw, it clearly didn't hurt sales. 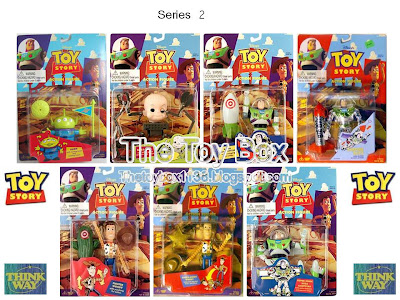 Seven more figures were quickly produced for series 2, and at this point it was clear that while secondary characters would be released here and there, Think Way was definitely pushing the variations of Buzz and Woody figures out to keep production costs low, and profit high. Between series one and two, there were no less than five variations of Buzz, and four of Woody - A trend that would continue to the series end.

It was an interesting play on Think Way's part to not release characters like Etch or Bo Peep, but instead went with the more terrifying to children, Baby Face (the spider like toy with a baby doll head). I can personally attest that in my time at Toys R' Us, this figure sold the least. 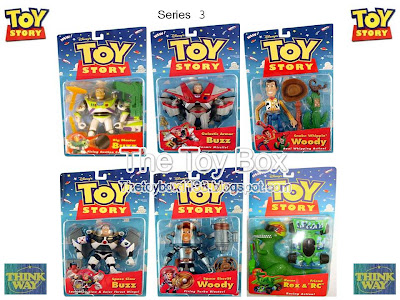 By series 3, Think Way was grasping at straws trying to get kids to remember that just the prior year they had dropped mountains of cash on Toy Story figures. Also known as "To Infinity and Beyond", series 3 was nothing more than repainted Buzz, Woody and Rex figures from prior releases. Now at a total of eight Buzz figures, seven Woody figures, and two Rex figures, it was no wonder that kids had lost interest.

Sales continued, but very slowly, and very poorly. The once hottest isle of the toy store was now a ghost town, with parents occasionally stopping by to purchase a figure or two (now on clearance) for a birthday party they completely forgot about.

Interesting about series 3 is that there are two package variations for each character, and in some cases, three. The reason the series is known as the "To Infinity and Beyond" series is because a package variation exists where this text is displayed across the top of the package. Other variations consist of rounder packaging, and a yellow label displaying the figures names as opposed to red.

For those interested in chasing down variants, there are also gold editions of the three Buzz figures from this series. 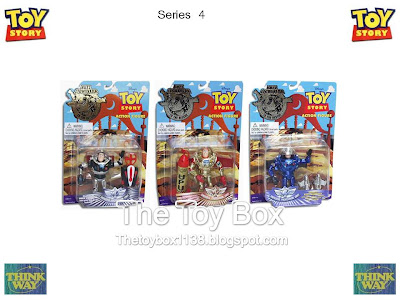 Series 4, Buzz Lightyear to the Rescue, or as I like to call it, Oh Good, More Buzz Figures was released as the final set of figures in the line. Sales were dead, and Think Way was making one final push to get children to bite.

In a half assed attempt, they released three more variations of Buzz Lightyear, now up to eleven different versions. Why? One couldn't even begin to guess.

The series officially died out shortly after these three figures were released, and Toy Story figures were a thing of the past until Toy Story 2 hit the big screen. But for that, you're going to have to wait for a later dated post.