Whether you admit it or not, at one point or another, you liked Michael Jackson. Everyone did. It was like a strictly enforced law around the world.

Because the entire world liked Michael Jackson, in 1984 LJN thought it would be a brilliant idea to make some money off of that, and thus the Michael Jackson 12 inch doll collection was born, and Michael-Mania spread even further as a result.

The series was kept small, and focused on the era that made Michael a household name across the world - "The Thriller Era". During this time, Michael was selling millions upon millions of Thriller albums, and swept up an incredible eight Grammy Awards as a result. To say that Michael Jackson was at the height of his career would be as obvious as to state that lava pouring from a volcano is hot. The man was number one across the world. 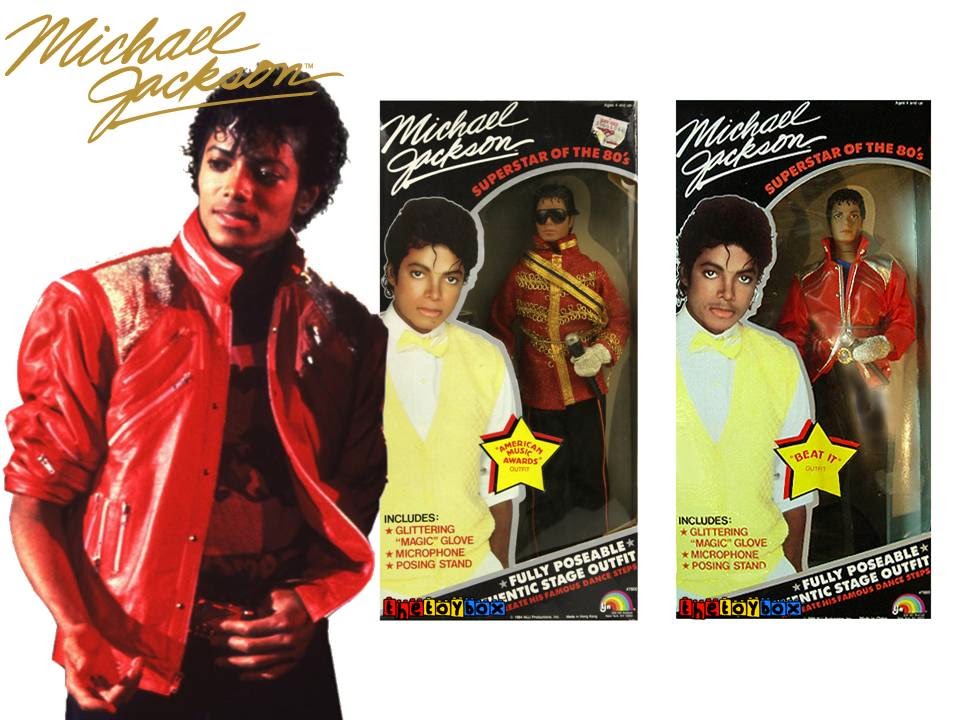 LJN produced four dolls, all Michael (obviously), all with different clothing, yet the same accessories. Each outfit was meticulously crafted to resemble the Gloved Ones personal ensemble to a "T", right down to his glittering socks, and black shoes.

Each figure came with a Glittering "Magic" Glove (not sure what made it magical), a microphone, and a stand. Two of the four dolls (Thriller, and American Music Awards) came with sunglasses.

The four dolls respectively came to be known and named by their clothing, "Beat It", "Thriller", "American Music Awards", and "Grammy Awards." After all, how else would you be able to identify the same doll over and over? 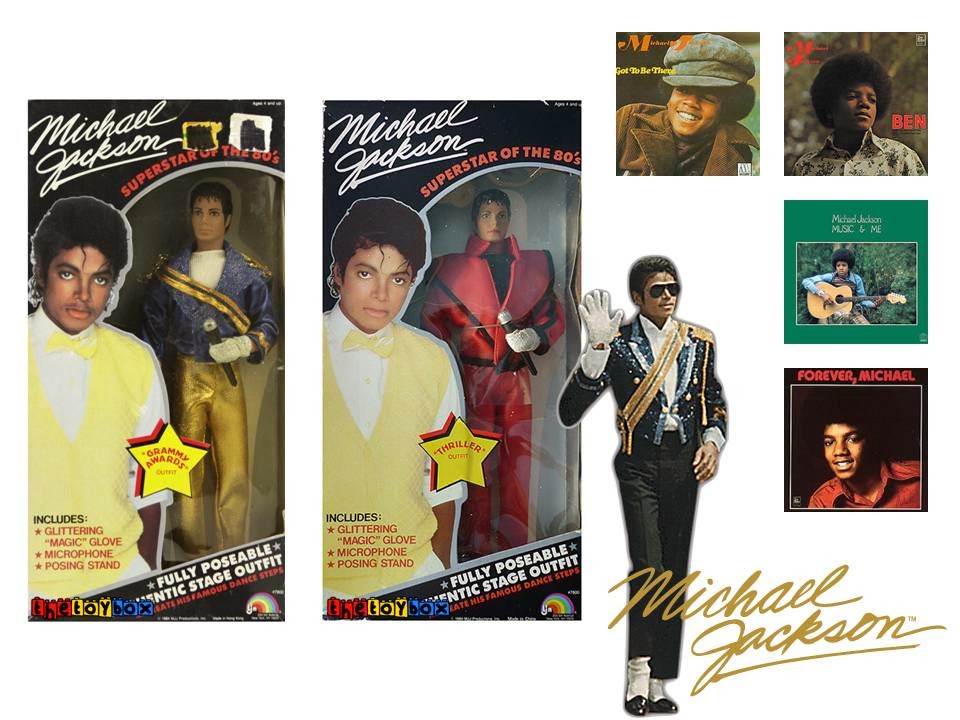 The packaging design was pretty standard for dolls in the 80's. A rectangle box with a clear plastic area to showcase the figure, with a tight shot photograph (or artist rendition) of the character inside. In this case, a photo of Michael to the left. The name "Michael Jackson" was printed in cursive at the top, perhaps to appear as though it were his actual signature.

While some versions of the doll dressed in the "Billie Jean" outfit have been found on EBay, or other various secondary markets, these dolls are not authentic if they are in the package. While a set of clothing was released for the "Billie Jean" look, there was never a doll packaged with the clothing. 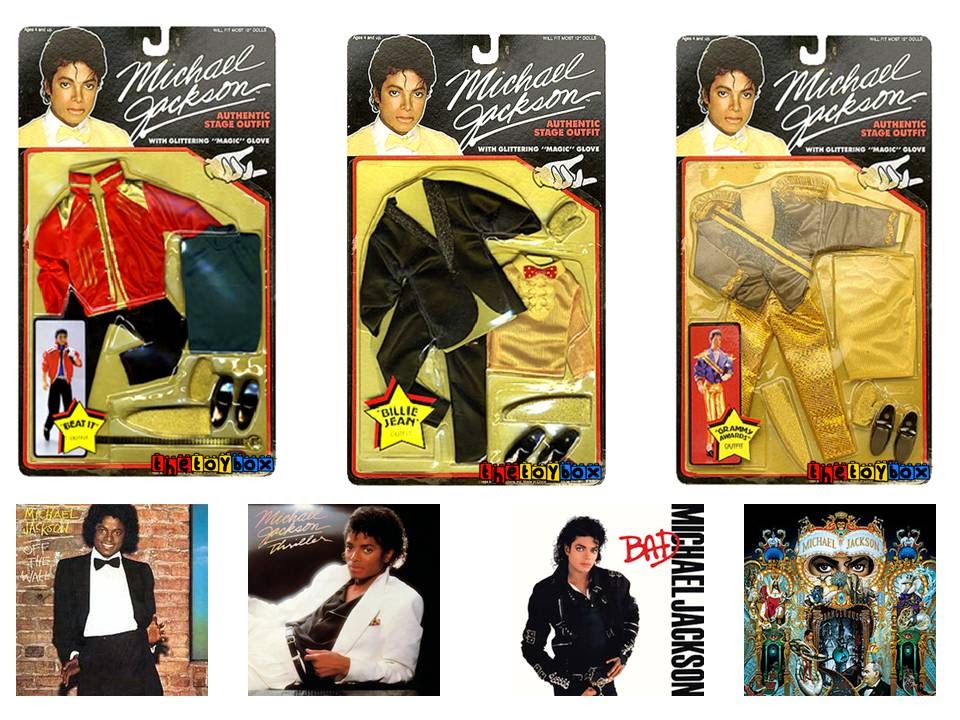 To help Michael stay trendy, a total of six outfits were produced to compliment the line. A respectful tactic that LJN followed was to offer each outfit also available with a doll separately. This helped parents and children not have to buy multiple dolls to get the different outfits.

The six outfits made available were; Thriller, Beat It, Grammy Awards, American Music Awards, Billie Jean, and Human Nature. To date, Human Nature remains the rarest, and most expensive outfit to add to your personal collection.

The packaging for the clothing was also very standard for doll accessories of that time - A large plastic bubble, with each item inside clearly laid out. A small star with the outfit name was to the bottom left of the package. Again, Michael's signature was displayed at the top, with a photo from his neck up. 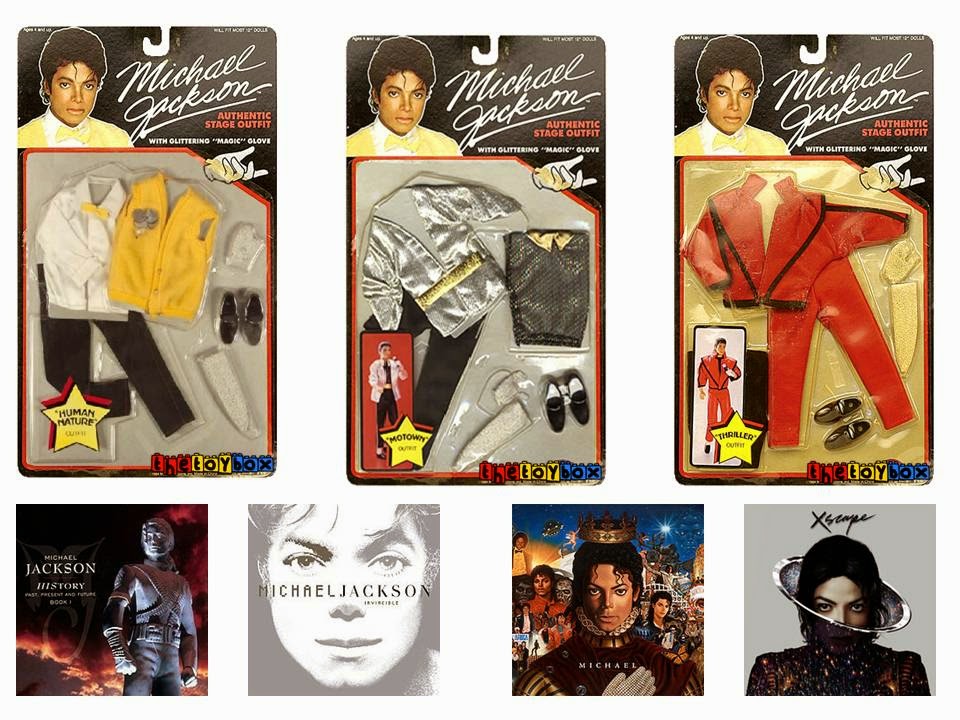 When it comes to this particular line of dolls, people see "Michael Jackson", and assume that since he is deceased, they're sitting on a gold mine. Unfortunately this is not the case, and it would be incredibly helpful if these particular people would do their research prior to listing their items for sale for outrageous amounts.

When you think of toys, you don't often think of music artists. You think movies, cartoons, and possibly even comic books. So to see a Michael Jackson doll (and let alone in the 80's) was a rare treat for fans and collectors. To this day it's not like you can walk into your local toy shop and ask the clerk where the Pearl Jam or Matchbox 20 figures are. They'd probably in turn ask you, "Do they even make those?" Which of course the answer is, "No, they don't."

Do you see what I'm getting at here? To be a singer (in any era), and be given the opportunity to be a toy was, and is a rare honor. If anyone deserved it, surely it was the King of Pop, Mr. Michael Jackson.

What a fascinating collection, with absolute attention to detail. R.I.P., Michael Jackson. Your music and collectibles will be around forever to remind us of the great music you gave this world.

Click "HERE" to go back to the home page. For more posts related to this one, please click the labels below.
Posted by OK Records 1138 on October 03, 2011
Email ThisBlogThis!Share to TwitterShare to FacebookShare to Pinterest
Labels: 1980's, Beat It, Billie Jean, King of Pop, LJN, Michael Jackson, Thriller