The year was 2000. Married...With Children had been off the air for three years. Buzz around the series had all but died down. TV shows had yet to test the waters of mass release on DVD format, and people weren't clambering over each other to get their hands on their favorite shows of yesteryear.

So, it was an odd play that Figures Toy Company would license the rights to create a line of toys based on the hugely successful show under the guise "Classic TV Toys". Not only were they simply too late to capitalize on the popularity of the show, but being a small company with little following, they weren't set up to market and produce the quantities that companies such as Hasbro or Mattel could push out. Regardless, the company pushed forward. 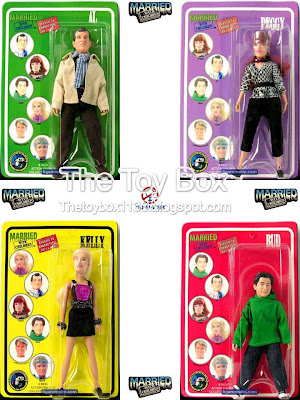 The first series of eight inch figures (or dolls, if you will) consisted of the entire Bundy clan, with the exception of Buck the dog, and the very short lived Six (the semi-adopted or better stated as abandoned young child added to the Bundy family in hopes to boost ratings of the show).

The figures were poorly sculpted, and resembled knock off Barbie dolls with little articulation. The heads were too large, and only with the stretch of ones imagination could you find any resemblance to the actual characters of the show.

The packages were generic packaging at its best, made as either an homage to older Mego toys, or simply because their art department was awful. The color schemes and poorly laid out design were enough to make any serious collector shudder.

Interesting enough was that the figures based off of the two Bundy children, Kelly and Bud, were of their younger selves, and not as seen in the final season of the show. This was especially odd as the second series would go on to produce Jefferson D'Arcy, a character not even introduced into the show until season five. 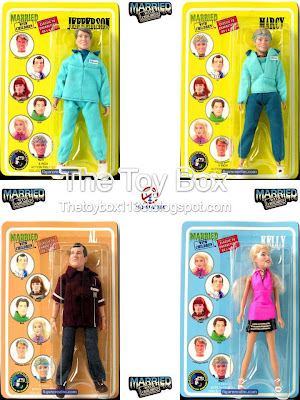 It's unknown to the general public if series 2 was a preplanned release or not. I say this because not only was it released right on the heels of series 1, but for how quickly the series disappeared after this, it couldn't have sold that well.

Much like the first series, the second showed little resemblance to the characters, and the same awful package design remained. Rather than produce four new figures, Figures Toy Company only released two new characters, Jefferson and Marcy D'Arcy, and two redressed prior ones, Kelly and Al. Personally, I'm not sure why they didn't go with Griff and Steve Rhodes as opposed to going this route, but it probably all came down to licensing costs versus profit, and the fact that it was simpler and cheaper to produce new clothes than new dolls.

The series ended abruptly after the release of series 2, and can still be found on the secondary market for incredibly cheap. Whole sets (minus the exclusive ones) have sold for as little as $50.00 mint in the package. 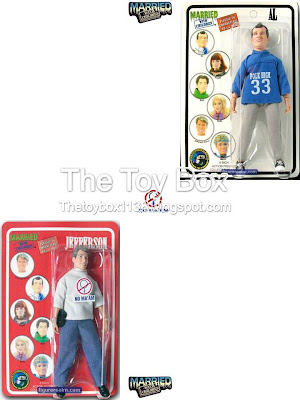 During the first and second series, Figures Toy Company offered two exclusive figures (via Classic TV Toys dot com) - Or rather, two new sets of clothing on two older characters - Jefferson with his "No Ma'Am" shirt, and Al sporting his classic Polk High uniform. Much like series 1 and 2, they didn't sell well.

I can't help but think that this series missed its opportunity. Honestly, I didn't even know it existed until just recently, and I was, and still am a huge fan of the show. Had it been released during the shows height of popularity, with a little more marketing, this could have been a larger and better series of toys. Who knows, possibly with playsets such as the Bundy's home, and vehicles like the Bundy's faithful Dodge?