The Real Ghostbusters? As opposed to the fake ones? Well, yeah - Actually that was the case.

When Ghostbusters was being developed for a cartoon series, Filmation (most famous for He-Man and She-Ra) filed a lawsuit against Columbia Pictures Television due to an infringement of the name. As it was, Filmation had already owned the rights to the TV series name "Ghostbusters" which was a 1970's program the company had developed as a live action series, and later in the 80's as a cartoon series of its own. To get around this, the series was titled The Real Ghostbusters. This not only settled the suit, but let Filmation know that there was only one Ghostbusters, and Columbia's was it.

The first film was already a major success in theaters, so when it came time to produce a cartoon series (1986), Kenner was quick to develop toys. The line launched in 1987, and ran until 1991.

While the figures stayed generally the same (after all, there are only four Ghostbusters), Kenner released several variations throughout the line. Kenner took several liberties with likeness and articulation.

The first series contained the four original Ghostbusters. Each Buster came packed in with their own ghost. This trend of a figure being released with a unique ghost would continue for the entire line. 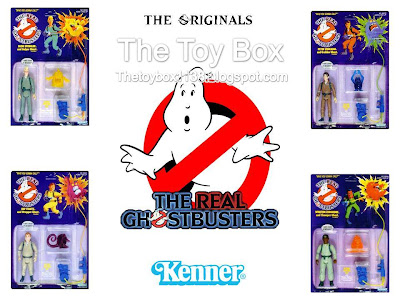 In 1988 Kenner released the Fright Features figures series. This set included the four Ghostbusters, and their trusty secretary Janine. The Fright Feature toys can only be described as having Tex Avery Syndrome. With the squeeze of their arms and/or legs, each figure would bulge out various body parts such as eyes and tongues. 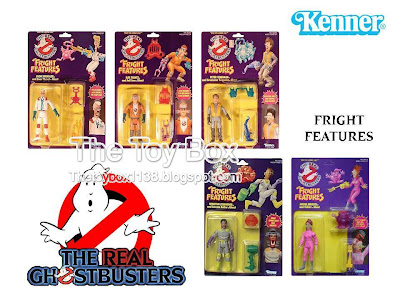 Kenner followed the Fright Features series with their 1990 Power Pack figures line. By the time this series came out, Ghostbusters 2 was a huge success at the box office. The line incorporated a Louis Tully figure into the mix along with the four main characters and Janine.

Power Pack figures were essentially figures packaged with large power packs. Each figure had their own unique pack. 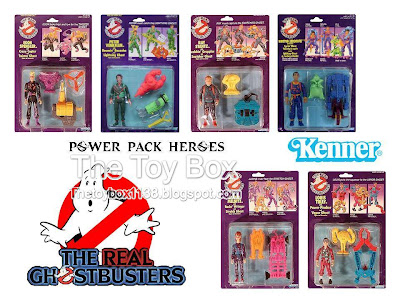 Screaming Heroes, which also launched in 1989, were figures that would scream. To make this work one would only need attach the packed in ghost to the back of the figure, and squeeze to push air through them. This line did not include a Louis figure, but still had all four Ghostbusters and their secretary. 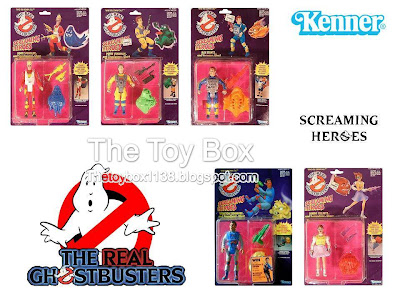 This set would once again exclude Louis, and only include the four Ghostbusters and Janine. 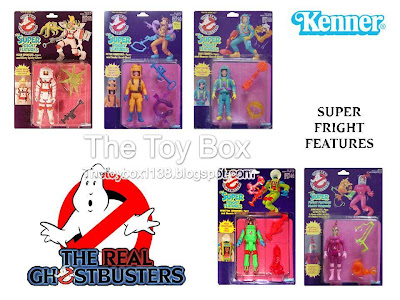 1990 saw only one line of figures released - the Slimed Heroes. The line included all four Ghostbusters and once again Louis. The way the figures work was that if you doused them with warm water, it would reveal thermal painted slime on the figure. The addition of cold water would make the markings disappear again. 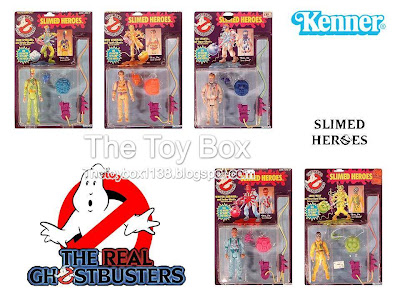 1991 was the last year the series ran, and with it came the final wave of Ghostbusters figures - Ecto Glow Heroes. The set included all four of the busters and Louis. Each figure glowed in the dark. 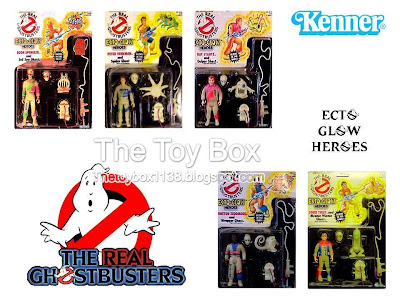 One particular line Kenner introduced for the series was figures based on classic horror monsters. This set included the likes of Dracula, Frankenstein and The Mummy. The figures while mildly successful never managed to capture the spirit and fun of what Ghostbusters were. 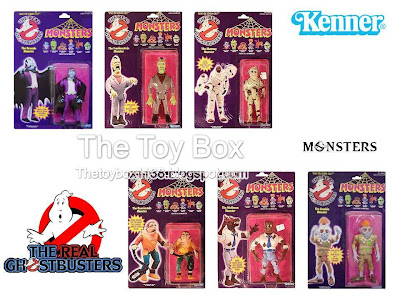 Kenner was given artistic license with the figures, and took that liberty as far as they could go with the line - Especially when it came to the ghosts.

Interestingly enough when the figure based off of the now known as Slimer character, there was no actual name associated with him. When produced as a toy, he was released as simply Green Ghost.

Though Kenner produced several ghost characters, Green Ghost and Stay-Puft Marshmallow Man are the only two recognized as being from the films and/or cartoon series. The first series of Action Ghosts were released in 1987. 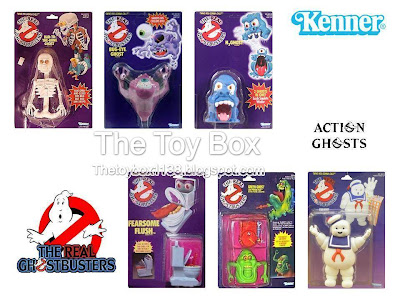 A second wave was produced in 1988 which incorporated more play into the Action Ghosts. Specifically, one you would put your fingers through and manipulate it like finger puppets. The other included a zip line which would rev the toy up and send it off in a (somewhat) straight path. 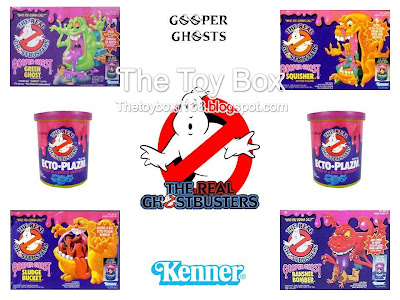 Mini Ghosts were a way for Kenner to incorporate small multipacks of ghosts into the line. They even included mini Gooper Ghosts (see next section below) with a smaller can of Ecto-Plazm. 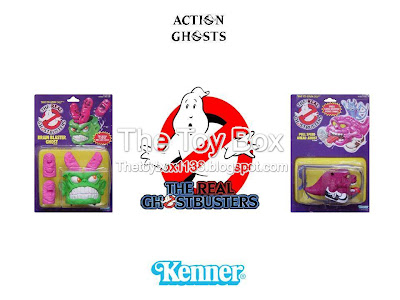 In the 80's you simply didn't have a toy line if it didn't include some form of slimy goop. The mixture typically stunk, got hard within hours if left without the lid on it, was obnoxiously messy, and was impossible to fully recover for multiple use.

The Gooper Ghost toys served as the vehicle for said slime. Much like the slime from the He-Man series, the Ecto-Plazm was poured down the top of the toy where it would ooze onto the figure below. There were four ghosts created for this line. 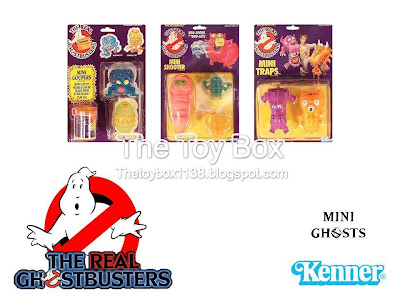 Gobblin' Goblins were like mini playsets. Each set contained one large ghost that had chomping action to gobble your heroes up. There were three released in total. 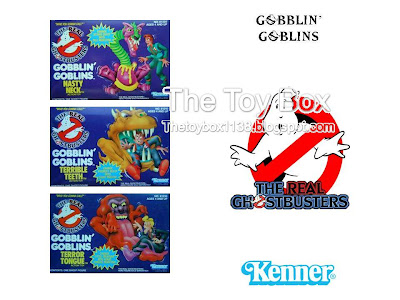 One of the most popular line of figures produced for the series were Haunted Humans. Each figure was designed to look like your average human such as a mail man, police officer and old granny. When manipulated correctly, the figure would transform to show a ghoulish like character. 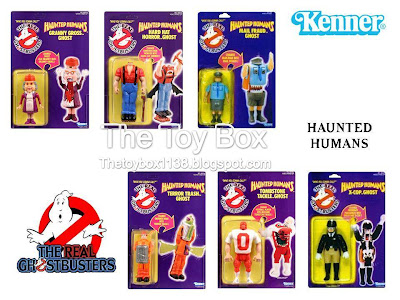 The most highly coveted piece in the entire series is the Fire House playset. Even opened with missing pieces this item can fetch as much as $100.00 on the secondary market, with prices multiplying by four or five times that for brand new, mint in box ones. 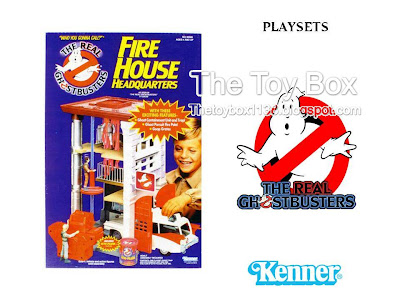 Several vehicles were produced throughout the line, though most of them were just a reimaging of the original Ecto-1 vehicle, with a different number scheme incorporated into the title. As the line progressed, the vehicles went further and further over the top until they became down right silly. 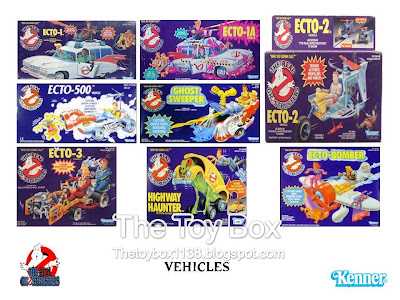 Towards the end of the series Kenner produced two Haunted Vehicles. Much like the Haunted Humans line, these toys could be manipulated to transform into a ghoul. 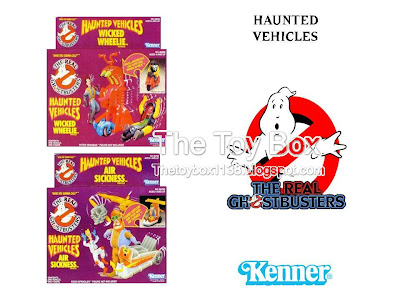 In a world where most toy lines are lucky to see a one year anniversary, The Real Ghostbusters defied those odds by lasting an impressive five.

Most of the toys are relatively fairly priced on the secondary market, while the rarer original series, Fire House playset, Green Ghost and Stay-Puft Marshmallow Man command a larger value. What makes this series fun to collect is that while it is cheaper than most toy lines out there, it's a lot rarer. Collecting a full mint on card/in box set can take many years to track down all the pieces.

Click "HERE" to go back to the home page. For more posts related to this one, please click the labels below.
Posted by OK Records 1138 on October 10, 2011
Email ThisBlogThis!Share to TwitterShare to FacebookShare to Pinterest
Labels: 1980's, Ghostbusters, Kenner, The Real Ghostbusters