Tales from the Cryptkeeper (Ace Novelty)

Happy Halloween, readers! What better way to celebrate than to bring you a post about monsters! Today is a treat for all of you. You get not one, not two, but THREE posts on toys pertaining to spookiness. So keep reading past this post for the other two!

Tales from the Cryptkeeper was a cartoon series which aired on ABC, based off of HBO's highly popular Tales from the Crypt live action series. The series was developed and produced by Nelvana Limited, PeaceArch Entertainment, kaBOOM! Entertainment and Warner Bros. Television Animation, and lasted for two seasons between 1993 and 1994. The series was significantly milder than the live-action series, and followed more of a Scooby Doo theme from episode to episode. 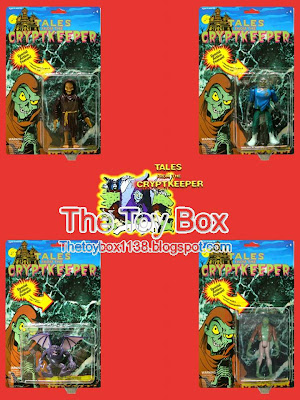 In 1994, Ace Novelty produced a small toy line based on the series which lasted for eight figures, or two series of four figures each. The production was low, as was the quality.

With the exception of the Cryptkeeper, the names of the characters as well as the sculpts were nothing creative, and seemed more like an excuse to cash in on the series - Though between the cartoon and toys, the series never garnered a strong following.

Sadly, the most catching thing to the figures was the bright packaging. With a colorful combination of blue, green, and even the brown, it was easy to spot these figures on any toy isle shelf. However, that didn't necessarily mean that people were buying the toys, and they eventually ended up in the clearance bins of most stores. 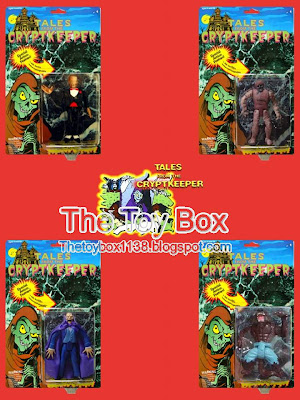 The full series consists of the following figures;

Crypt Keeper (Tuxedo)
The Mummy
The Vampire
The Werewolf

Crypt Keeper (Robe)
The Frankenstein
The Gargoyle
The Zombie

Despite many secondary market dealers attempts to sell these figures, most go un-purchased. Each figure can readily be found mint on card ranging from $5.00 to $10.00, with whole lots going from $25.00 to $50.00 depending on whether or not people are actually looking for them at the time...Most people are not. This is probably due a lot in part to most people simply not knowing these toys even exist. 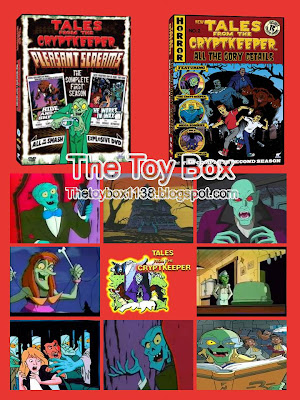 In 1997 the series was picked up again, and aired as The New Tales from the Cryptkeeper with an all new animation style. This reimaging of the series didn't last long either.

In 2007, kaBOOM! Entertainment of Toronto, Canada, released the complete 1993/1994 series on DVD. The series is still readily available on sites such as Amazon for a mere $9.99 per set.

While it wasn't the most interesting series of toys to date, it remains an iconic one. It was also a prime example of how independent toy companies were starting to carve out little niches in the toy isle. Although most of them failed and folded, it was a sign of things to come with fly by night toy companies, and random figures - (most destined for the clearance bin) which dominate a good section of toy isles today.