Our third and final post for the day brings you all kinds of monsters...

Aaahh!! Real Monsters! The title says it all. The cartoon series launched on Nickelodeon right before Halloween in 1994, and ran through the end of the year of 1997. The show was based on the adventures of child monsters in training, focusing mainly on the three characters Ickis, Oblina and Krumm. The majority of the episodes focused on the characters making their way to the surface to perform scares for class assignments. 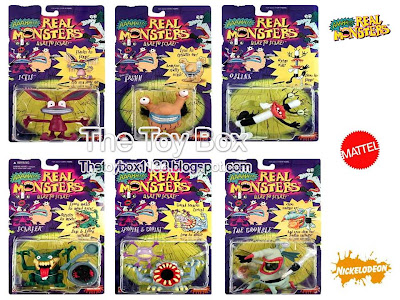 In 1995 Mattel produced a small line of figures based on the series. Though the show had a strong following of fans, it never really took off as a staple in children's entertainment, and as a result the figures saw little success on the market.

It didn't help that Mattel never really seemed to support the line. Advertising was spars, and despite the many options available for playsets, this avenue was never pursued. 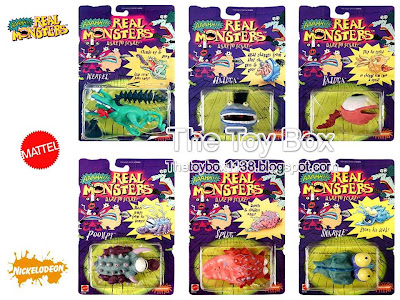 After just two waves of figures (series one being known as the basic figures, and series two being known as the Inside Out figures), the line was cancelled - Though the fact of the matter was that many fans didn't even notice that the toy line had come, let alone gone.

The figures can be found on the secondary market for as little as $4.00 - $5.00 mint on card. Though there are a fair amount of dealers out there who think these toys are worth three to four times that price (each), and as a result of pricing as such, they remain unsold.

For those few people out there looking to track these figures down they are as follows;