I feel like Ozzy Osbourne's The Ultimate Sin doesn't get the love it deserves in his overall catalog of music. I remember it always being the most difficult one to find in his entire discography. As if nobody wanted to stock it because it didn't have any of his "hits" on it - Which could actually explain why I like it so much. 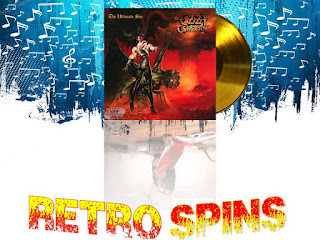 The Ultimate Sin doesn't suffer from being overplayed. Well, unless you take into consideration how many times I blared it. I love this album, from start to finish. It's one of the very few I'd pick up on vinyl if I came across it. For those of you who don't know what I'm getting at with that statement, I'll explain. I only buy albums on vinyl that I know I'll listen to from start to finish - Because skipping songs on a record is a pain to do. It's because of this that I actually have very few albums on vinyl.

Out of all the tracks, Shot In The Dark was the only song to touch the charts, and it didn't do very well. In March of '86 it debut at number ninety-five, and then disappeared the following week. There were no other songs from the album which charted, and it eventually faded away into obscurity.

This is odd, because at the time of its release, The Ultimate Sin was actually the highest charting album of Osbourne's career. However, many contribute this to the surge in popularity of metal albums during this particular time of the 80's. It was, after all, the year of Metallica's Master Of Puppets, Megadeth's Peace Sells But Who's Buying, Queensryche's Rage For Order, Europe's The Final Countdown, Cinderella's Night Songs, Van Halen's 5150, Poison's Look What The Cat Dragged In and Bon Jovi's Slippery When Wet. I know, many of those wouldn't constitute as metal these days, but they did back then.

I could sit here and tell you what my favorite tracks are from the album, but like I've said already, I like the entire album. As such, that would be a bit futile, and a waste of everyone's time. Suffice to say, you should check this one out.

Click "HERE" to go back to the home page. For more posts related to this one, please click the labels below.
Posted by The Toy Box on May 17, 2022
Email ThisBlogThis!Share to TwitterShare to FacebookShare to Pinterest
Labels: 1986, 80's Album Review, 80's Music, 80's Music Review, Music of the 80's, Ozzy Osbourne, Retro Spins, The Ultimate Sin