I've always felt like "Weird Al" shines the most when he's not focused on parodying hits of the day, but rather, writing his own creations. I think it's because of this that I'm drawn to Dare To Be Stupid. On this album, you get parodies of styles of music, but not necessarily blatant "rip offs" of others music. 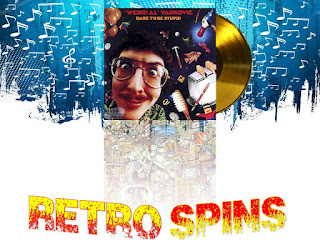 Take for example the title track itself, Dare To Be Stupid. It's clearly a poke at the styling of Devo, yet it's Al in his own realm, writing whatever he feels like singing. He gets to take the gloves off and be as silly as he wants to be and it works. While it's not on this album, you also get a sense of this in, You Make Me, from 1988's Even Worse. This song parodies the style of one of my all time favorite bands, Oingo Boingo. Again, Al gets to be silly, and because the style is so obvious who he's parodying, it works.

With that said, this album does have one of my all time favorite parodies from the guy, Girls Just Wanna Have Lunch. I don't know what it is about the underarm fart noise interlude, but it cracks me up even to this day. Hey, I guess I'm never going to grow up. What can I do?

It's interesting that Ray Parker Jr. faced a lawsuit from Huey Lewis for "borrowing" the riff to I Want A New Drug for his Ghostbusters theme. Yet Al can make a song called, I Want A New Duck, completely stealing the song from start to finish, but changing the words, and nobody says boo. Hypocrites! I'm joking. Just stirring the proverbial pot that nobody's even interested in.

Overall, Dare To Be Stupid s definitely one of my more favorite albums from "Weird Al". Like I said above, I like the original material more than the parody work, and this album delivers on that.

Click "HERE" to go back to the home page. For more posts related to this one, please click the labels below.
Posted by The Toy Box on May 31, 2022
Email ThisBlogThis!Share to TwitterShare to FacebookShare to Pinterest
Labels: "Weird Al", "Weird Al" Yankovic, 1985, 80's Album Review, 80's Music, 80's Music Review, Dare To Be Stupid, Music of the 80's, Retro Spins, Weird Al Yankovic