Guns N' Roses took the world by storm with their 1987 album, Appetite For Destruction, and since its release I wanted more. That more came in the form of 1988's G'N'R Lies. 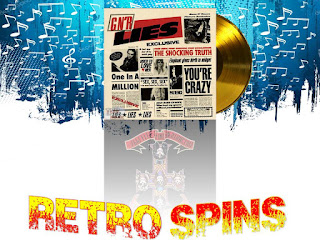 Lies took everything I loved about Appetite, shelved it, and then delivered a cash grab to this high school kid who barely had a nickle to his name most of the time. What was this live / acoustic album?

I didn't have a job in 1988. I barely got an allowance, and when those rare moments arrived that mom would allow us to buy a cassette, choices had to be heavily weighed. As such, when I ended up with what was the Lies album, I was ticked off. To me, it wasn't even worth listening to. I not only hated live music, but also didn't want to hear Guns N' Roses singing slow songs to acoustic guitars.

As time passed, and the age of the internet dawned, I would learn that the first half of the album was actually taken from G'N'R's Live ?!*@ Like a Suicide EP, which was in fact not a live album. Rather, the audience was overdubbed over the studio performances. While this didn't necessarily make me excited about the record, it did help me to look at it from a fresh perspective, and since then, it has grown on me a bit.

In fact, I've also become quite fond of the acoustic tracks, which actually stand out. I mean, how can you hate Patience? It's a staple crowd pleaser from the band. I do tend to favor One In A Million and Used To Love Her, but will pass on, You're Crazy. It was never my favorite on the Appetite album in all of its heavy metal glory.

Though Lies isn't my least favorite album from Guns and Roses, it certainly isn't my go to either. Despite growing on me over the years, it doesn't house the sheer power that Appetite or Illusion (I and II) delivered. At the end of the day, when I put on a G'N'R album, I don't want to be swooned to. I want someone screaming in my face.