Who would have thought that one of the most influential bands of the sixties and seventies would get there start as a glorified cover band? The Rolling Stones self titled 1964 debut features a slew of classic hits, none of which were written by any of the members. While they contributed one original track, Tell Me (You're Coming Back), this song failed to make any major impression. 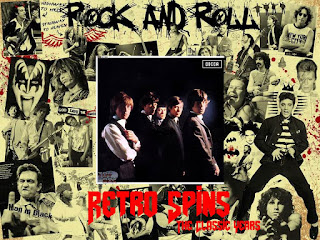 The main focal point of the album is very rhythm and blues oriented. A love letter to artists such as, Bobby Troup, Willie Dixon Chuck Berry and Rufus Thomas. It's not terrible by any means, but it's also not the legendary band that would come to be. It wouldn't be until the group's 1966 album, Aftermath, that The Rolling Stones would achieve the breakthrough they were looking for. The album is also notable for being the first where all the tracks were written by Mick Jagger and Keith Richards.

In terms of my listen, I was a bit disappointed. It was nice to hear the early singing and instrumentation of the group. However, it wasn't the powerful punch I was looking for. While I'm trying to stick closely to debut albums for this particular era of Retro Spins, I can't help but think I should have started my Rolling Stones journey with Aftermath. If I were to base my interest in this group solely on this debut album, I honestly wouldn't bother going any further into their catalog.

Again, this is not a bad album. I get what it is. A love letter from a group to an era of rhythm and blues that inspired them to want to be musicians. However, at the end of the day, it's also not the iconic group they would become.